Posted by lisathatcher on September 24, 2019 in Theatre | Leave a comment

The Seymour Theatre 19 September to 12 October

For Annie Barker, the characters of her remarkable play John intuit each other as much as they see, hear, smell and touch each other. They are each in tune with the ‘music’ of each other’s presence and communication. Each human is reflected in the presence of another human and for some what they see frustrates them and for others it is all part of being engaged with another individual. Annie Barker has made the remarkable decision to divide this comfort along the gender line, with the man of the play decidedly uncomfortable with his reflected self and the women of the play attuned to this mode of communication, and somehow able to take it all less personally. There’s a hint of the witch in an old-fashioned house with three women drinking and laughing, particularly when they admit to a variety of dominating energies that are propelled by objects. Objects such as small scattered brick-a- brack, a piano that plays by itself and a double bed used and unused. For Annie Barker, objects are not systems of judgement, they are mirrors. They can tackle on human form such as the ghost of a husband who can exert control from beyond the grave, a blind witness or a doll with a strangely judgmental expression. The objects in which we see ourselves are the purgatory for those who have yet to make a choice. It is on the precipice of choice that the play John opens. A young couple, trying to decide whether they will stay together or break up arrive at a bread and breakfast. 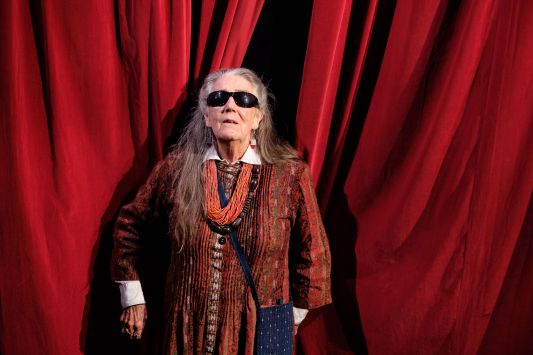 The set (beautifully crafted by Jeremy Allen) then becomes the stage for a modern kind of Sartre’s No Exit where a charming hostess, tends the needs of the young couple who are trapped in the Bed and Breakfast by the weight of their impending decision. They are on holiday together and find themselves at Gettysburg, the scene of that other great battle that ended in emphatic choice. The bed and breakfast run by Mertis Graven (Belinda Giblin) is filled with small watchful eyes that offer solace for Mertis and disquiet for the visitors. Mertis herself is a woman gifted with a gentle joi de vivre that reflects a charming beauty that blossoms in the quiet between the words. And it is here that the true power of Annie Barkers play is revealed. The pacing reflects the music of each other’s presence and the objects reveal their voiceless communication inside those spaces. We tumble blissfully into Mertis’ world, as does Jenny (Shuang Hu) but it is nothing more than a strange a terrible reflection for Elias (James Bell) who finds a darkness inside that even its impetus can’t justify. For Elias to act contains the pain of absurdity, because he could stay with Jenny or leave. He is trapped in a reflection that becomes an equilibrium of possibility. Jenny is caught in the incongruity between action and reflection. She must do that which is absurd to her reason. Inside here, then, reason will come to grief inside absurdity. For the young couple the rational is still that which they seek for solace. For the older women recourse is to something other than rational knowledge and to means other than reason for attaining it. 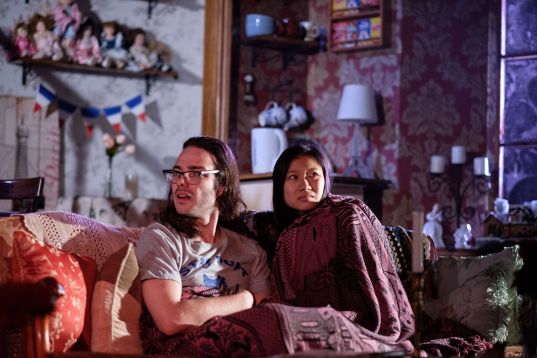 This production of John by Outhouse theatre is an exceptional modern-day evocation of the profound complexity of what it is to be human. Existential in its nature, delicately written, it’s pacing only adds to absorption and complete immersion. Directed with a deft and careful hand by Craig Baldwin, a remarkable study of masculinity ensues as one of those exciting moments when an actor and their director are in potent simpatico. James Bell and Craig Baldwin carefully construct the character Elias to be a modern-day archetype we all recognize. Posited against three extraordinary women, masculinity is revealed to be its own prison of torture, and the frustrated male as a failure of the imagination. James Bell is perfectly matched in the delicate and beautiful performance of Shuang Hu as Jenny, as each wrestle with a version of a tragic narrative.

However, the real power and presence of John lies with the performances of its other two female leads. In a robust and thrilling performance from Maggie Blanco (who is having an outstanding year) John’s supernaturally charged essence spills out and the play’s dimensions become boundless. In a particularly thrilling moment when she breaks the fourth wall and moves beyond the curtain to speak, we the audience are swept up into the magnitude of her beautifully drawn character and left spell bound and breathless in our connection.  Alongside her is an equally remarkable performance from Belinda Giblin as Mertis. Her rendition of the names of groups of birds is a small speech that leaves an imprint that remains with each audience member; but it is only one of the ways that Mertis is able to reach out and touch us. Beautifully and delicately lit by Veronique Benett (who also acts as consultant on the outstanding set) the enormity of this character comes to a kind of gossamery shimmer that leaves us with the impression we are with someone we know and love very much.

Outhouse Theatre Company have a strong connection to Annie Barkers plays and have a simpatico that produces pre-eminent theatre on our Sydney stages. They have reached their zenith with John and we, the very lucky theater goers of Sydney, are able to see it at this time and reap the rewards of such a strong connection. Make sure you don’t miss this play. 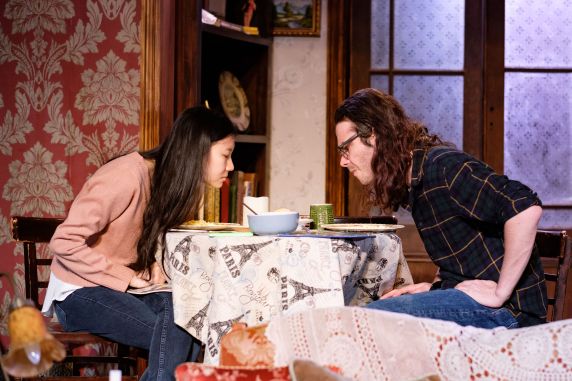