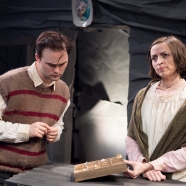 Posted by lisathatcher on July 16, 2019 in Theatre | Leave a comment 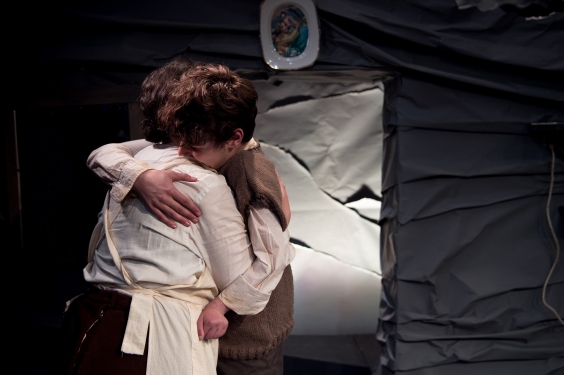 The Cripple of Inishmaan

The specter of the film ‘Man of Aran’ hovers over the top of The Cripple of Inishmaan like a false map that allows for a necessary misinterpretation in the pursuit of truth. The famous film continues to be admired as a documentary, despite its distortion of the lives of those the film sought to represent; A distortion that irritated the locals. Sixty years later, Martin McDonagh writes The Cripple of Inishmaan which reads as a correction, not by attempting to establish impossible to trace facts, but by embellishing the role fiction plays in the emotional survival of those on the island. ‘Man of Aran’ epitomises Robert J. Flaherty’s NeoRousseauism approach presenting the glorification of a simpler and more primitive way of life that existed separate to the modern world. Rousseau refuses written language (you can read ‘book learning’ here) as a distortion of the ‘truths’ that emerge from direct speech, and therefore exemplifies an unencumbered free flowing dialogue. Martin McDonough’s play follows along the lines of Derrida’s famous critique of Rousseau and comes directly from a kind of intuitive reading. Rousseau condemns writing for being only a representation of direct speech and therefore less desirable because less immediate. Rosseau, in this context, privileges speech as the more direct expression of the self. However, he himself confesses that he expresses himself much less successfully in person than he does in his writing. Applying that to The Cripple of Inishmaan, the ‘Man of Aran’ sought to reveal the simple life of the Inishmaan villages by having them speak for themselves in a documentary. However, he found their speech didn’t properly ‘represent’ the image he had of them, and therefore fabricated aspects (particularly the famous shark hunting scene) in order to call forth more authenticity, thereby making his film less authentic.

For Martin McDonagh as expressed by Claudia Barrie, the truth of the village’s life exists in the spaces between their lies. Everyone in the play lies, yet in the remarkably sophisticated life of the Inishmaan villager, the truth is kept in place by and because of these lies. Martin McDonoagh is a subtle writer anyway, but Claudia Barrie (who has a great talent for subtlety) further enhances this with normalised, understated performances from her well chosen cast. Particularly beautiful are scenes between Bartley (Josh Anderson) and Eileen (Sarah Aubrey) in a gentle tussle over sweets. As the play progresses, we understand Eileen lies to the simpleton Bartley about the existence of certain sweets, but that Bartley is offering to keep her secret in exchange for a share of the secret sweets. This very sophisticated exchange takes place around and inside the petty lies the pair tell each other, but the preserved known truth beneath implies a powerful, warm affection between the pair. Familial love is shared in another’s absence, truth is revealed in lies and a stories power lies in the manner and the nature of its telling, not in the body of its knowing. In this way then, The Cripple of Inishmaan is able to correct the NeoRousseau error of the (in)famous film without making any kind of statement against it, thus remaining true to the sophisticated local cultural intellect made available via provincialism. 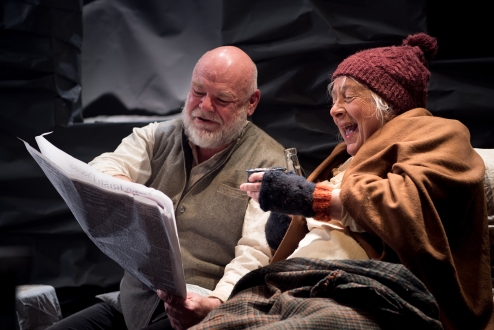 Therefore, in The Cripple of Inishmaan, it is absence that assures the presentation of truth and presence that entails its distortion. Claudia Barrie’s stellar cast each present gentle performances from the delicate budding adult in William Rees’ Billy all the way through to the clumsy warmth of Laurence Coy as Johnny, always evoking an Under Milkwood mystical calm that equates (with great comic effect) to a form of purity of small town ways that both mask and hide the psychic impact of the ferocious and unforgiving harshness of the land upon which they live. Each performance is its own stand out. The enigmatic Jane Watt is a perfect Helen, while Jude Gibson is very funny as the seeking-to-end-it-all Mammy. (Equally touching are the reverse truths dramatically played out between Jude Gibson as Mammy and Laurence Coy as Johnny – here again lies are used to convey the truth of familial love) Megan O’Connell is gently arresting as the rock talker Kate and John Harding is devastating and shocking as the interesting Babybobby. The final nail in the coffin of it all is Alex Bryant Smith who plays the doctor (the only character who tells the truth) to whom everyone lies, and gains no superiority from his scientific separation.

The Cripple of Inishmaan finds its place on our Sydney stages birthed from recent aesthetics we’ve seen in some productions of Under milkwood, but containing its own grace and remarkable agility on the small-scale stage of the Old Fitz’ theatre. Production Design by Brianna Russel includes tasks performed in scene transition that imply a small town going about its daily business and the repurposing that happens in relatively isolated communities. Claudia Barrie brings a flow to these changes that emerge as ethereal and offer contrast to the ferocity and harshness of life. The set is brought to life by the subtle and very beautiful lighting of Benjamin Brockman who equally manages to extend the set to imply an enormous sparse backdrop. Sound is beautifully wrought by Kailesh Reitmans and everything is seamlessly organized by stage manager Elysse Mill.

I’m a bit of a fan of Martin McDonagh’s film writing, but for me, his work is brought to a bigger and more vibrant life on the stage. The understated aesthetic lends itself to the sophisticated engagement between actor and audience that becomes harder to grasp in the passivity of film. Immersion is deeper and therefore the nuances of the writing more accessible. Claudia Barrie as director is a natural fit here, and the sum became, for myself one of the best productions I’ve seen at this theatre in 2019.