Posted by lisathatcher on July 9, 2019 in Theatre | Leave a comment

Fringe Wives Club and The Furies

Stables theatrre 8 – 20 July. You can grab your tickets here.

When one is dealing with a universal structuring principle, like feminism, one always assumes (in principle of course) it is possible to apply the structuring principle to all its potential elements so that we see the principle’s non-realisation as mere a matter of contingent circumstances. To repeat that with greater clarity (and therefore include a threat of misinterpretation) when we talk about feminism, our conversation is based upon an assumption that feminisms primary goal is to remove the road blocks women experience. This implies that which holds women back is a complex set of circumstances (embedded in institutions such as narrative and the law) that seek to keep the female in a subordinate position primarily for the purpose of supporting the action oriented male ego that (up until recently) has been credited with all accomplishments. The production Glittery Clittery currently showing at The Stables Theatre falls into this category. Among feminists, there is a sense that if we finally find the word to explain, if we say it loud enough, long enough and strong enough The Message will get through and we will be able to forge ahead. There is great value in this approach, not the least of which is long-time feminists like myself get to enjoy the enormous pleasure of seeking young talented intelligent females pack their politically on point message into a very entertaining show. 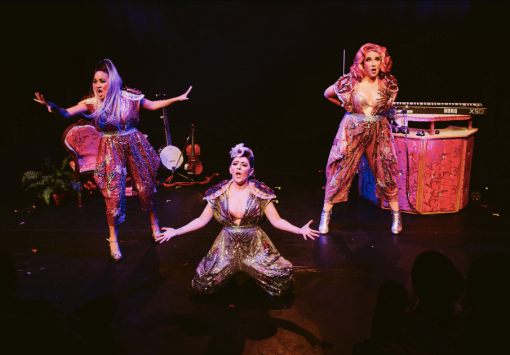 For The Fringe Wives Club and their show Glittery Clittery, deterrence is the best way to deal with something that they suggest is as simple as bad behavior – not a system designed to solve some other kind of problem. As they say in their song Change it up, ‘This shit is no invention, we’re gonna change it with prevention’ this leans heavily into the enormous successes of what is derogatorily called ‘political correctness. PC might be contentious, but it has to be understood, it has made the world a demonstrably better place for those of us who no longer have to live with some forms of sexual oppression enshrined in law. The success of political correctness and the actual change it has wrought in peoples lives (such as my own) embolden feminists to reject theories that the removal of misogyny and a destabilisation of the patriarchy is complex and embrace the idea that one simply needs to Be (not think, act) nicer, kinder, more accepting of each other, and the world will inevitably be a better place. If this sounds naive, remember, feminists are living in the small early successes of this real accomplishment.

This mantra imbues the show, including a small warming speech made toward the end of the program by Rowena Hutson who claims some recent gains and offers a warming cry for more territory and greater action. Glittery Clittery is ostensibly a cheerful show, though it packs its punches with statistics that remind us the world is a cold and dangerous place for women. The combination of these facts and the suggestion that we can simply choose to stop the hatred toward women, result in a shocking hour of theatre that strikes the necessary chord while properly entertaining the audience. Performances by Laura Frew, Rowena Hutson and Tessa Waters are cheerful and robust engendering closeness and warmth with the audience. Direction by Clare Bartholomew focusses on energy and joy.

The political message is on point, hammered home and gleefully front and center. For feminists this is gratifying and makes the show very enjoyable. These three women are funny, clever and powerful and know to take The Message seriously, but not themselves. This results in a great evening filled with lots of fun.