Home » Theatre » Blood on the cat’s Nsck – Montague Basement and Fassbinder find the real inside ourselves. (Theatre Review)

Blood on the cat’s Nsck – Montague Basement and Fassbinder find the real inside ourselves. (Theatre Review)

Posted by lisathatcher on May 29, 2019 in Theatre | Leave a comment 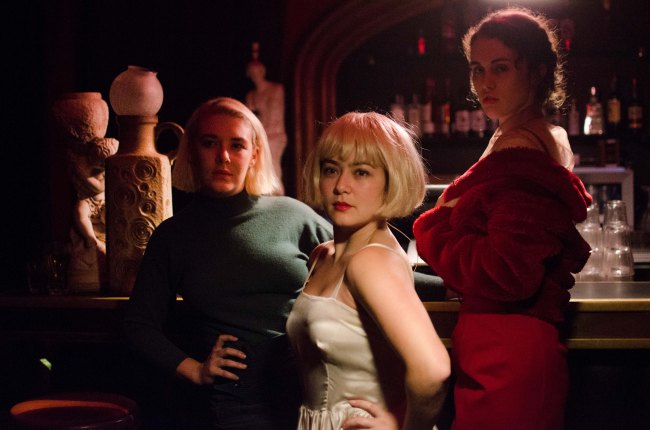 Blood on the cat’s Neck

May 22 to June 1 You can grab your tickets here.

For Rainer Werner Fassbinder, the broad scale problems we see about us find their nascency in the micro arguments, power plays and petty aggressions we take out upon each other. Traditionally seen as in response to broader conflict, Fassbinder sees these conversations as causal rather than reactionary. Today, an awareness of Fassbinder’s point is made via language wars predominantly played out on social media. The rise of a new nationalist white power rides on the back of individual rights verses human rights embodied in language and the right to say what we want about another person. Entrenching opposition to systemic language-based oppression in rule of law may have been clumsy, but no one can doubt it has brought the underlying structure to the surface. Who would have guessed that asking white males not to denigrate women and non-whites would have directly led Nazi flags and similar paraphernalia becoming a banner under which scores of our population will march? Blood on the cat’s Neck tells us Fassbinder would have and did predict this. The post-war German Fassbinder intuitively knew language is key to power plays and aggression, but he also understood it is us, and how we are with each other that calls forth governments, mass condemnations and wars. For Fassbinder, while we continue to play childish power games and follow nit-wit feelings willy-nilly, expressing those in reactionary postures, we will be condemned to our own nonsense. It is this take on Blood on the cat’s Neck that strikes at the deep resonating chord for director Saro Lusty-Cavallari and it is this chord he seeks to provoke in his audience in Montague Basements latest offering in the Bordello Theatre in Kings Cross. 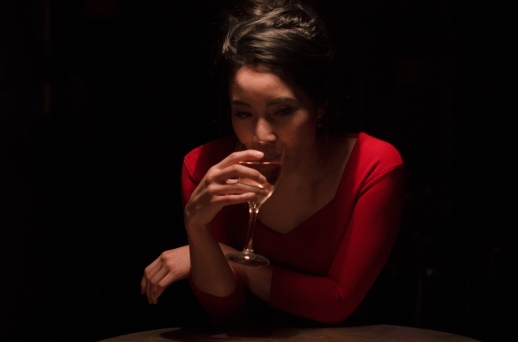 Saro Lusty-Cavallari locates us in the deteriorating lush surrounds of the Bordello Theatre. Filled with a decaying elegance, this becomes the perfect location for Blood on the cat’s Neck and it’s Hollywood inspired acerbic observations. A deteriorating elegance filled with decrepit people embodying Hannah Arendt’s banality of evil, Saro Lusty-Cavallri asks his audience to move from scene to scene around the room as we witness the decay of bourgeois sensibilities. By encouraging movement in the audience, the director keeps us inside and outside of the action, separated by our judgement, unified by our proximity. We walk among people we know, people we are. We are confronted with the horrors of everyday speak, the language of our mOther tongue. Fassbinders characters are us. They encapsulate our justifications, our stupidities and above all our refusal to act on behalf of change. In this way the discourse and the desires of others around us are internalized. We might follow Phoebe Zeitgeist around the room but she is as alien to us as she is to the protagonists. We are not the alien in the room, we are the silent characters, moving around the set that is our lives. 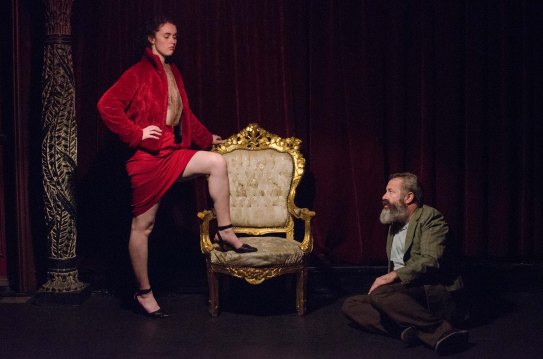 For Fassbinder, the language that does damage is our own, the difficulties of the world are at our feet. In Blood on the cat’s Neck we see a viciousness in ourselves than can’t be misunderstood to be someone outside. Phoebe Zeitgist is there to inform us of our subjectivity. She is the Other, everyone else is gathered in the Bordello Theatre. With Pheobe Zeitgeist in the room we become a subject with respect to the Other inside language or law. In other words we are subject, but only in relation to our syboloic order in the Lacanian sense. We are positioned against her as our Other. As Phoebe Zeitgeist moves around the room, and we follow her she witnesses characters (us) exchange in power games that exist as a sort of primordial overwhelming experience of pleasure/pain or trauma. This engagement with existence is excessive and leads to a sense of being overwhelmed or disgusted yet simultaneously fascinated. People seek to get closer to this experience (what the French might call jouissance) and move away from it out of fear in multiple power moves directed against other human beings. These may be engagements consisting of the most ephemeral connection (like theatre itself) or they may be the taking of another’s life. For Fassbinder, and for Saro Lusty-Cavallari, they are one and the same, and a tangled web of nothingness that gives rise to Hannah Arendt’s banality of evil. When Phoebe Zeitgeist speaks us back to ourselves, she is our Other sucking at our throats. Mirror, antagonist and friend. 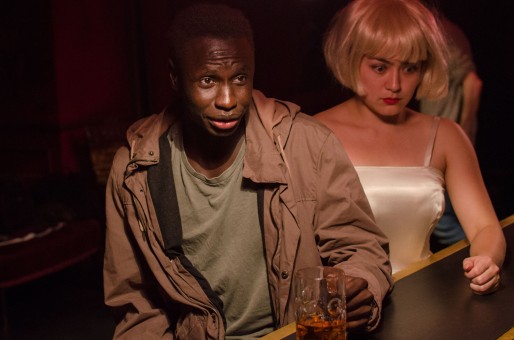 This is an excellent production by a small Sydney theatre company that keeps getting better and better. Already prolific and establishing themselves as reputation for the avant-garde, Montague Basement have tackled another difficult piece here with the alacrity and intellect we have come to expect form them. Their engagement with film continues (they produced an excellent Nosferatu earlier this year) as Saro Lusty-Cavallari takes this Fassbinder play and reproduces the ‘Antiteatre’ experience of Fassbinder’s early theatre days that introduced his cross over into film. This production feels like a reach for something similar to that which the Munich based Action theatre of 1967 was reaching for in the wake of world war two amid fears of bourgeois complacency and the rise of a fascism fed by capitalism. Director and producer are reaching for a shift in the audience’s relationship to theatre itself, to a move away from passivity to what they describe as ‘immersion.’ Whether the audience comply with this opportunity or refuse, they sill choose. A choice we can’t escape.

Performances are all strong, with no exceptions. Stand outs include Deng-Deng, Alice Keohavong and Emma Kew who each bring additional magnetism to their roles. Many chilling conversations take place but few are more unsettling than one between Alice Keohavong and Deborah Galanos regarding a cheating husband, but this is indicative of much of the passive aggressive way that people gut and devour each other. Walking among them is the excellent Laura Djanegara as Phoebe Zeitgeist who carries the power of the play on her very capable shoulders.

In addition to a fine cast and excellent theatre space, creatives add a special something to this production of Blood on a cat’s Neck. Sophie Pekbilimli’s work with lighting is a particular stand out, as is Saro Lusty-Cavallari’s sound. Sound and lights create an ambient voice that is quite disturbing, particularly when popular ‘mood-evoking’ songs and mood lighting are used to ground the audience in their own version of a certain experience we might be watching. Costume from Grace Deacon sees everyone draped in blood red cloth, which works wonders, as does Imogen Gardam’s instructions and elevator management that makes transitions smooth and workable.

This production from Montague Basement is a significant leap forward for the team in their trajectory. 2019 has been a good year for them, and this current production shows a definite shift in style and wit that translates to a powerful audience experience.