Posted by lisathatcher on May 20, 2019 in Theatre | Leave a comment

Sherlock Holmes and the Ripper Murders

In 2012, Brian Clemens expressed a dissatisfaction with the television series Sherlock in an interview on Zani. It is after this, he writes Sherlock Holmes and the Ripper Murders, a play very much in the tradition of Arthur Conan Doyle’s original plays, possibly hoping to restore a bit of the original pizzazz to the famous character. However, this is a new century, both post modern and post truth, and Brian Clemens has a reputation for writing very interesting and successful female characters. Enter Kate Mead (Zoe Crawford) a ‘female’ style of genius set up to match Sherlock Holmes (John Willis-Richards) point for point. If Holmes’ ability to detect detail is all part of his genius, then Kate Mead’s connection to her intuitive gifts provides the perfect female counter-point. In this way, Sherlock Holmes and the Ripper Murders becomes a proper amalgam of Arthur Conan Doyle’s creation going about his business with a Victorian version of Emma Peel. Not stopping there, Brian Clemens makes Kate a single mother, writes Mrs. Hudson an interesting personality and gives the victims of Jack the Ripper a voice. While I wouldn’t go as far as to say this is a feminist take on the Sherlock Holmes mythology, I will say it’s a female empowerment version of which Arthur Conan Doyle might have approved. If Sherlock Holmes’ ‘genius’ is expressed through his finely tuned practice of turning the self into a spectator and the world into a spectacle, then Kate Mead produces an identical ability via ‘intuition.’

To add to the interest in this production, Jess Davis comes on board to direct. Swiftly establishing herself as a director keen to make her mark on female-driven creative works after graduating in 2018, she proves herself a wonderful choice for The Genesian theatre to add the feminine perspective to this fascinating play. An eye on the ‘feminine detail’ assists the female-centric aspects of Brian Clemens’ work to come to the fore over the top of our always already listening for Arthur Conan Doyle as originator. We see Sherlock Holmes as a respondent to women and his intellect guiding him toward a relationship a wise person understands to be advantageous. The mythology of ‘the lone genius’ of which Sherlock Holmes is one of the most famous proponents gets a much-needed psychological overhaul through Brian Clemens and Jess Davis. For hard core fans, there is nothing to fear (this production very much harkens back with great respect to its originator) but for those of us a bit ‘dissatisfied’ with the much-lauded television program, this version both restores the original and gives Sherlock Holmes an upgrade that feels very much synch with his time. 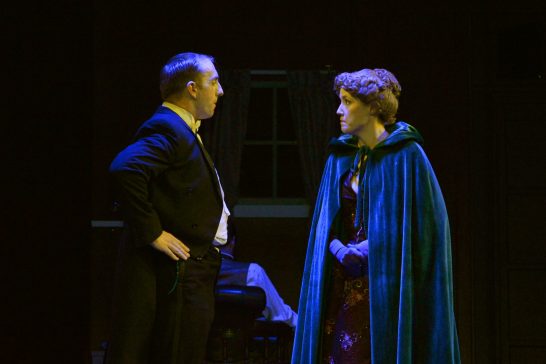 Of equal fascination is Brian Clemens dealing with mythology in this Sherlock Holmes story. Inside the fictional characters of Holmes and Watson, Brian Clemens looks at the stories we tell ourselves and their relationships to actions occurring in the world. The Ripper Murders themselves unfold to expose conspiracies through the ages, while the mythology of genius is gently pulled apart to reveal Sherlock Holmes as a man tired of being alone who wants to carve out a real life for himself. Kate Mead is important because she is as skilled and intelligent as he, but she remains true to a traditional Victorian ethos of femininity, which seems to suit both Sherlock Holmes and Arthur Conan Doyle. If the myth of the genius pits the detective against convention, tradition, and morality as if he were trying to operate against the vagaries and stifling forces of his environment, Kate Mead occurs as a breath of fresh air, a movement toward the world, not away from it. While Arthur Conan Doyle never connected Sherlock Holmes with a woman, he did have Irene Adler outwit Holmes in ‘A Scandal in Bohemia,’ and it appears Brian Clemens uses this connection as a basis for the warmth between Kate Mead and Sherlock Holmes. What was stolen from us in that story, is gifted back in this, and it makes Holmes a finer, and better-rounded character for it.

Which brings us to Jess Davis and her excellent casting choices for This production Sherlock Holmes and the Ripper Murders. In the primary role is the second appearance for John Willis-Richards on the Gensian stage, and I have been lucky enough to see both. He is a natural Holmes, warm toward the audience, cool toward the other characters, charming not snide, witty not supercilious and intelligent without being too egoistic. John Willis-Richards offers us a Sherlock Holmes we would like to know, rather than one we fancy we might secretly be.

Peter David Allison is one of the stronger performers as John Watson. Gifted many of the best lines, just as it is thrilling to see Holmes take on a more believable character, it is wonderful to see the constantly befuddled Dr Watson with a little more charisma for himself. Rounding out the three leads is Zoe Crawford as Kate Mead. Zoe Crawford is a fine young actress, engaging and pleasant, she is careful and respectful of her role as a clairvoyant, calling forth the dignity and respect Holmes bestows upon her in character. Her very fine performance makes it eminently believable that Sherlock Holmes might develop a bit of a crush on her.

James Charles, David Stewart-Hunter and Warren Paul Glover give us the wisdom of age in their respective roles, adding much gravitas and ensuring the comedy doesn’t get too carried away – even though they are funny when the time is right. Peter Bertoni, Matthew Carufel and Douglas Spafford respectively play villains, the wounded and the ignorant to great effect. Matthew Carufel in particular is a dark and malevolent force as John Netley. Sandra Bass, Celetes Loyzaga and Heaven-Cheyenne Campbell are our wonderfully witty and very present women. Given better than usual lines by the writer and a director who understands what they represent, these charming actresses bring their best to small roles and successfully remind us that behind the conspiracy theories of the Ripper Murders are the very real deaths of women that seem to become so very normal.

Important for Jess Davis’ ability to make such a wonderful job of this interesting play is the group of creatives around her who bring the production to life. On Bronte Barnicoat’s simple and subtle set that successfully translates to multiple worlds, Michael Schell brings vibrant lighting and sound to the production that moves the audience to great effect. Peter Henson’s costumes, particularly the women-folk do very well to locate us in place and connect us to time. With assistance in direction by Amahlia Day, the production shines with the many hours of work and various skills behind it.

The Genesian Theatre always brings something extra special to the amateur stage, but Sherlock Holmes and the Ripper Murders has something in addition to the usual high standard. 2019 has been a great year for The Genesian Theatre, and this current production is just another in a line of wonderfully entertaining shows.