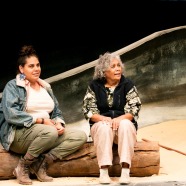 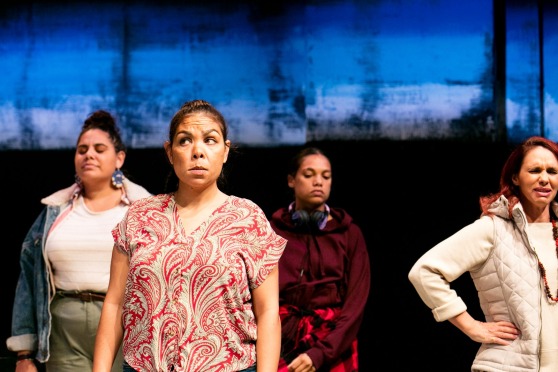 In Top Girls, Caryl Churchill asks important questions of women that, according to Winyanboga Yurringa writer Andrea James, are universal, and yet require the destabilizing force of theatre as a trip in another’s shoes to expand beyond certain kinds of boundaries. Top Girls asks women: Is it more important to break out of a cycle of poverty and make something of yourself, or to fulfil your responsibilities to your family and community? If you are a woman, will this influence your answer? How do we balance the demands of career and motherhood? What does success actually mean for a woman? When asked by Caryl Churchill, one is forced to undo the barrier of white-ness, if one has recognised it at all. In Winyanboga Yurringa, Andrea James reveals these questions, while the same for Indigenous women, are also dramatically different. Poignantly she includes the character Jada (Tuuli Narkle) who presents as a Bindi Cole Chocka archetype challenging her character sisters and the audience into understanding what having Aboriginal heritage can mean. Given the Top Girls referencing, this character in particular presents not as some sort of symbolic connection point, but a more complex reference for diversity and recognition. Her giant yawp is declared in a beautifully wrought scene when Tuuli Narkle stands before us and cries out her pain and heritage in the middle of this spiritual desert where these women gather. The audience is delivered a powerful understanding that, just as we can’t know all women through Caryl Churchill, we can’t know all indigenous women through Winyanboga Yurringa and that the ‘question of woman’ is an entirety in itself and has no answer. 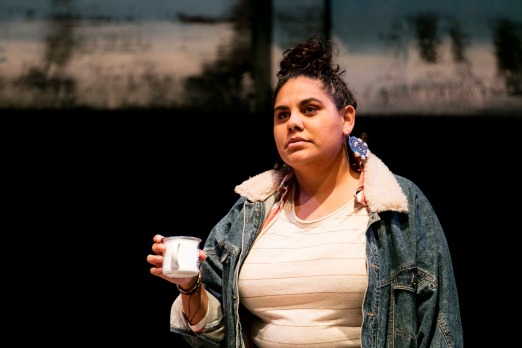 Winyanboga Yurringa is six Indigenous women gathering on the bank of a river. The central question of fulfilling obligations to self, the spiritual, the family and the community are the always already undercurrent of the way the women connect. History is visited upon the living through Auntie Neecy (Roxanne McDonald) heralding the connection to land. The women vividly imagine their ancestors walking the land upon which they sleep and they are encouraged by the elder woman to pause and ‘feel’ the history of their people around them. The six women each bring their difficulties and life challenges with them, most of which are thoroughly modern, and yet truly emblematic of what it is to be woman in our currant day. Difficulties are not erased by a connection with heritage. The spiritual, the history evokes a platform from which to extract strength and courage. Of particular note is the character Chantelle (Dubs Yunupingu) who is struggling with ‘normal’ teen anxieties on the surface, and yet suffers from crushing low self esteem that informs choices that could easily have a tragic effect on her life. Misogyny is never far away, as is always the case with women, but these women live with a misogyny informed by appalling racist conditions that deepen the effect of everything. 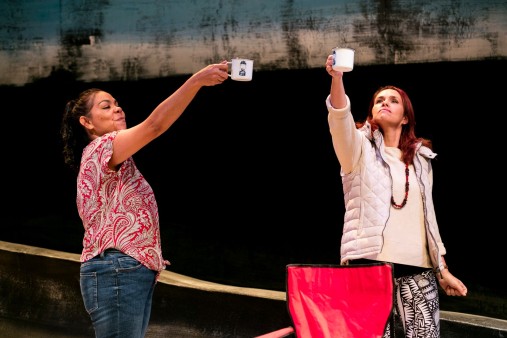 From a feminist perspective, the power of female unity and togetherness presents as a combative force against the dialectics of institutionalised gender roles and sexual discrimination. In Winyanboga Yurringa this is emphatically and thoroughly brought to the fore. The individual struggles of these women can never find success because the system is too well rooted to overcome. A possible answer is to reconnect with other women in order to establish and refine identity and redesign their way of struggling against the patriarchal system. Eliminating the well-established patriarchal system needs more than copying male roles and recalling women’s imposed natures and identity. In this new world, mothers might be lesbians, Indigenous women might have white skin, and some will have the trappings of independent wealth. Unlike Top Girls, Winyanboga Yurringa ends on a positive and optimistic note, but only after the depths of challenges before women have been examined. There are no solutions except to keep talking through all our angry frustrations and make every effort to connect and support each other. 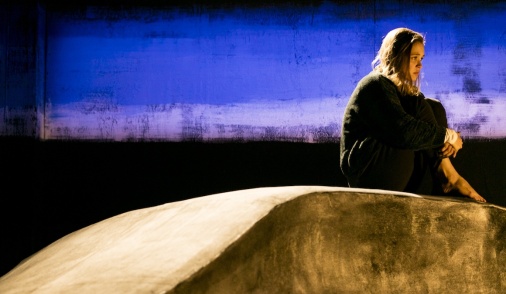 Masterful direction from Anthea Williams reveals a production in proper command of its important subject matter. A rich and elegant set by Isabel Hudson richly conveys the beauty of the Australian desert while her important costume design is monitored by the cultural design advice of Danièle Hromek. Dr Lou Bennett AM serves as cultural language advisor to the production. Precision lighting design by Verity Hampson brings an elegant backdrop to vivid life and enhances the warm connectivity experienced by the room at the end of the production. Composition and sound design by Steve Francis and Brendon Boney are of particular note in the production, as the rich musical sounds that gently slide between emotional scenes forge a linchpin upon which the audience experiences a broader sense of the world the women inhabit. Music is a powerful connection point, not just for these women, but also for the audience, offering an opportunity for us to feel the productions messages with greater depth. 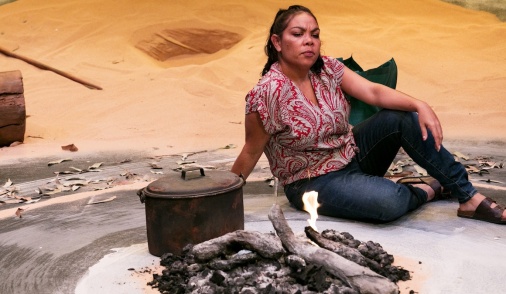 Central to the success of Winyanboga Yurringa is six excellent performances called forth from the direction of Anthea Williams. Roxanne McDonald is particularly arresting as the physical presence of all that has travelled before her. A fiery performance from Angeline Penrith connects us to the righteous anger we expect to see, and it is tempered and joyfully partnered by an intelligent performance from Dalara Williams. Dubs Yunupingu and Tasma Walton provide the poignant dilemmas of the modern Indigenous woman and each deliver powerhouse punches in their performances that hold reveals that draw us closer to understanding this small community of women.

This production of Winyanboga Yurringa currently showing at Belvoir is a warm hearted, generous effort that connects us deeply to its subject matter and call forth interesting questions about what it is to be female and what it is to be an Indigenous female in Australia. It is joyful, funny and yet powerfully connected enough to help the audience understand its important themes. It offers both a wonderful night at the theatre and a special opportunity to possibly see something previously hidden. Don’t miss it. 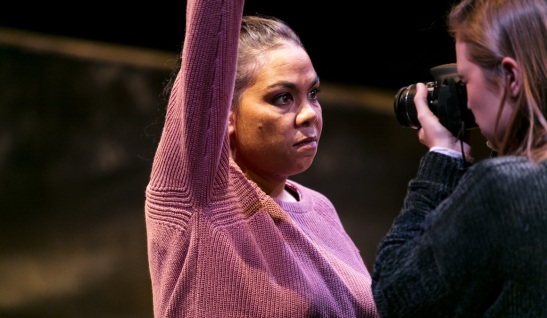