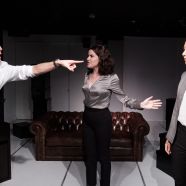 Posted by lisathatcher on May 5, 2019 in Theatre | Leave a comment 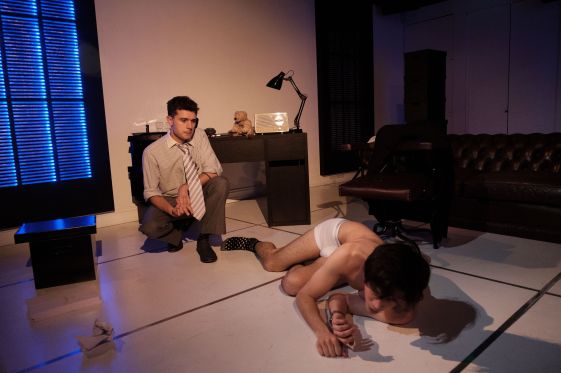 Secret House with Limelight on Oxford

Currently, it is presumed, Kafka’s work exists outside of any attempt to impose meaning despite his works being remarkably suggestive texts. Not quite symbolic, not quite surreal, not quite absurd, his writings are the sort that can exist in a feedback loop of interpretation as one moves through life. Writer Tom Basden has taken the courageous step of cementing his interpretation in paper with his excellent Joseph K. To bless Sydneysiders, the wonderful theater company Secret House have brought this extremely interesting interpretation to the thrillingly versatile space at Limelight on Oxford. Joseph K gives us a kind of Kafka served up when the world is far more stressed in demographic and environmental terms and much more prey to globalized forms of commerce, communications and control. We now live in a documented maze of action and thinking committed to cyber memory, virtual states and digital orders. Kafka can’t possibly have known about these things, but there is something about The Trial that enervates and enchants us even if we know Kafka can’t possibly encompass the full scope of these innovations – even as magically prescient as Kafka was. And so we find Tom Basden writing, mirroring the predicament of Joseph K himself with a play that identifies the character dealing with escalating ideations he can neither master nor subordinate. Kafka is Joseph K, Tom Basden is Joseph K and we are all Joseph K in the remarkable connection we somehow share with this character. 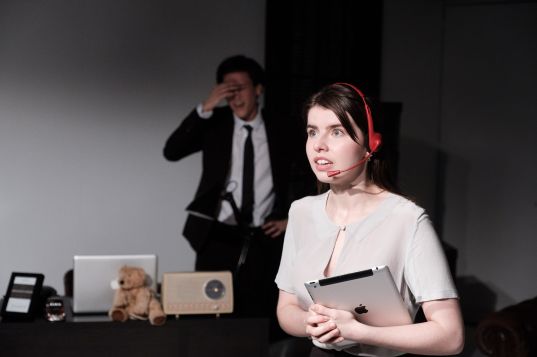 So, Sean O’Riordan delivers us these stunning images of Joseph K according to the words of Tom Basden. Inside Joseph K are familiar terrors (a Lawyer who never completes his works and moves all his clients about as if they were dolls) amid the overall shocking premise of an arrest with no discernable crime nor accuser. Surrounding this are the endless architectures of cybernetic devices, recursion exploits, unprecedented computational storage capacities (a stunning scene at the Swansea national administration hub) which amass so many variants, counter instances, modifications and qualifications that the calculable reaches its very limits and is pushed in the direction of the incalculable. In other words, we end up with so much to do that nothing gets done. Joseph K (Danen Young) sits on the cusp of procrastination with its horrific splashes of red and hard-wired mental instabilities as the eventual impact of sheer multiplicity of the mollifying conditions that recursion can assimilate and the lack of processing power at the cognitive level creep up and over the top of him. The only movement comes from a further sinking into one of Joseph K’s occasional manic states. 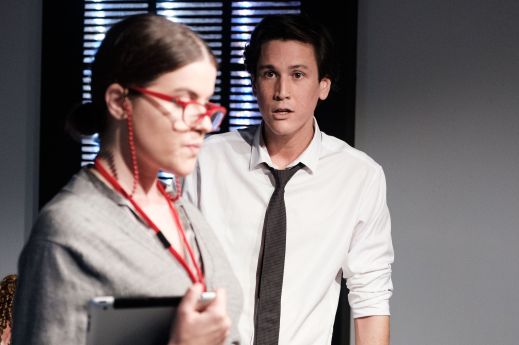 Therefore, we start to see the madness of Joseph K as our own madness, for to not be driven mad is to be one of the accusers. When Joseph K presents himself as final, closed and unconditional, we recognize compliance as an end state that brings relief, mostly of a psychological nature. We feel the same when the nightmarish journey of Joseph K is to end, simply because we register (like him) the end of an inscription of irresistible persistence and a finality. Perhaps most shocking of all about Joseph K is that all this effort to produce nothing has not left the individual (ourselves) any better off for all the effort of noticing. Joseph K pivots on a hinge that swings him back and forth between “inside the system” and “outside the system.” This then becomes a feedback loop between a systemic inside and outside neither of which can be established or compartmenalised in truth or purity. Is this not how we feel most of the time but particularly when inaction grips us? Action then, that which Joseph K may have taken up for himself (one of the few true actions he takes is to fire his lawyer) would not necessarily have resolved itself in a better life. What we understand from Joseph K is that it simply would have helped us outrun a system seeking to control us, but it commits us to an endless run.

This production of Joseph K by Secret House is a strong offering from a theatre company that continuously surprises with its ability to deliver the goods. Another superb collaboration between Sean O’Riordan and Secret House, great things have come of the decision to move away from classic plays and inhabit these other interesting text-based worlds. Sean O’Riordan offers a stunning series of moving images on a beautiful set by James Smithers that fully appropriates the designer intimacy of the Limelight Room and still creates an enormity inside the alluring space. With outstanding costume design by Hamish Elliot and evocative lighting by Alex Holver, the exquisite nightmare state is properly aroused under Sean O’Riordan’s control. With it all accurately managed by stage manager Milly Grindrod and choreographed by Virginia Ferris, Joseph K becomes a sophisticated visual experience that leaves one immersed in beauty while managing our own internal nightmare. 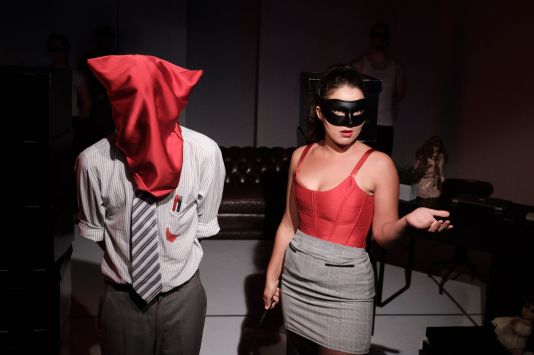 Alongside the resplendent visuals (there is a doll scene that will take your breath away immediately after interval) are fine performances that properly give a strong sense of the absurdity essential to the nature of the story telling. Sealing it all is an excellent effort by Danen Young as Joseph K himself, who properly calls stage power to himself and away from himself at key interval’s, allowing for the disarming oddness we experience in a dream-like state. This is a great performance, made all the more interesting because as the play progressors we feel so keenly connected to Joseph. A strong group of young people play opposite (Sean O’Riordan does a great job with a large troupe of enthusiastic performers) with standouts in Tim Kemp as the lawyer and a glazier (!) and Phoebe Heath as Rose and then Leni. Both essential characters to the plot, each draw great caricatures that becomes increasingly funny as absurdity rises.

Along side them, Georgia Brindley and Michael Brindley are extremely funny as cupboard dwelling officers determined to do their job well and Matt Bartlett is marvelous as the long-suffering Morton who one can’t help thinking may hold a key to Josephs salvation. Elouise Eftos is extremely funny (and wonderfully odd) as Alison, Joseph K’s sister James Smithers is (as always) excellent in his multiple roles, but particularly as the put-upon Block. The cast is rounded out with the very clever Deborah Faye Le who horrifies us as the work colleague and Naomi Lees who is equally funny as a girl draped across Joseph later in the play.

Jospeh K by Secret House is another wonderful production by this clever theatre company who keep getting better and better. Their productions shone at The Depot Theatre, but there is something extra special happening to them in The Limelight Room at Limelight on Oxford and they are forming an enormity that engulfs us in a thrilling way in the new space. The move they’ve made away from classics is working very well for them and producing deeper works that resonate. Joseph K is yet another wonderful independent production on the Sydney scene. Don’t miss it. 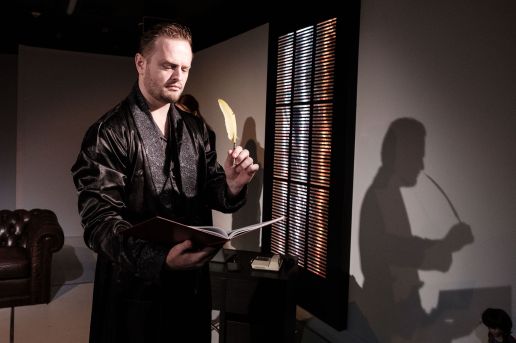