Posted by lisathatcher on April 22, 2019 in Theatre | Leave a comment 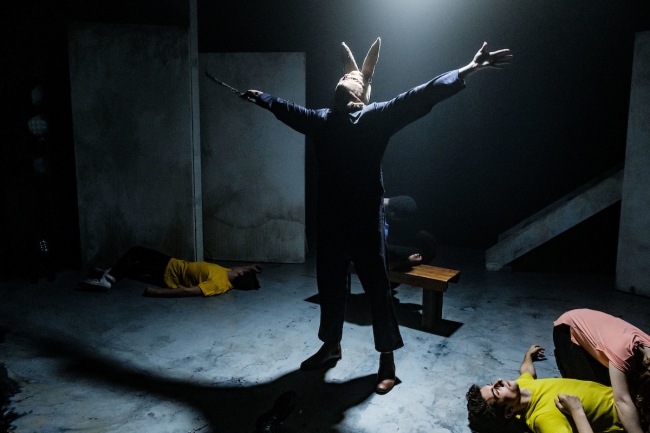 Postmodernism is supposedly a widespread and elusive phenomenon that remains as yet, not properly defined. It is associated with the erosion of universal categories, the collapse of faith in the inevitiablity of progress and the breakdown of moral clarities. It has been identified as entailing a profound loss of faith in master narratives and a disenchantment with the teleology of progress. In short, it encompasses a crises of cultural authority. The postmodern world is an unstable one where traditional categories break down and master narratives of the universal (that is white, male, monied and hetrosexual) Mastery are lost and grand narratives are broken down. Often associated with the post 60’s attitudes of rebellion against authority, by and large Postmodernism is a refusal of stresses such as the Holocaust, the bombing of Heroshima, the Vietnam war, South African apartheid and other acts of insane inhumanity. Associated with a challenge to modernisms distinction between high (art world) culture and low (mass) culture. Mass culture is said to produce pleasure which inscribes the consumer into the dominant ideology, while the decentered text takes an adversarial stance against bourgeois society. Enter ‘The post modern Horror Movie’ as the most potant and revelatory symbol of a postmodern rage against the bourgeois. Unlike the traditional horror film of castles and closed endings, post modern horror film locates the horror in the contemporary every day world where experts are replaced by ordinary people and women play a more prominent role as both victims and heroes. 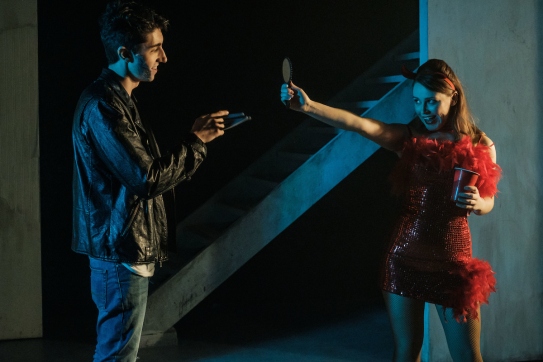 The first question that arises with Alice In Slasherland, is why didn’t horror like this hit the theatre stage earlier? If the post modern horror film is a direct assault on bourgeois culture, it needs to attack at source. Surely theatre is the holiest of holies and theatre critics the high priests of the white cultural temple? Alice in Slasherland contains all the tropes of the horror cultural assault: there is a violent disruption of the everyday world, there is a transgression violating boundaries, the validity of rationality is questioned, and there is no narrative closure. All that is missing is the bound experience of fear. However, fear in the horror film exists to expand a dynamic between the film and the audience – something theatre carries within itself inherently. In this way, Alice in Slasherland is greater than the typical post modern horror film due to its situating itself in theatre. Perhaps if it depicted the mutilation of an audience on the stage, it may have approached more meta horror, but it satisfies regardless with its refusal of polish built in to a script that by its very presences demands to be included as part of the theatre cannon. Only inside the post modern horror genre can bourgeois theatrical perfections be questioned, and Alice in Slasherland incorporates its antiestablishment credo with perfection. 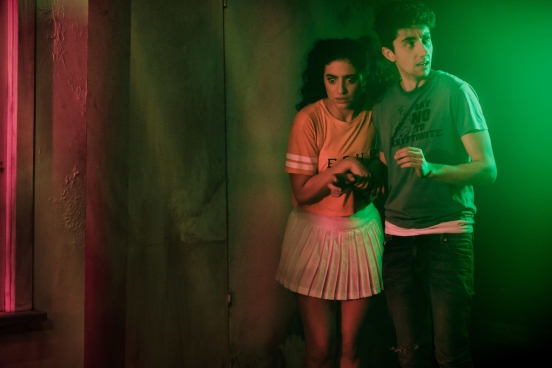 For director Rachel Kerry, the monster signifies what Julia Kristeva calls the ‘abject,’ that which does not respect its borders, positions or rules. The monster is the place where meaning collapses. Rachel Kerry bonds this monster (and there are plenty of them in Alice in Slasherland) with theatre itself by refusing direct homage to the film genre, and allowing theatre itself to become horror. The inclusion of a cabaret style devil (Laura Murphy in a stand out performance) and a brilliant co-ordinated kill scene played out to Bonnie Tylers ‘Total Eclipse of the Heart’ ground the production in the theatrical, forcing more of the intellectual critique horror represents rather than homage to the genre itself. In this way, we are left with an assault on the borders of ‘good’ and ‘proper’ theatre rather than a silly night of horror movie gone wrong. The ultimate refusal of ‘film’ is personified in the character Edgar (magnificently performed by Justin Amankwah) who is a teddy bear puppet created by Indi Redding. Puppets are the realm of theatre, and are only marginally successful in film for the same reasons magic can’t quite work. The demon infested Teddy Bear is not a theatrical ‘Chucky.’ It is a proper theatre puppet, part of the cast, complete with puppet master and maker. Edgar also does not respect the borders, positions or rules of theatrical perfections, and therefore exists as abject horror to theatre. Alice in Slasherland violates the cultural categories of theatre and for this reason we feel the need to see it’s monster killed off, so that order can be restored to the stage.

Rachel Kerry does a stand up job that involves not a little courage in directing Alice in Slasherland. All those connected to this production deserve hearty applause for the genuine courageous stand of creating discombobulating, anti-bourgeois theatre in a very conservative critic-controlled town. The cast are well chosen, particularly Stella Ye as Alice who gives a physically grueling performance the light and easy touch the demon possessed need to evoke. Laura Murphy is superb as the creepy-cabaret villain (no spoilers here) and Jack Angwin is agile and thrilling when he plays no less than five separate characters to perfection. Justin Amankwah is fantastic as, not just the voice of Edgar but the puppet master also and Josh McElroy puts in an appropriately scary turn (actually, he’s very scary) as the bunny villain Jacob. Bardiya McKinnon brings the entire show together as main character Lewis (he also produces the show) and Mia Morrissey is the eponymous female hero who cuts against the Cartesian construction of reason as inherently masculine and associated with mastery and the repression of irrationality. Lewis and Margaret are the perfect post modern horror heroes typing delightfully against stereotypes while gleefully adhering to essential genre tropes. 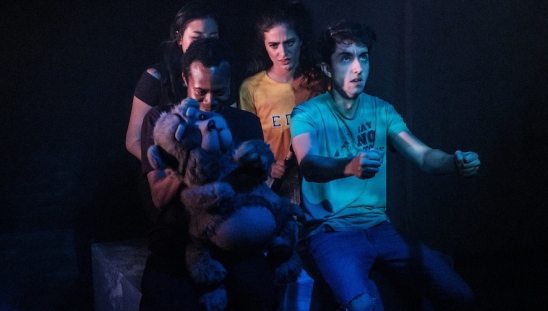 Set construction is a messy beautiful design by Lauren Peters and costumes look like a total blast to make as designed by Kate Beere. Superb combat and movement design by Nigel Poulton, Jack Crumlin and Tim Dashwood makes co ordinated fight scenes original and delightful and a genuine pleasure to witness.  Susie Henderson’s videography enhances and fattens out the narrative trajectory – not to mention references film genre homage. Sound from Julian Starr and lights by Benjamin Brockman call forth the true horror elements for the play. With supports by Assistant director Harrison Sweeney, assistant stage manager Jocelyn Chalmers and Amelia Campbell as associate producer, this large dedicated team bring all the muck and madness of this clever deconstruction to the Old Fitz Stage.

The post modern horror genre constructs an unstable open-ended universe that offers up an ordeal to be survived. Watching Alice in Slasherland is as much an exercise in mastery as controlled loss substitutes for a loss of control. In the end Alice in Slasherland exemplifies the fear of loss of control that flawless production qualities in theatre represents. We are not, in the end, overcome by the monster and we are relieved from the fiction that theatre and life are ordered and safe. Alice in Slasherland lets us know that the theatre we fear is actually a fear of living. And in that goal, it is entirely successful. 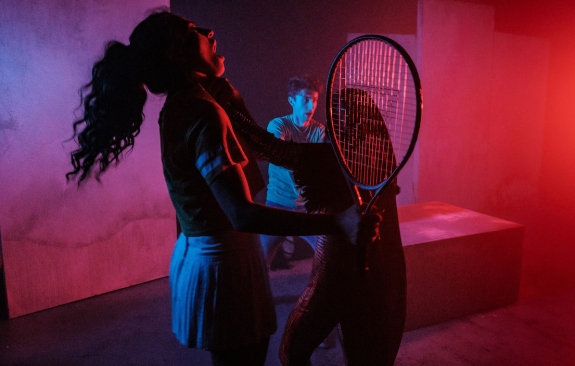