Home » Theatre » How To Change the World and Make Bank Doing it – The bloodsport of charity fundrasing. (Theatre Review) 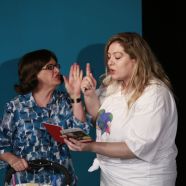 How To Change the World and Make Bank Doing it – The bloodsport of charity fundrasing. (Theatre Review)

Posted by lisathatcher on April 21, 2019 in Theatre | Leave a comment

How to Change the World and Make Bank Doing It

It’s difficult for those of us constantly coming up with new ways of avoiding the “commission monkey” in the shopping mall to understand how this form of fundraising works, but it is true that outsourced face-to-face fundraising is acknowledged by the Australian charity sector as the most cost-efficient way to obtain large volumes of new donors. What is obvious to those of us running past these tables in the mall is that this work is hard and the turnover is high. Therefore, outsourcing the work is a natural step for charities, however, recent studies are confirming what the dubious have always suspected – that more money is going to commissions to the worker soliciting the donations than the charities themselves. However, this is a contentious issue in itself. We have no problem paying a mortgage broker for his sales, or a dress shop attendant their dues. We understand tipping a wait person is important, so why are we uncomfortable with paying a representative to solicit more money for charity?

The problem is precisely as writers Michael Becker and Ian Warwick reveal. The issue is not the money, it’s the battle of guilt versus merit that wages war inside our bodies every time we have consider spending money on anything. ‘Giving’ money is rarely seen as a gift we give ourselves. Instead we call forth the reverse of guilt we usually feel when we spend, to an expectation the recipient show their guilt. It’s the truth revealed in the great joke about a friend stopping another friend from giving coin to a homeless person. “Don’t do that.” The well-meaning friend states. “They will only spend it on drugs.” To which the friend replies, “But if I keep it, I’m only going to spend it on drugs.” This dilemma is brought to the fore in the clever play How to Change the World and Make Bank doing It. It’s all in the title. How do I save the world from rich assholes, and become a rich asshole while I do it? The play was written out of the direct experience of Michael Becker and Ian Warwick who worked in the shopping malls of L.A. and other areas. Both writers correctly identified the theatricality of those booths and the astonishing tension that imbues the experience. On a simple yet very clever set devised by Bradley Hawkins the all-too-real scenario of the shopping mall conflict is played out, even as the audience walk through the doors to enter the room. Immediately we are plunged into the tension involving our money and what we do with it. 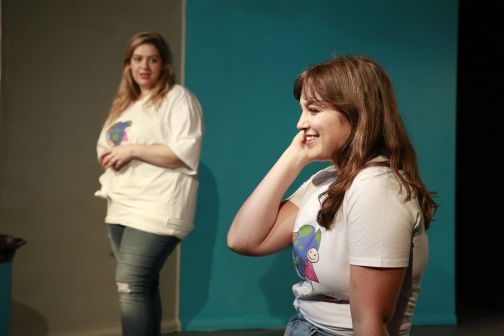 It is true, in white culture at least, that charities exist primarily to appease the guilt wealthier nations intuitively understand is the result of an at cause devastation wrought upon other countries via colonization that is further enhanced by globalization. The arguments are well known and need no embellishment. The writers of How To Change the world and Make Bank Doing It create a complicated but intense power struggle between those performing the job who have a conscience and those who see their work as simply a job, like any other. For Eve (a delightfully funny Barbra Papathanasopoulos) the work cannot be separated from the charity. She wants to appeal to people at their most integrous. Her desire is to genuinely transform humanity and make her rent while she does it. For Chloe (Skye Becker puts in a fantastic performance here) the job is a job like any other. She will use whatever means she can to get people to sign up, because she wants to succeed in her own life. The ultimate irony of How to Change the World and Make Bank Doing it is that Chloe is the superior fundraiser. Eve’s ‘white guilt’ renders her ineffective, while Chloe’s ruthless corporate attitude makes her more successful in the job of soliciting compassion. For good measure, the writers toss in the character of Lucia (a wonderfully identifiable Dominique Purdue) as the aggressive angry leftie who looks down on the frivolous pursuits of those around her. Eventually her social conscience and white rage will come to naught also.

It is in the characterization of these three archetypes that How To Change the World and Make Bank Doing it finds its feet and its great value as a living breathing piece of theatre. It is a brilliant condemnation of the ineffectual left, who can make no real change by their compassion or their rage. Chloe, a character that lacks compassion for the ineffective, is the only winner in the end. We sense that even Marcus (Michael Becker is brilliant in his dead pan role) won’t be able to out wit Chloe. The ineffectiveness of white guilt leaves the realist with all the power.

How to Change the world and Make Bank Doing it is a wonderful piece of indie theatre, and another joyful success for the newly found Limelight on Oxford Theatre space. This is a very funny, cheery production despite the complexity and enormity of its subject matter. It’s a personal joy for me when I see white folk talking about money in the theatre (white people are SO weird about money) and I think it is the most important contemporary subject for white culture to tackle, and of course the one we never speak of effectually. Writers Michael Becker and Ian Warwick have put together a very clever little show that expands on a situation familiar to all of us who go into shopping malls. Bradley Hawkins set is simple yet evocative and Mehran Mortezaei’s lighting is nuanced and well thought out and beautifully reproduced by operator Jacinta Frizelle.

Wearing his hat as a director, Michael Becker pulls great performances for his passion project. His very funny script is in good hands with his three lead women and his collection of shopping centre folk who pass by the tables. Jarryd Dobson is mystifying and very funny as Nico, a most peculiar local worker who befriends the embattled Eve. Susan Jordan and Laneikka Denne are the glue that keeps the play together as a band of disparates who wander into the nets and clutches of those hawking their charity wares. Dashiell Wyndham is gleefully marvelous as two separate children who are targeted for ‘compassion’ speeches intended to motivate parents to give. But the play really belongs to Skye Beker, Dominique Purdue and Barbra Papathanasopoulos. These three women beautifully evoke the world the writers have created and very successfully translate the details of this very strange world to the audience. All three actresses are very funny and exhibit great wit and intellect in their roles.

How to Change the World and make Bank Doing it is one of the smaller productions you will see this year, but its transference from the Fringe stage to the Indie is well paced and well spotted by Limelight on Oxford. It’s one of those productions you will be very happy you saw, particularly for the familiarity and joyful opportunity to laugh at a situation that causes some tension in us at least once a week. It’s well worth catching for a very enjoyable night of theatre.