Posted by lisathatcher on February 12, 2019 in Theatre | Leave a comment

25A Beloir and Acorn Prodctions

Is it necessarily so that the concept of every day life can be defined as a kind of existential illusion? The illusion in which we appear and believe we can grasp what we are in which we can see ourselves from a certain perspective without knowing the reasons and causes without understanding history and ontological truth. Trapped at the center of a kind of false consciousness of permanent bad faith, we try to evade them: in a word it is inauthenticity. Writers like Henri Lefebvre consider the level of the everyday not to be a false consciousness or permanent bad faith.

The question of how we live does not stem from ignorance, and moreover the problem cannot be resolved by knowledge, nor by language nor by logos alone. “There is a kind of membrane between the individual and society. It is in this state the individual confines himself to banalities, to the accepted norms of trivial communication and behavior.” For Henri Lefebvre society exists in layers; first the buffer between the world and the individual formed by banalities, second the rupture of discomfort when one declares “What a life! Why do I put up with this?” and third sphere of non-adaption, of vague rejections and unrecognized voids, of hesitations and misunderstandings. It is in this sphere we understand the situational drama of the individual.

In Tuesday, the four characters inhabit a world that traverses all three of these states as they move through a Supermarket. Writer Louris van de Geer takes a traditional Marxist perspective, preferring to view individuals as a collective mummified unexpressed series of respondents. However, the more modern perspective of the multilayered individuals as expressed by sociologists such as Henri Lefebvre equally fits Louris van de Geer’s perspective just as well – a testament to the fine writing. It’s more interesting to think of the inhabitants of the Supermarket as intentionally placing a membrane against the abys – if for no other reason than to avoid supercilious superiority. Surely, we are all victims of the supermarket. Surely, we have all made the observation about children crying out. What makes Louris van de Geer’s point so potent is not her distance from her aisle strolling characters, but her lucid observation about the unaccounted-for eruption that can occur.

Tuesday is a beautiful production. Gripping despite the depiction of suburban banality, it is beautifully written and directed with a deft and warm hand by Nell Ranney. If the writer does not particularly love her characters, the director injects a missing warmth that flows through to the audience. Performances are intimate and personal, and the downstairs space at Belvoir makes for the perfect stage size to enhance the intimacy Nell Ranney seeks to evoke. A stand out of this particular production is the design by Isabel Hudson and the sound design of Clare Hennessy. Each work together to evoke a surreal and senses heightened experience that calls forth both the anxiety and the drive for (superior) distance from the other the supermarket calls forth. Powerfully wrought lighting design by Martin Kinnane completes the picture and drives the sense of warmth combined with alienation so evident in every supermarket. 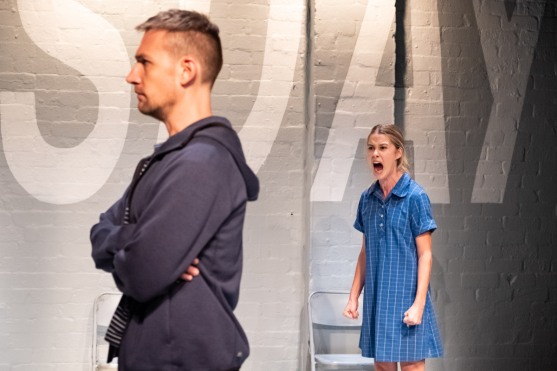 An expertly chosen and directed cast gives this production of Tuesday a particular edge in its ability to convey the multiplicity of voices its writer seeks to provide. Frances Duca is sent-from-heaven divine as the housewife staring into the spill as if it were the universe at her feet. Bridie McKim is superb as the young girl engaged with her dislocation and nonsense making in the supermarket. Duncan Fellows provides (at times) much needed comic relief and is entirely convincing as the put-upon store manager. The performances are wrapped up and brought to their intense conclusion by a great performance from Tom Anson Mesker who lives up to his complicated character with finesse, giving him much needed sympathy for a monster.

This production of Tuesday in the downstairs theatre at Belvoir is a powerhouse presentation forming a comprehensive segue from the success of 25a 2018 to a promising 2019. It’s an exciting take on alienation and the complexity of modern living. A must-see ride that will thrill every second of the way.