Fiddler on the Roof

Fiddler on the Roof is a disarmingly difficult musical to get right. Like the play itself, it has to be the perfect mix of tradition and contemporary flare that creates the right context for a production’s individuality. Seemingly simple, the musical has enjoyed reprises as diverse as Broadway to the local High School since it first opened in 1964. Essential to its enduring quality is the musical’s ability to adapt phenomenologically to a community. While it’s essence (traditions) remain true, like the culture it represents, modern imprints make themselves seen while the musical itself embodies the complex tension it represents. A ‘perfect’ representation of Fiddler on the Roof is a combination of the production’s immersion in a community and the right adherence to certain production values. The dance and song of Fiddler on the Roof can’t engage too much polish or it risks corrupting the vibrating soul of the musical’s authentic charm. Equally great pride, skill and energetic display are essential to connect deeply with an audience. In this way, Fiddler on the Roof is unique among musicals, as it very properly represents the complexity of the culture it chooses to put on display.

It is for this reason this current production of Fiddler on the Roof is one of the best you are likely to see on a Sydney stage. Part of the Moriah College’s seventy fifth anniversary celebrations, the powerhouse strength of the production lies in the flawless balance between ‘authentic’ and ‘professional’ essential to any worthy rendition. Almost nothing beats flawless production values but they are always bested by the exuberant energy of individuals performing at their very best. Director Roberta Goot has an intimate understanding of this positing of humanity against excellence, and successfully calls forth a passion in her cast and creatives that moves far beyond the burdensome perfections evoked by strident professionalism. Art is nothing if it is not properly representative and when Moriah College decides to do Fiddler on the Roof, you have the proper makings of great art. Place that opportunity in the hands of an artist like Roberta Goot, and that rare, unrepeatable magic happens.

For this Gen X, middle class WASP-girl and her partner the night was one to remember. A rare opportunity to experience contemporary Jewish culture from the inside, we felt the joyful exuberance of an intimate united community having a ‘Me’ moment. Fiddler on the Roof was not only an axis point on a wheel of connectivity and joy for those around us, it was a familiar and warm invitation to my partner and myself to see what this famous musical meant to those for whom it spoke. Fiddler on the Roof is marvelous for its superb musical numbers that exude a timelessness, but to see it reflected on the face of a large, strong Sydney Jewish community was another thing altogether. This comes back to the talent and downright cleverness of Roberta Goot and her enormously high standards. Sure there were missed notes and the occasional forgotten line, but who cares when an auditorium of hundreds is clapping joyfully and clasping hands at their grandmothers performance? Therein lies the true power and passion of this musical.

Of course, what makes such a connection possible is enormously high standards in production values. A combination of professionals such as Benjamin Brockman (whose superb lighting imprint is all over this production) Simon Greer (with his remarkable history in set design) and support like stage manager Ned Matthews, production manager Danny Lander and rehearsal pianist Shirly Frumar, Roberta Groot and producer Tara Ende build each performance on the shoulders of professionals familiar with amateurs and students. Overwhelmingly evident is Roberta Groot’s desire to call forth high standards on behalf of tradition, culture and passion for performance and all the transformative power that goes with those standards. The very glossy program is filled with beautiful stories of families and Moriah alumni performing together as a cohesive unit. In a cast of over one hundred and fifty that is no small thing. It genuinely seems that being in this production of Fiddler on the Roof is as marvelous as watching it, and an action that will forge bonds inside this community for decades to come.

This is an excellent opportunity for those of us outside this vibrant society to experience their culture, their familial love and the great respect for tradition and history the musical represents. There will inevitably be many opportunities to see Fiddler on the Roof in a lifetime, but very few so deeply inside the community the musical celebrates. This production lives up to such a promise and is a marvelous night of theatre for anyone who loves this musical. 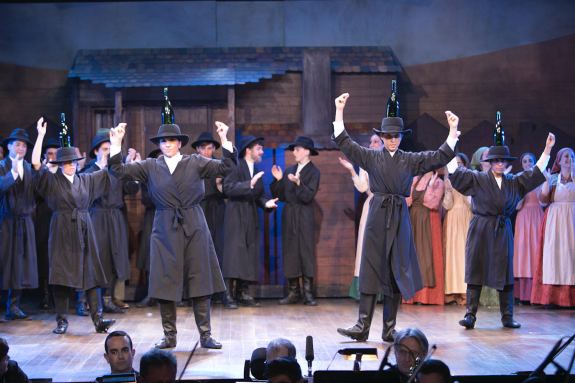