Carrie: The Musical – Fresh perspective as the lifeblood of theatre. (Theatre Review)

Posted by lisathatcher on August 1, 2018 in Theatre | Leave a comment 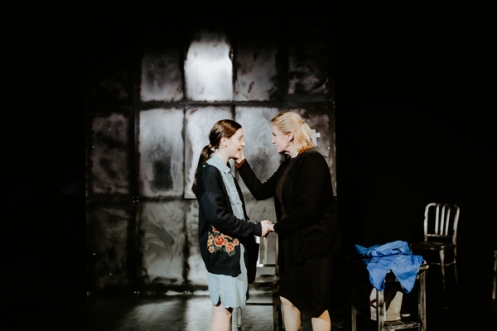 For Louis Ellis Productions, this production of Carrie:The Musical is primarily about bullying, and as director Hayden Tonazzi states in his Program notes, the ‘cost of being yourself.’ Carrie the outsider, Carrie the Other is preferanced over Carrie the teenager first encountering female power. Bullying, both cyber and real life, is more of an issue for teenagers and young adults than it ever was before. This production plays down the horrific in Carrie favouring character analysis and a certain kind of naturalisation that has each audience member see themselves in one or many of the characters on the stage. For Steven King[1] Carrie was always about the advent of female power and the destruction it had the potential to wield upon society and culture; but particularly upon his own group: privileged white males. One could easily argue that it took Brian De Palma’s 1976 (made two years after the book was written) film to rescue the book from all that insight, by using the opening scene to re establish the male gaze as the dominant force regarding all things feminine. Thus the film establishes the legend, and Carrie becomes more about horror than it does about Carrie. Much of this is redressed in the 2013 film, particularly director Kimberly Pierce’s display of menstrual blood as thick and heavy, rather than the castration presumption Brian De Palma pushed.[2] But still, until you see Carrie: The Musical, Carrie the character tends to be lost.

And so now we come to the insightful representations theatre is provoking, which are quite a wide birth from the campy film ideas. Under Hayden Tonazzi’s direction, character analysis takes centre stage. Carrie (Kirralee Elliott with her beautiful voice) is a genuine misfit who looks remarkably like the child we all knew in school burdened to represent parents engaged in small protestant off shoot religions such as Jehovah’s Witness or Seventh Day Adventist. Margaret White (Michele Lansdown who is spot on here) is a terrified protector with the fear of god in her, genuinely worried about what the world will do to her little girl. A strong camaraderie exists between mother and daughter, one that is not missing love. Abraham and Isaac are evoked in the murderous scene at the end, and anyone who understands Protestant Christianity knows this is a complex theism at work.

With the exception of Chris (a fabulous Rachel Tunaley) all the students are depicted as trying to fit in, becoming bullies back and forth in the process. Boys are similar playing down the sociopathic tendencies of Billy Nolan (Zach Selmes) to make him a rather nasty but typical high school student. Chris is regularly presented by Tonazzi  as standing alone in her aggression toward Carrie with Rachel Tunaley giving her an over the top loathing that fuels Stephen King’s original fear about women and power. Posited against the kindly Sue (Lauren Anne Paul) and the practical Miss Gardner (Heather Campbell) the triumvirate of female power is properly manifest less as choices (and therefore warnings of poor behaviour) and more as ‘natural’ consequences of giving women a voice. Giving women power is not an assurance of good behaviour. It should happen because taking it off any human is reprehensible. With fabulous numbers such as the opener ‘In,’ Louis Ellis Productions successfully recreate the energy, fear and joy of the school halls without the campy nod to the earlier films.

Over the years, Carrie is developing and changing in the way we look at its narrative. While the original premise that included the horrors of bullying and chaos theory remain in tact, additional observations such as the horrific feminine, fear of piety and zealotry and the unavoidability of human cruelty have established themselves as readings of the original. The stage musical has gone a long way to re writing the authority of the original film – a job that did need and continues to need to be done. Carrie, after all is not just Brian de Palma’s story.  It’s Stephen Kings, Kimberly Peirce’s, Sissy Spacec’s,  Chloë Grace Moretz’, Hayden Tonazzi’s, Kirralee Elliott’s, yours and mine. This adaptation of the Stephen King novel will not be the same as the films, but neither will it stray from the story for you. Instead it is a recognisable telling of a story we all know so well, in a new voice that highlights important aspects of the story previously veiled. Most of all, it’s a great success and wonderful fun. Take friends and chat later. You will want to!

[1] “Carrie is largely about how women find their own channels of power, but also what men fear about women and women’s sexuality. Writing the book in 1973 and only three years out of college, I was fully aware of what Women’s Liberation implied for me and others of my sex. Carrie is woman feeling her powers for the first time and, like Samson, pulling down the temple on everyone in sight at the end of the book.”

[2] As much as I love the first film, Carrie’s first period did look like she had her penis removed

← Mum, Me and the IED – Lisa chats with James Balian and Roger Vickery. (Theatre Interview) Moby Dick – The changing face of the White Whale. (Theatre Review) →