Home » Theatre » Dresden – The disease in the search for meaning. (Theatre Review)

Dresden – The disease in the search for meaning. (Theatre Review)

For Nietzsche, the problems he faced inside his friendship with Richard Wagner (articulated in his book ‘The Case of Wagner’) were extended to become emblematic of a broader problem of nihilism which Nietzsche saw specifically as ‘European Nihilism.’ This problem became exemplified in Wagner’s anti-Semitism and eventual turning to Christianity. For Nietzsche, Wagner’s music became so polluted with European nihilism even his earlier works were tainted with what emerged in the later work. Nietzsche warned of a Europe so tainted with racism and nationalism as a response to nihilism that he wrote a variety of urgent pleas for what he called the ‘good European’ to emerge, whose primary devotion was to leadership and upholding the joie de vivre of two millennia of the European spirit. His fear was that the antisemitism that was able to grab his friend, distort his music and drive him to Christianity might find a foothold (or perhaps a mouthpiece) in the broader European community.

In Nietzsche’s view it was ‘passive’ and pessimistic nihilism that was most likely to prevail in Europe following ‘the death of god.’ That is a symptom of decline, a weary exhausted will which has searched in vain to locate the highest values: aim, unity, Being. Having grown dissatisfied with the unsuccessful search for these highest values, the passive nihilist not only devalues these beliefs but goes on to devalue the world as well under the misconception that the world ought to have manifest these values. The greatest danger with the passive form of complete nihilism is that it might lead to a severe “decline and recession of the power of the spirit” marked by Hamlet-like inaction. In ‘Beyond Good and Evil,’ Nietzsche noted how the ‘death of god’ in Europe might lead to “the worship of the stone, stupidity, gravity, fate, the Nothing… All of us already know something of this.”

It is this link that ties a great artist like Richard Wagner with a man like Adolf Hitler. Nihilism was in Wagner’s music, as it was in so much European art. Surely Nietzsche’s fear of the inactive worshipping stupidity can be seen in Germany’s support of Adolf Hitler. It is why so many of us sense of connection between those days and the present. This pessimistic response to life is likely to persist because of Europe’s Christian-Platonic heritage which had accustomed European culture to positing a deeper meaning underlying all events. It is precisely by virtue of having previously judged existence on the Christian standard which modern Europeans inherit that modern European culture is interpreted as being meaningless and that the experience of nihilism emerges. As Cornel West said, “Nihilism is a disease of the soul. It can never be completely cured, and there is always the possibility of relapse. There is always a chance for conversion–a chance for people to believe that there is hope for the future and a meaning to struggle. …Nihilism is not overcome by arguments or analyses; it is tamed by love and care. Any disease of the soul must be conquered by a turning of one’s soul. This turning is done through one’s own affirmation of one’s worth–an affirmation fueled by the concern of others. A love ethic must be at the centre of a politics of conversion. A love ethic has nothing to do with sentimental feelings or tribal connections. Rather it is a last attempt at generating a sense of agency among a downtrodden people.”

Inside Dresden then, Justin Fleming examines the relationship between culture and its ability to forge action. Justin Fleming illuminates the possibility that the origins of European experience of meaninglessness or nihilism are not found primarily in the organisation of society or the economic and political structures which govern it, but in self-understanding. It is an error to consider various forms of social distress (physiological degeneration, corruption, poverty etc.) as the causes of nihilism, for they are symptoms. Justin Fleming’s Wagner (Jeremy Waters) attempts to claim distance from Hitler’s (Yalin Ozucelik) actions in a plea for such causes, but he cannot escape the connections to the man he forged inside his music when he refused to self-examine. Indeed, Justin Fleming has the floating presence of Cosima (Renee Lim) painted as a muse groomed to impart important words of wisdom that both Richard and Adolf would do well to heed but misinterpret due to lack of proper self-examination. Wager took his ultimate journey toward god, and the journey of Hitler is well documented. In the ashes of Dresden, each man faces a decaying Europe and attempts to make the other accountable for the weary path Europe trod. Nietzsche said “The philosophical nihilist is convinced that all that happens is meaningless and in vain; and that there ought not to be anything meaningless and in vain.” Justin Fleming, with his beautiful lyricism, offers us two striving men who imagine themselves at the forefront of an intellectual experiment only to have it reduced to a Christian-Platonic quest for meaning that they had no business desiring in the first place. In the play’s program he writes: “And why does what happened in Dresden long ago reach us in Sydney today?” 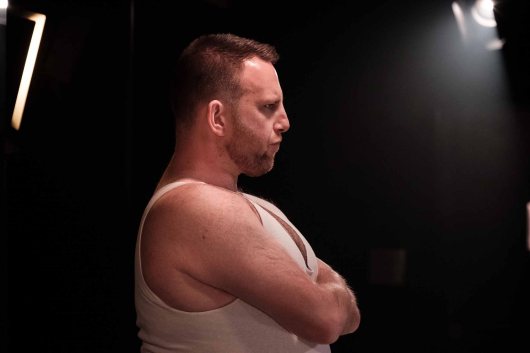 Dresden is a magnificent play, beautifully written by Justin Fleming and elegantly directed by Suzanne Millar. Suzanne Millar calls forth wonderful performances by her cast, each fulfilling the playwrights vision with an enormity that never loses its power of intimacy in the exciting Kings Cross Theatre. Dresden marks ten years of bAKEHOUSE theatre and celebrates a long relationship between theatre company and this writer, a collaborative history that shows in the quality of this production. The performances of Yalin Ozucelik, Jeremy Waters and Thomas Campbell are particularly thrilling, but powerhouse of the production equally resides in the collaborative strengths of every creative at their best. Patrick Howe has made a versatile and interesting set for the actors that Ben Brockman enhances with the evocative power of his lighting, bringing a small cast to life with multiple performances well delineated.

Dresden is yet another excellent production on the Sydney independent stages in 2018. Justin Fleming is right when he claims something in this story resonates with the world around us today. Nihilism leads to a variety of fanaticisms and mostly laughs at any attempts to destabilase traditional access to life and meaning. Culture that holds a mirror to our societies and does not live purely for entertainment is the transfusion that gives us life blood. This principle is embodied in Dresden, currently showing at the Kings Cross Theatre.