Home » Theatre » Buyer and Cellar – the superficial wrestles the real in the ego state. (Theatre Review) 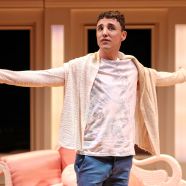 Buyer and Cellar – the superficial wrestles the real in the ego state. (Theatre Review)

Posted by lisathatcher on October 12, 2017 in Theatre | Leave a comment

6 October – 12 November. You can grab your tickets here.

When Jonathan Tolins places Alex More at the bottom of the stairs in Barbra Streisand’s basement, a complex situation comedy occurs between a gay man and his alter ego – the representational Diva. Alex reminds us, repeatedly, comically, that this show is not a true story, that is a fictionalized account of meeting Barbra Streisand. Barbra it turns out, is not his secret Diva, neither is she ours (though she may be, just as she may be Jonathan Tolins’) but she is Alex’s partners’. This basement becomes the seat of the unconscious, or a sublimated ego state for control of the Id by a healthy ego. The basement is Barbra Streisand’s concession to fame – fame excludes her from civic space, and therefore she creates a mall to practice something she used to love now precluded through fame; Shopping. For Alex the basement is a job, but it is equally a battle ground of superficiality, a direct and violent confront with the one-dimensional aspect of gay culture tied up in clothing, image and that disturbing ‘gay-ness’ affect that calls forth the ludicrous question of ‘authenticity’ when compared to a higher Moral Authority (a heteronormative Big Other) such as god or nature.

However, the basement equally calls forth feelings in Alex’s partner, Barry (also absent from The Real of the stage) who has to deal with the jealousy he feels as his partner gets closer, not to a rival lover, but a deeper connection with ‘gay-ness’ and therefore superficiality. Ultimately the event causes Alex and his partner to re-assess their love affair, searching for a ground of being in their connection, separate from stereotyped tropes of heteronormative commitment. These three titan ego states wage a war masked by superficiality in the controlled Id space of Barbra Streisand that we absolutely know isn’t real or true, yet absolutely is because we have seen it in her book and on the stage.

What occurs then, when Alex stands at the bottom of the stairs and Barbra appears, descending one step at a time, her presence manifest via Alex Berlage’s spotlight as if she were Gay-God rather than Rich-Chick, is an Event. Alex’s life is normally grounded on a void of inconsistent multiplicity, which is at once both void and excess. This is usually covered up by the dominant ideology and the state-of-the-situation and the process by which we go about being ‘normal.’ An Event happens when the excluded part appears on the scene, suddenly and drastically. This ruptures the appearance of normality and open a space to rethink reality from the position of its real basis in the inconsistent multiplicity. Barbra appears as real – when in ‘normal’ life she absolutely must not. Her role as gay icon is contingent upon her absence in The Real. Her real cannot be controlled, therefore it is excluded in order to make her ‘normal.’

When she surfaces, or descends, she has no recognizable identity or attributes within the situation. The Event therefore is not based on some particular attribute. Barbra can only descend into the basis of her generic humanity, the Id she tries to mask from the world. The only recourse for Alex is revolt, and this takes place in the space of his relationship. What makes Jonathan Tolins’ work so clever, is Barbra is still unreal to us, just as she is to Barry. Only Alex and Barbra are having The Event, and neither of them are actually having it. Here in lies the magic of theatre to both present and un-present life, and life changing events. This is why we can see a thing played out meticulously before us, but not feel it as an experience. Our question becomes, how do we have an Event touch us? Alex’s decision to superficially change his rug at the end is in response to his autonomy as an individual. We are left then, with the very interesting problem of a superficial event (theatre) presenting superficiality, reconciling it on the body of a relationship (performed on the body of Ben Gerrard) transforming the protagonist who is unreal (actor) and asking a witness (audience) to be transformed by The Event (play) that is equally superficial and real at the same time.

It is all too easy to dismiss Buyer and Cellar as a superficial experience of gay culture, because surely Jonathan Tolin’s point is precisely that superficiality is masking a real that matches the superficiality we all use. ‘Gay-ness’ as affect is repeatedly referenced as ‘effort’ while it is equally so, that heteronormativity is affect (superficial, headed up by straight icons who are not allowed to be real – think of Hugh Heffner) and the same effort (and money) goes into justifying them according to the Big Other’s of social norms (god and nature) as goes into refuting homosexuality on those terms. The superficial is real, in that it is the protective covering that allows us to function, protecting us from the void of inconsistent multiplicities. It is not exclusively the domain of Gay, or other LGBTQI cultures.

Buyer and Cellar is a wonderful night out, with lots of laughs and cleverness to keep theatre devotees enthralled. Ben Gerrard does a magnificent job making a very camp story accessible and carries the narrative with barely a dip in the fun and tension. Susanna Dowling has engineered a story that never tarnishes, and remains true to the very funny writing such that the audience remain focused and generously leaning in it all the way through. The subject of superficiality is handled well by all the creatives involved, from the sumptuous design of Charles Davis, the on-que chic of Alex Berlage’s lights and Marty Jamison’s sound to the clever simplicity of Renata Beslik’s costume. The work however of Ben Gerrard stands out as the corner stone of a great text realized by great creatives. He carries the show on his shoulders effortlessly (or so it seems) and invites us into this very odd world with confidence and warmth. Buyer and Cellar is a wonderful night that needs to be tacked onto a group, a meal and a very pink cocktail after. Go, and have a great night with friends.