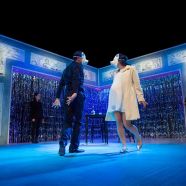 Posted by lisathatcher on October 3, 2017 in Theatre | Leave a comment

278 Septyember to 7 October. You can grab your tickets here.

A key phrase in The Winter’s Tale emerges when Leontes states “All’s true that is mistrusted.” This then forms the basis of themes for The Winter’s Tale, written at a time when Skepticism was emerging as a rival to Fideism. Skepticism is accompanied by a presumption of grounded-ness in the senses which even the tyrant cannot imagine to be deluded. It is here that Leontes synchs up with that other great character of cynicism and mistrust, Autolycus who mocks the “fool Honesty… and Trust his sworn brother, a very simple gentleman.” Shakespeare takes great pains in The Winter’s Tale to separate mistrust from Prudence, considering it a virtue along with Temperance, Justice and Courage. These are virtues that Shakespeare sees as diminishing in the contemporary political climate that gave birth to the Reformation in England. For Shakespeare, slander against Hermione (possibly a Katherine of Aragon type figure) fans the flames of religious conflict, but even more than this, we have the usage and misuse of language resulting n conflicting theories emerging from the interpretation of varying dogmas of the day. Shakespeare was always concerned with the practical and political consequences of opposing theories of language, and in The Winter’s Tale he extends this into the taking and swearing of oaths.

It is in this context, that Sean O’Riordan’s interpretation of The Winter’s Tale and its emphasis on clarity of language, emerges as one of the best adaptations of Shakespeare I have seen in my time as a reviewer. Particularly via the actor Charles Upton, who plays Leontes, with a contemporary clarity that still honours its period. All his speeches come alive, but particularly the spoken passage famous for its obscurity, where he cries out against mistrust which leads him to another version of affection, which includes pain that “stabs the centre.” When Leontes cries “Affection! Thy intention stabs the centre” meaning becomes clear when immersed in the context of the day, which assumed a certain process involved in ‘vision.’ Intention is the pointed weapon toward the object perceived, and when coupled with memory and attention, reveals a will distorted by obsession with the beholden image. When Charles Upton speaks, he includes this phenomenological account of human perception by showing how the senses can’t tell if a thing is real or unreal. Leontes is uttering a faulty perception that observation can be completed without the virtues encouraged by God – prudence, temperance and courage. Sean O’Riordan further enhances this confrontation in his audience by having Hermione (Grace Naoum – who is sublime in this production) and Polixenes (Alex Ebert) truly appear to be flirting. We, the audience, experience the intense irrationalism that is Shakespeare’s point when we see them ourselves. Where does Leontes jealousy come from? It comes from a lack of exercising certain essential virtues, says Shakespeare, and only relying on his rationality; man places confidence in his sensory perception to his peril.

Leontes extends his mistrust to the word of ‘god’ as grounds for his jealousy. It is not until the death of Mamillius that he is able to question his blind arrogance. “I need no more than what I know.” It is after this, that he can claim “I have too much believed my own suspicion.” Themes extend into David Hume’s mitigated scepticism territory here, even when they were tapping into central questions concerning both Protestants and Catholics at the time of writing; the tragedy of sceptical mistrust against a eulogy for the transcendent power of grace and faith. And indeed, is this not precisely what jealousy is? A distortion of perception based in fear and memory that interferes with the wielding of external virtues such as trust, courage, temperance and prudence?

However, this depth, immediately obvious in this excellent Sean O’Riordan production, is not the only emerging thrill the audience can enjoy. Coupled with an extraordinary clarity (really, this can’t be overstated. As an Australian, I have seen and read so much Shakespeare, but rarely has so much of the beauty of it come alive for me as in this production) and placed on a versatile, beautiful set by Isabel Hudson that included interesting and evocative costumes, the entire production moves through the lengthy material much faster than I am used to for Shakespeare. Performances were fine, with stand outs (besides the two exceptional leads) in Laura Djanegara as Camillo, Dave Kirkham as the Shepherd and Roger Smith as Antigonus. But there were so many fine moments from the cast, including Emma Wright as Time and a particular mid show dance number that had me in stitches. It still seems a little ungenerous to single out cast members, as everyone contributed to Sean O’Riordan’s vision with confidence and skill. This production of The Winter’s Tale looks like a joy to be a part of, and brings Shakespeare alive for the audience in a way that we rarely see in these days. It’s a great evening at the theatre.