Posted by lisathatcher on September 11, 2017 in Theatre | Leave a comment 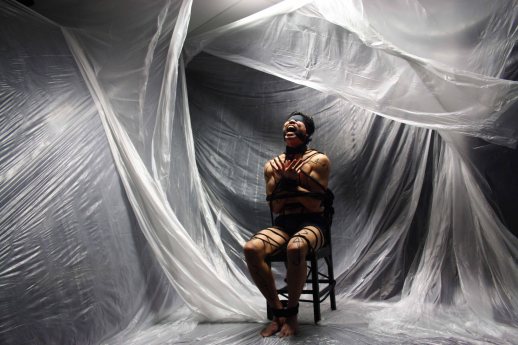 6-30 September. You can grab your tickets here.

There are many exciting things to do at The Sydney Fringe Festival this year, but surely one of the most thrilling is the immersive theatre experience by Mongrel Mouth on the second floor of the exciting new Hub in Alexandria. Here, Mongrel Mouth expose us (the audience) to the borderless possibilities of the infinite when it comes to theatre. For Mongrel Mouth, nothing is ‘interesting’ unless it is affirmative; theatre is in danger of being colonized by the fetishists of ‘entertainment’ and the cult of passivity. Immersion theater affirms action, the present and equally the infinite. It is the very embodiment of possibility. Text is only of value when it is caught up in its multiform correlation with the integrality of affirmative experience and carries no constituent linguistic power. In Undertaking, Mongrel Mouth invites us to ‘be’ in a room, alone surrounded by others, with narrative removed rather than replaced. Here we must abandon the old idea that the natural form of thought is judgment. Above all, do not judge, and replace judgement with personal experience, with becoming caught up in our milieu.

As Giles Deluze would argue, the dialectic is exhausted and we must rise up against the negative. Theatre is more than an opportunity to preach. Instead we can search for the intrinsic assertion of the unlikely and doing so ascetically. It therefore follows that we need to trust processes in as much as they lead to beginnings. Divest ourselves of the negative for it is a tired and pointless milieu. Undertaking, despite its dark themes, believes as a living breathing entity in the power of human connection to The Event, and its transformative consequences. Mongrel Mouth do not offer the instructive immersion theatre popular in the 60’s disguised as exhortation. Rather this theater is solitary, individual and responsive. Whose life will you save? A character’s in a play or your own? 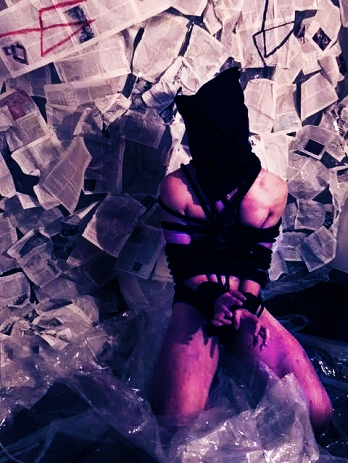 Mongrel Mouth are (in)famous for their interactive pieces. A little like a cross between a psychological thriller and a cypher room, Undertaking’s only real catch is that it is doomed to be the play you make it. Atmospherically it works a treat, with David Herrero’s music and Gemma O’Nions set design giving a fully immersive experience. Performances by Rizcel Gagawanan, Jasper Garner Gore, Benjamin Wang, Moreblessing Maturure and Sharon Zeeman are convincing and striking despite the absence of a true stage. All the ingredients are there for a thrilling theatrical event, but passivity must be eschewed at the door as nothing happens “to” but “around” with intuitive feeling as your best guide. Here non-meaning is the cause of meaning and all things bow to the affirming nature of the appeal to freedom. Theatre is, literally, what you make it.

Undertaking is a marvelous, beautiful production, if you are willing to let it be one. To get yourself there and then get over yourself will give you the best opportunity for Deluze’s rising up against the negative. Grant yourself an Event born of Experience instead.

Businessman with fingers crossed behind his back.