Dreamgirls – Finding its place on the amateur stage. (Theatre Review)

Posted by lisathatcher on September 10, 2017 in Theatre | Leave a comment

September 8-17, You can grab your tickets here.

One of the more interesting aspects of Dreamgirls is time. In this production directed by Rod Herbert, something lost in the glamour of the film comes to the fore, and we watch as careers, music and histories battle for room on the stage of life. Time is the foundation upon which music launches anyway, but here time is deeper than structure beneath beautiful sound. Here the motifs of unity, gatherings, harmonies, ‘consensus’ and shared values are nothing more than thought’s tiresome moment of fatigue. Everything moves fast for Effie, Deena and Lorrell; as it equally does for Curtis, Jimmy and Clarence. What does have value is certainly synthetic, as is all creativity, but in the form of separation, disjunction. Disjunctive synthesis: that is the real operation of anyone who is ‘forced’ to think (for we do not think ‘freely,’ we think under pressure, we think as ‘spiritual automata.’) The speed at which life for The Dreams is played out naturally excludes ‘thought’ but isn’t that exactly how we live today? 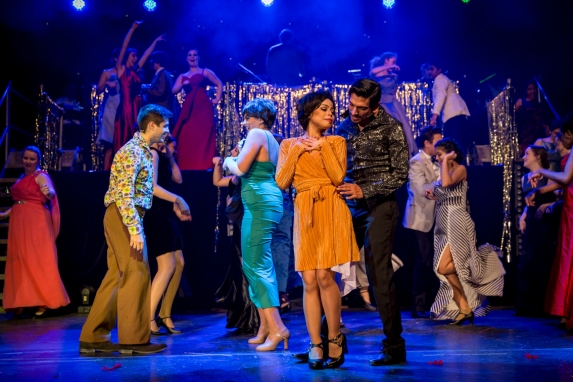 It is always (every time – no exception) better to see a play (be it musical, farce or drama) performed than ‘transposed’ to the screen. We love the film, but surely that is more the mind-numbing beauty of Beyoncé or the dazzling charisma of Eddie Murphy. To see Dreamgirls on stage is to immerse into Tom Eyen’s point – that product can’t replace substance. And to see Dreamgirls performed by an amateur theatre company is to further immerse into his point. The ethic of Dreamgirls is compromised by a distracting polish. We are being encouraged to celebrate the moment, the joyful ephemeral bliss of live performance. Time is of the essence, Tom Eyen seems to say – live every second as deeply as we can. This is supported by Rod Herberts direction which focusses on pace but pauses to breathe deeply in the musical numbers. It’s as if Dreamgirls can’t be properly fulfilled unless it is performed on the amateur stage and reaches its zenith in that environment. 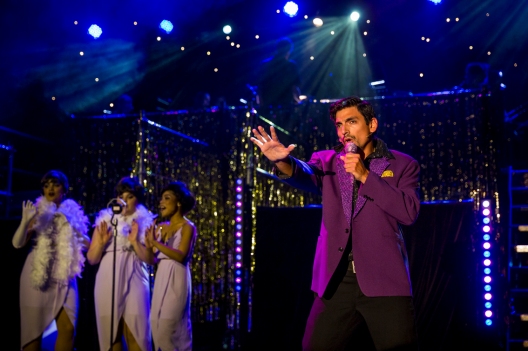 To further enhance the experience, Rod Herbert has assembled a fine collection of talented creatives to fulfil his vision for the show. Opening night presented a couple of sound issues (Important songs engulfed by the band leaving talented voices swallowed) but there is no reason to suppose these won’t be ironed out with all subsequent performances. Joseph Nalty’s choreography is a standout, keeping the very large ensemble engaged and synergized. Anthony Cutrupi and Steve Fleri properly fulfil on the promise of all those gorgeous songs we know and love.

But nothing can take away from the three women at the centre of the Dreamgirls story and the fact that this is their night. Jade Montalvo, Sasha-Lee Saunders and Kaleigh Wilkie-Smith are all strong in their roles, on point with singing, movement and acting. They are supported by great performances (including Liv Wassef and Claudio Acosta who have enormous fun that is completely infectious) but in the end if Dreamgirls doesn’t have strong leads who can live up to all the expectation placed upon the roles by the film, you don’t have a great experience of the play. The three women take this on easily and professionally and are a joy to watch. Kaleigh Wilke-Smith is defiantly relaxed on the stage, and places the audience at ease in our confidence of the abilities on display. A brief word about the ensemble – They were a tightly packed bunch, disciplined and supportive. Often the true sign of an excellent production, a strong group behind who move well and sing together is a powerful experience for an audience, and Dreamgirls embodies this difficult to achieve cohesiveness.

It was a genuine joy to make my way out to the Rockdale Town Hall to catch this current production of Dreamgirls. If you live in the area (and even if you don’t) get yourself there to see it on a NSW amateur stage for the first time. The night I was there the audience was alive with buzz, reacting strongly to the upbeat happiness in the room. It’s a fun, entertaining night that will made you happy to venture out on a beautiful Sydney spring evening.