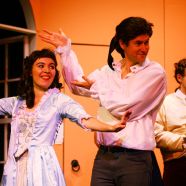 Posted by lisathatcher on September 5, 2017 in Theatre | Leave a comment

You can grab your tickets at the Gensian here.

Or through Tickets Tonight here.

In the program to Figaro, a note penned by director Shane Bates argues the case for a 2017 revival of Figaro since in the last two hundred and forty years very little has changed in the world politically. The rich are getting richer and sanitised by the sheen of capitalism, the poor are in no better situation under democracy than they were living under Ancien Regime and Feudalism. In a perverse twist supporting Shane Bates argument, the droit du seigneur (right to the first night) Figaro outsmarts using his wits, feels remarkably similar to the ludicrous Australian plebiscite on gay marriage, as same sex couples are forced by law to seek out ways they can outwit the legal boundaries to their unions. Just as feudal lords had the right to sleep with virgins before their wedding night, so we live in a world where straight people tell gay people how they can love and make love. Surely the case can then be made that a political revolution (in the case of Pierre Beaumarchais The French Revolution) can’t change the lot of the poor and powerless? Perhaps a post Enlightenment revolution that genuinely makes a difference, will not start at the political level. After all, which revolution genuinely changed the lot of the poor or those whose disenfranchisement was played out on their bodies and sexual practices? As a female, I have yet to witness this revolt.

And so we are pleased and horrified to find this current adaptation of Figaro at The Genesian is remarkably contemporary, all the more for the recognition that the sexual is the political. If systems were held in place in the past with threat of violence, then surely poverty is that same violence in another form? Control is always played out in the sexual realm. Ask yourself why the Church is pre-occupied with sexual morality rather than, say financial morality or ecological. The battleground for our own bodies may have been reduced these days to terms such as “identity politics” or “political correctness” but at their core, they address the physical manifestation of an unequal distribution of power. It is the battle for sexual freedom Figaro fights for, the battle to take whom he loves to his bed without the interference of a self-appointed powerful who desire to take that away. Figaro is motivated to act because the superiority of the rich has been demystified for him through proximity. Figaro discovers in the Barber of Saville (Beaumarchais play before The Marriage of Figaro) that the rich are so through luck and not talent, but is forced to interact with a system that thwarts him. So it is today. We presume wealthy men are so because of talents, when in fact intelligence and money together is entirely a matter of chance. To presume a rich man has accessed wealth through skill or wit is to be the sort of sucker who would vote for Donald Trump. This point, so well made by Beaumarchais as to have his plays banned, is Shane Bates’ point today. Interestingly, it is no less subversive today.

If there lies a difference between modern life and Beaumarchais life of Figaro it is in the indifferent power of the post-revolutionary collapse of psychic space that we numb with society-as-anesthetic; Social Media, advertising, desire for things as symbols of a way to be. If the Church used to be the opiate of the people, surely today it is our desire for things. Ultimately seeking satisfaction in our current society (that is playing by the rules) alienates the subject from herself. Any way we interact with the desire to “get ahead” results in the same loss of self, required to convince ourselves we are progressing. Figaro lived with this pain, but spent his spare time scheming for way to upend the system. Today, we are too exhausted, or numb to perform such mental gymnastics. Power has married subterfuge and we are complicit in the production of that which will subdue us.

For this reason, Shane Bates could see a revival of Figaro would speak to us of revolution, but more interestingly it equally speaks to us of our own numbness, for it is as damning of power today, but we feel none of the outrage. Somehow the parallels are lost on us, just as arts other inspiration is lost on us. That is not to say there are no pleasures to be had in this charming and clever interpretation of Charles Morey’s adaptation, rather that it doesn’t hit as hard as it possibly should. Shane Bates has assembled a marvelous cast, who are having a lot of fun with the production. Yasmin Arkinstall as Suzanne and Paul Murton as the Count particularly appear to be having a wonderful time as they relax joyfully into their roles. Ted Crosby is a light, witty Figaro who floats through his role with ease. This is remarkable given some of the word play he must convey, but he does so with a clarity not sacrificed to pace, which means none of the witticisms or intellect behind the play is lost. These three leads are well supported by a cheery cast each delighting in the boisterous romp of the play. Figaro is a long play, with a great deal of convoluted carry-on, and it is to Shane Bates’ credit that the audience never gets lost nor does the time drag.

If we are a little lost to the revolutionary power of art today, we are not lost to the point that little has changed. Figaro as adapted by Charles Morey and directed by Shane Bates is a fast paced, hilarious delectation to be sure but perhaps its greatest pleasure comes from identifying with Figaro and Suzanne and imagining ourselves outwitting the rich and powerful.