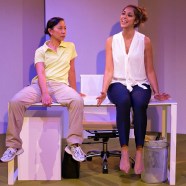 Posted by lisathatcher on August 23, 2017 in Theatre | Leave a comment 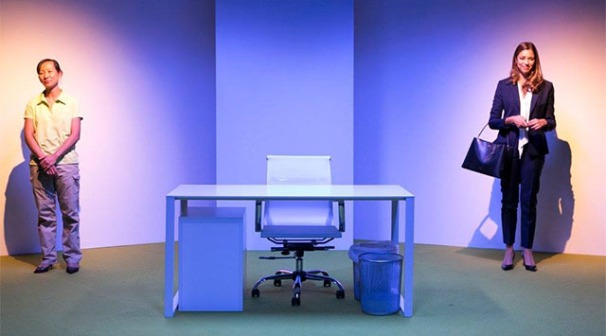 “Women indeed are human beings, but they are of a lower state than men and can never attain to full equality with them.” Confucius

“I should like to remind the women present here that no group, no community, no country, has ever got rid of its disabilities by the generosity of the oppressor. India will not be free until we are strong enough to force our will on England and the women of India will not attain their full rights by the mere generosity of the men of India. They will have to fight for them and force their will on the menfolk before they can succeed.) Jawaharlal Nehru, speech at Allahabad, 31 March 1928

In Rice, Nisha is spurred on by her grandmother, an Indian woman in Australia at the end of her life. This grandmother hovers Freud-like, too enormous to be evoked by utterance yet physically invisible. Michelle Lee paints The Didima as a post revolutionary styled after the social agitation of great Indian feminists like Pandita Rambai. The Didima wants her princess to be a great CEO in Australia. But the question for feminists working their way through the glass ceiling is always ‘Am I here as a woman or am I here as a man?’ Nisha has a chance to advance herself in her workplace by taking advantage of the poor in India. An Australian in India and an Indian in Australia, feminism, globalization and the politics of food tumble over her as she juggles the complexities of her situation. As always, there is a hysterical white male, eager to see her fall, ready with his philosophizing and his ‘rationalisng’. 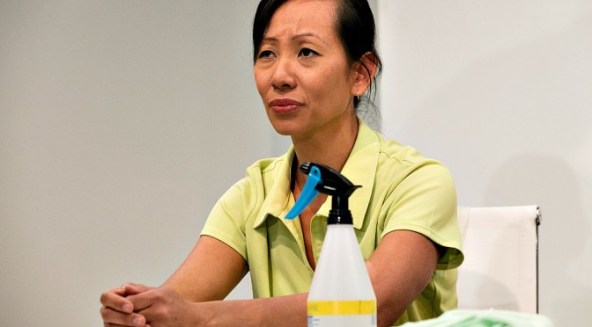 Yvette is a Chinese Australian trapped by the bamboo ceiling (hilariously controlled by a ‘sympathetic’ Russian) who is equally caught by the great dilemma of mother-ness. An excellent business selling designer knock offs to Australian women is thwarted by the activism of her daughter, who forges consumer campaigns against giant conglomerates. Or to put it more crudely, there is no getting away from mothers, even as children force you to be and manifest one. Mothers are there when you least expect them and most troublingly when you thought you had left them behind. Yvette is forced to confront the spectre of herself as mother even as she needs to forsake the mantle to provide. Embodying all the important conversations of our day, such as the limits of bourgeois feminism, feminism’s role in anti-imperialistic activity and the interlinking of reformist and revolutionary feminism, Yvette is a walking philosophy paper burdened with the imposition of sticky floor production. There is no place for Yvettes greatness. Like Nisha, she is Chinese in Australia and Australian in China and like Nisha, she is both freed and constrained by feminism, a woman’s greatest Mother. Ironically, it was Mao Zedong who referred to the iron nets that form a triangular cage that imprisoned Chinese women – Chinese society, a woman’s own family and her husband’s family – and yet it is global capitalism that ‘offers’ Yvette her hope of emancipation and security.

The essential and thrilling question that emerges from Michelle Lee’s wonderful work then, is what is the role of the modern feminist? Women are separated by our oppression, it is true, but we are equally united. If globalization is a poor master who secretly enslaves us, it is in the unification of humanity that a solution is to be found. Yvette and Nnisha are at the cole face of contemporary society. Forget the middle aged white male infuriated that the car factory has closed and he must learn new skills in hospitality or tech to survive. He is struggling with a question that needed to be answered thirty years ago. It is Nisha and Yvette who carry the modern problem of a dissociation between feminist principles and socialism, and it is Yvette and Nisha who need to work together to come up with a solution to these enormous global problems. A consistent complication for feminists in the modern age is the revelation of socialism as an impotent man’s game, but Michelle Lee asks, must this be a problem for feminism? 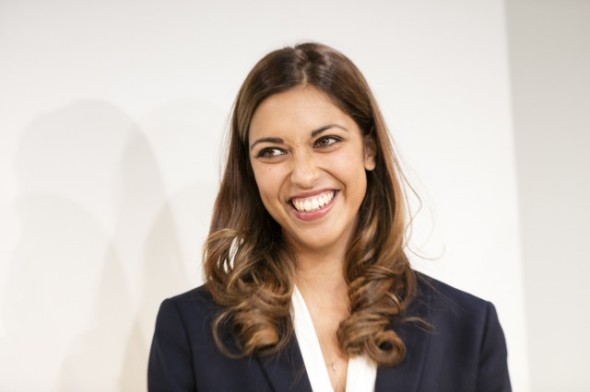 For Yvette and Nisha the great mother is both blindness and insight. No one is so inept, so embarrassingly giveaway as a mother-denying youth, but without a capacity for denial, grounded in the primordial connection to the body, there would be no such thing as thought. Michelle Lee is careful to remind us the problems of Yvette and Nisha are ‘out there’ not inside. There is no character flaw to ‘get past’ or ‘overcome’ (no hero’s journey) but there is a true battle to be fought and it is one of survival.

Michelle Lee’s words here find a true partnership in Lee Lewis’ direction. The multiplicity of modern femaleness is beautifully captured in each woman performing multiple parts of the whole, embodying the notion that the woman carries the weight of opinion in her psyche. Kristy Best (Nisha) and Hsiao-Ling Tang (Yvette) perform each role with a woman’s adherence to intuitive connection rather than actors’ performative tricks. This frees the audience to see the influential ‘other’ as a part of our self. Renee Mulder’s design centers the action around the classic office desk, where each woman fights the same battles, proving that women are united by feminism rather than ripped apart. Rice gives a whole new meaning to being ‘chased around the desk.’

Rice is a wonderfully contemporary work that engages in a conversation far beyond the right wing obsessing over political correctness. It’s difficult for someone trapped in that obsession to see, but it behooves us to stretch toward the work and allow the creatives to speak, rather than impose a willful missing of the point. After all, what can it hurt to see someone else’s position for ninety minutes? Its costs us more to lose the ability to look. 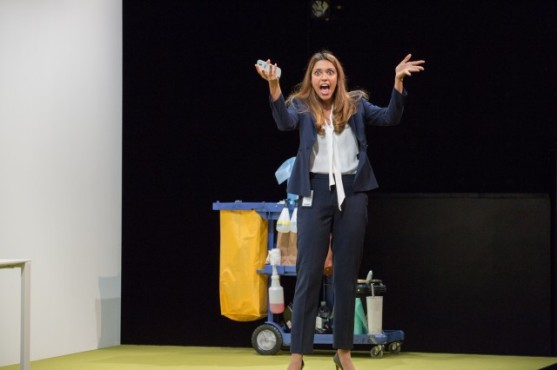