Home » Theatre » Sex Object – Conceeding nothing to the spirit of finitude. (Theatre review)

Sex Object – Conceeding nothing to the spirit of finitude. (Theatre review)

Posted by lisathatcher on April 27, 2017 in Theatre | Leave a comment

It was Nietzsche who argued that motives for certain types of morality stand in antithesis to its principle. Examples of these types of morality include industriousness, obedience, chastity, piety and justness. His counter argument was that adherence to this forced a human to be fodder for those connected to evolution, elevation, advancement and amplification of power. But as Charlie Falkner observes in his new play Sex Object, morality is currently in flux with Millennials and (just as Nietzsche would have it) under examination for authenticity. Millennials might be considered chronically politically correct (by the unenlightened) but this is also the generation that believes in start-ups and that growing your own business is the true measure of success. Their favourite attributes for person (or a brand that they have no problem appropriating) are that they be trustworthy, creative, intelligent, confident and authentic. They value collaboration, adaptation, creativity and self-transformation above everything, and see no conflict between their civic-minded behaviours and their global citizen status. Reinventing yourself is an expectation of this generation, and whites feel no marginalisation in stepping aside for black perspective just as men seek female viewpoint and sexuality is seen more through a Foucauldian lens than a religious text. I’m not claiming they are free from conflict, rather that their conflicts are not those of the older generations, which to a GenXer such as myself, is a thrilling prospect.

It is within this that we have the conflict Charlie Falker offers us in Sex Object. The contradiction is this: It cannot be ignored that this collection of twitter informed obsessives of self-love (note Sex Object is about masturbation – the sex of choice for both a group anxious to establish itself refuting sexual labels and the narcissist) who consider Facebook a childhood friend, are the same as the collective successfully producing the work. We couldn’t laugh at the characterisation of Millennials in Sex Object if they were as they appear when we objectify them. Jackrabbit Theatre Company can therefore be seen as the manifestation of Deluze’s point that nothing is interesting unless it is affirmative. Critique, impotencies, ends, modesties … none of that is as valuable as a single, real affirmation. Consensus exists within disunity and creativity is beautiful only when in the form of separation and disjunction. Falkner’s characters represent what Millennials are seen to be even as they performed by Millennials keen to be seen for what they really are: which is self-aware and actualising within the space of the real – or RL as a millennial would phrase it. 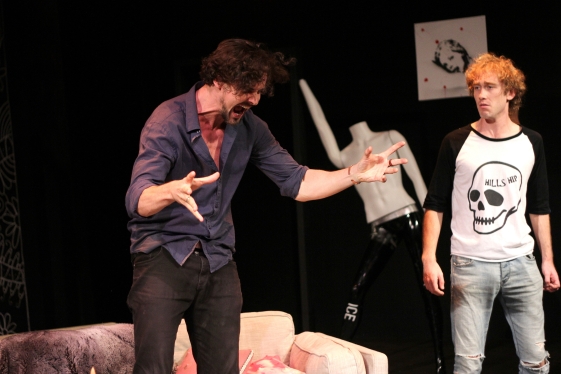 In this way, the so called natural form of thought transfers itself from judgement to personal experience, and the clumsy living fool is caught up in their milieu. Rising up against the negative in this way brings us back to the point that integral to everything is the affirmation of the improbable. Suddenly Sex Object appears as a play without a negation of any kind, rather trusting in becoming.

But isn’t this exactly what the Millennials are trying to teach the rest of us? While the boomers were fake fake fake and my own generation was refusing everything, the Millennials work with what they have while thought is remining faithful to the infinite. These appear as rules to those os us outside the game, but inside they are the embodiment of the cosmic expanse from Andrew Hearle’s ridiculously funny stride to Grace Victoria’s flaxen hair. Charlie Falkner, Michael Abercromby and their cast and team are the burning to a chaotic infinity about which we others live in fear and trembling. This is what is available to us in the short leap between generations and in the duel praxis Faulkner regularly exhibits, but particularly with Sex Object.

Of course Sex Object claims none of these pretentions for itself, they are merely the observations by a far too organised GenX thinker struggling with the limits of conformism. It is a silly, funny play that delights and thrills its age appropriate audience and slightly mystifies those outside its ephemeral walls. Of particular note in this production is the funny and skilled performance of Charlotte Davenport who is always a pleasure to witness.

Let’s hope Charlie Falkner keeps writing (and editing) and JackRabbit theatre keep producing and The Depot Theatre keep making a home for this special kind of magical work. There is nothing as exciting as our home-grown writers giving work to their friends for the community to enjoy and expose the human animal to that which exceeds it.

← Trade – What is money rather than what makes money. (Theatre review) Bengal Tiger at the Baghdad Zoo – Theatre in layers over time. (Theatre Review) →