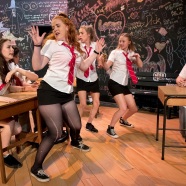 Posted by lisathatcher on April 3, 2017 in Theatre | Leave a comment 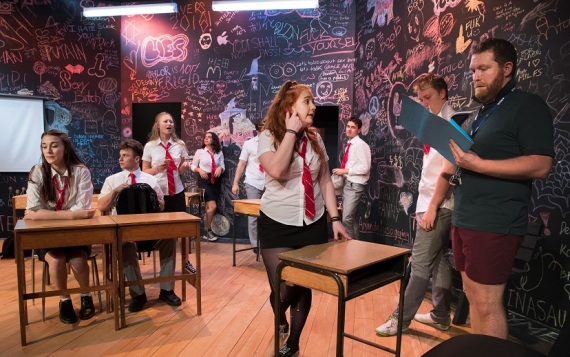 When considering the play Consensual, it is important to remember Evan Placey wrote it for older teens still at school. Therefore, it is an adults conceit to imagine Consensual is attempting to apportion censure on either of its primary protagonists, for blame is easy to cast. Freddie (Paul Whiddon) is fifteen at the time of the physical interaction between himself and twenty-two-year-old teacher Diane (Lauren Richardson). Freddie is too young to give consent to a twenty-two-year-old. That is the law. In the parallel narrative, student Georgia and assistant teacher Mary discuss Georgia’s sexual relationship with her boyfriend. When experimentation turns to exposure, parental eyes are cast over the teachers and sex ed. Consensual, then, is a question posed to teens about their relationships with teachers, what constitutes crossing a line (from the student’s perspective) and navigation of reflection in the gaze of the Other. 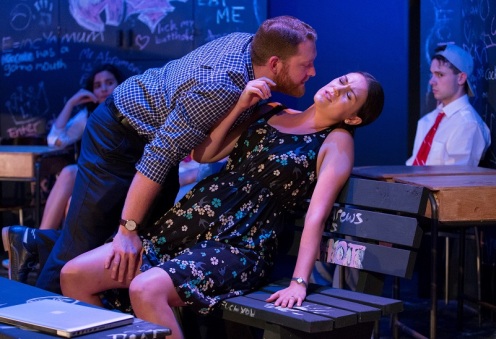 Placey makes much of a confusion between sex education class and the appropriate parameters set by the law between teachers and students. Sex is the presumed pathway to freedom for the teen, and Placey argues in Consensual that freedom is still a matter of individual consciousness. Placey’s protagonists are not judged according to law, rather integrity to their own agenda, or desire for conscious freedom. The relationship to the Other is a given which establishes consciousness. The children taunt the adults, appearing older than their experience and the adults appear younger in response. Placey is hoping to wake in the young adults the idea of the mirror, that the relationship with the other is what makes me see myself. This means I can appear shameful (parents/law) overtly sophisticated (sex ed) or seeking an expression for my freedom (sexual practise). The immediate relationship with the Other therefore oscillates between masochism which makes myself be for the other and sadism in which I make the other be for me. In both cases freedom is germinated in being either through self-denial or denying others. Like the central dilemma Placey poses, this confrontation with the Other is a never-ending flight from being and existence is hell (as is Satre’s point when he claimed Hell is other people.). 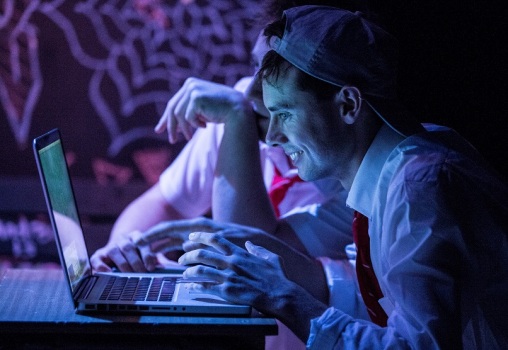 From this perspective, unity can only come from external impostions that collect us together and treat us as things. Here is both the insult and reformation possible in sex ed. The students are treated as things, the subject is condemned to conforming, and the thrill of experience is left to interpretation. In the case of the young, the interpretation of those with all the power. The collective gaze is always passive, and in this way allows the individual to be an active centre. The classroom becomes what Satre would call a “collective” which is a multiplicity of individuals whose unity is a passive synthesis. This, then comes back to the immense question of what it is to be a young adult. How can the free individual consciousness be a collective assumption? Every budding adult becomes consumed with their individuality in the eyes of the adults around them. Yet, according to Placey, that individuality is best expressed in the safety of conforming in the classroom. 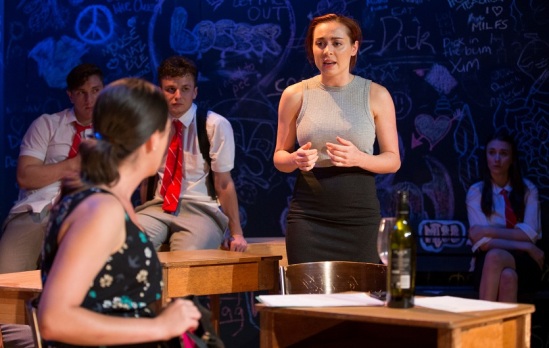 This idea is exemplified in the character Nathan (Callum Alexander) whose elegant conformity smacks of a sophistication ahead of his age. He appears wiser, even than the students experiencing “adult situations.” Nathan recognises himself as in a collective form of social inertia; each student is there for the same reason, but that common obligation brings students together externally. That externality is internalised in the form of everyone’s indifference to everyone else: I do not revel myself to the others, I merely attend school and engage in the same way as they engage. Any unity exists because everyone’s collective experience is the same. But these young adults are constantly burdened with the anxiety of similarity. As Sartre puts it: ‘Everyone is the same as the Others to the extent that he is Other than himself.’ Therefore, the unwitting law of the school is unity through separation. According to Nathan, the experience of sex ed, the experience of sleeping with another classmate and even the experience of sleeping with a teacher still condemns the student to being a product of their age, time and their circumstance. That is a seen and unseen student at the object that is school, rather than an individual having a unique experience. 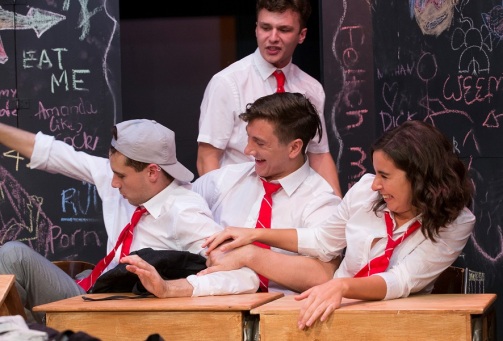 Consensual is therefore grey when it comes to metering out clear directives, as its ultimate hope is to get adult teen school children ot make choices ahead of circumstances engulfing them. This is an excellent production at The New Theatre in Newtown, enlived by a marvellous set by Renee Halse and thrilling sound by Johann Walraven and Nicky D’Silva. Johann Walraven directs the ensemble who act like a Greek Chorus of sorts, looking over the rest of the production with their observant child’s eyes. Excellent performances are called forth, particularly that of Paul Whiddon and Lauren Richardson who extend into brave territory to make their role work. Walraven’s direction encourages strong reflection, even as it injects energy into the text and keeps scene transitions simple. This is the sort of theatre you should take a young adult to. The one who attended with me found the provocative production thrilling. It encouraged her to make some stark and clear observations about her own school experience and the limits of contact with teachers that are close in our fervent conversations on the way home. 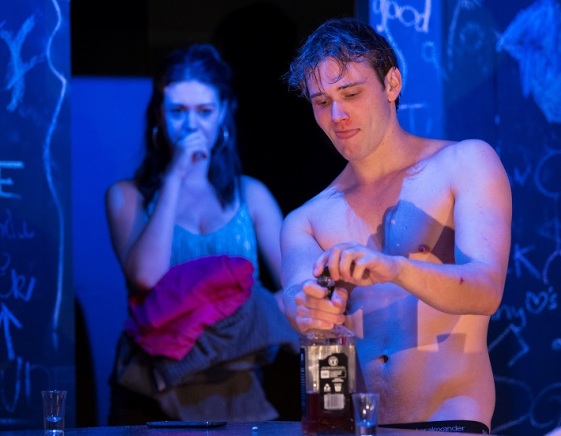