Home » Theatre » Osama The Hero – The danger of the stupid. (Theatre Review)

Osama The Hero – The danger of the stupid. (Theatre Review)

Posted by lisathatcher on February 1, 2017 in Theatre | Leave a comment 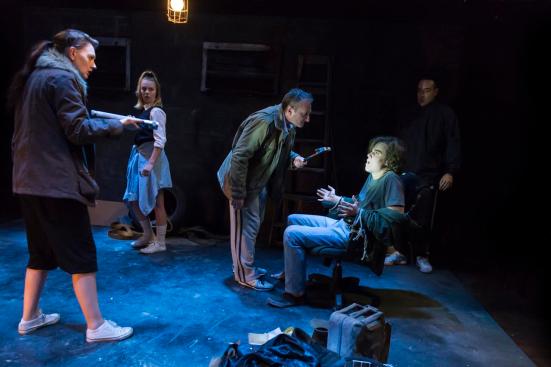 Tooth and Sinew in association with bAKEHOUSE Theatre co.

KXT from January 21 through to Feb 4

The irony is, what defines “In-Yer-Face” theatre is its ability (or rather its desire) to defy categorisation. Simultaneous with its recognition and labelling comes its refusal of conceptualisation as a genre due to a danger of pigeonholing this style of theatre that emerged from Britain in the late 90’s. The presumption is, any reference to genre or category or theatrical trend gives way to the imposition of an audience expectation fed by literary analysis that will serve merely to domesticate the work. One does get a sense of this problem inside Osama The Hero, currently showing at Kings Cross Theatre. Osama The Hero carries inside itself the question of preconceived notions, both within its narrative and its historical context. The audience is then coerced (by what?) into a dance of distance and recognition with our own stupidity. The characters within the play are damaged folk who behave stupidly while out of control. Equally the critical audience, seeking to deal with the level of violence and clarity presented on stage, behave stupidly in their attempts to judge, analyse or categorise the raw and open way the play presents the violence we have learned to assimilate into our lives. Osama the Hero is an obviously post 9/11 play, and yet, strikingly, in the time since it was written, we have learned to accept and ingest the stupidity of the characters on the stage. Surely the pinnacle of this is the election of Donald Trump and his recalcitrant stupidity? What most shocks about this excellent production of this challenging play, is how sensitised we are today. We have ingested the categorisation the writers warned us about and imposed distance on the play’s horrific reality.

It is someone’s obligation to identify and name that which is stupid. In the past, this job has fallen to intellectuals who can point out that which has failed understanding. As the audience experiences in Osama The Hero, this act is fatally stupid, in that it is an attempt to establish itself and territorialise its findings. For the most part then, stupidity, as properly discussed and defined is absent from the concerns of contemporary enquiry. There is no vehicle of the people, such as politics or ethics has been uttered to act upon the pervasive pull of stupidity. And yet stupidity is everywhere; rising to prominence last year. For a thinker, such as Schelling, stupidity is a primal drive at the origin of being. It is a “primitive, permanent chaos, an absence of intelligence that gives rise to intelligence.” (Stupidity – Avital Ronell) Seen in this light, the stupidity of the characters in Osama the Hero is not there to have us theorise on behaviours in terms of cause and environment, but let the audience experience a corresponding moment of creative response to the challenging behaviour displayed. There is no access to this through categorisation. Only raw, visceral response allows intelligence to grow in the absence of intelligence. 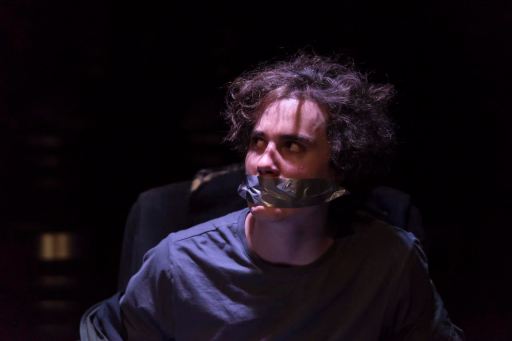 What Richard Hilliar then asks, through Dennis Kelly’s work, is what do we do with these folks who are suddenly everywhere (out in the open) and whose voice is conditioning their own demise? Stupidity loses its power in exposure, but it is not enough to expose stupidity. A creative intellectualism must take its place, but it equally must be born of the stupidity it counters. It is no small thing that the best political commentary now is coming from comedians in the United States. This is the intellectual stupidity flung in response. Denis Kelly uses it in Osama The Hero. Cleverly, Richard Hilliar sublimates it on behalf of our chilling numbness to the horrors of the character’s actions on stage. It is fine to laugh at stupidity, but it is not enough.

This and more is available to be digested in this excellent production of Osama The Hero currently showing at Kings Cross Theatre. Richard Hilliar has a talent for drawing great performances and this production is a strong example. From Tel Benjamin’s excellent accent to Nicole Wineberg’s brilliantly executed Louise, the direction allows the human inside the character to emerge and carry the audience into the darker realms of the chaotic creative space. Joshua McElroy’s beautiful performance serves as a linchpin between the stupid and what is possible, but even his Christ like sacrifices aren’t enough to save him or those around him. Standouts in this production are Poppy Lynch and Lynden Jones who bring their own surreal oddities to the stage to counter the recognisable in the others. Lynden Jones forces a human face on his monster that brings Mark very close to the psyche. Poppy Lynch forces a curious radius around Mandy that defies the temptation an audience member has to victimise her. In Osama The Hero, victims are stupid people too.

The play is supported, firstly by the venue which is emerging as one of the best inner city spots to connect to raw indie theatre. Tegan Nicholls gives us sound that draws us deeper into the parts of our self we’d rather not visit. Lighting by Sian James Holland is specific and clear, assisting with direction around the various movements on the stage.

Osama The Hero is a deep, compounded theatre experience whose pieces come together to forge an enormous whole. The most thrilling aspect of this production is the journey the audience are invited to take from viewing stupidity as “a tiny calloused area of insensitivity” (Horkheimer and Adorno) from which we protect ourselves with moral reason, to a dark creative explosion of chaos we have yet been unable to wield. Considering what we face in the world today, this makes Osama The Hero an essential theatrical experience.

For this review, I relied heavily on Avital Ronell’s beautiful book, Stupidity.