Home » Theatre » Orpheus – The surface as fertile soil for what lies beneath. (Theatre Review) 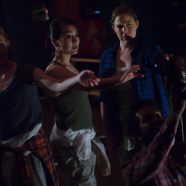 Orpheus – The surface as fertile soil for what lies beneath. (Theatre Review)

Posted by lisathatcher on August 22, 2016 in Theatre | Leave a comment 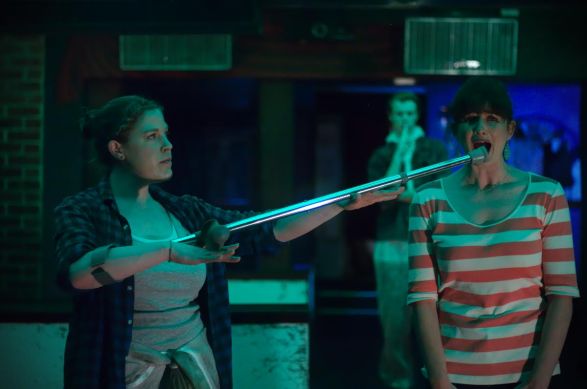 Lies Lies and Propoganda in association with Suspicious Woman Productions

If it’s a mystery as to why the character Orpheus is so important to Western culture, then it is equally a mystery as to why it has become less so toward the end of the enlightenment. The story of Orpheus and Eurydice, a man’s descent into hell to search for the wife he may or may not have deserved only to lose her to his own lack of self-control a second time, resonates throughout the evolving relationships between men and women, particularly when the beauty of Orpheus’ song is brought into the mythology. A possible explanation for the slipping of the grip of this famous tale is the stories emphasis on the spoken word narrative, a historical record device that has transformed into something unrecognizable these days. When the tale of Orpheus and Eurydice emerges it reveals itself to be an astute examination of the relationship between music, love and the mystery of the creative drive. In the hands of the Lies Lies and Propaganda theatre company, the tale of Orpheus, deconstructed and rebuilt like the many incarnations of its main character, becomes a mediation on love and is importance in accompanying us through the inevitability of living out our fate.

In this version of Orpheus its gloomy end is stitched into the mimed violence of its beginning. Taken from Eurydice’s perspective director Michael Dean moves the judgements of good and bad and replaces them with the gothic air of the Australian outback, so that the underworld becomes a quirky Australian country town pulsing with the sort of weirdness’s we see so well represented in films like ‘The Cars that Ate Paris’ and ‘Picnic at Hanging Rock.’ Just as we know Orpheus will fail, the play itself embodies this, and events are played out inside the reflexive knowing we must include. Orpheus is famous for his music, no longer the music that accompanies speech, it contains/renders a message of its own, deeper than one delivered in words. As Rousseau would clam, instead of merely imitating or representing the effective features of verbal speech, music should be given the right to speak for itself. According to director Michael Dean and creative assistant Jasper Garner Gore it is not the journey that Orpheus takes to the underworld that holds the hope of reuniting with Eurydice, but the journey Orpheus will take within himself as he loses Eurydice (twice) that will have him become the poet we know he will be. It is this double representation, the mimicking of the sublimated life by the Gothic externalized world within the play we all know so well that the inner life becomes truly symbolic and representational that the seeds of creativity life. It is only when Orpheus is willing to die when the pain of losing Eurydice is impossibly great that he will assert the radical subjective autonomy required to create.

For Michael Dean, when Eurydice is drawn back into the nether world, the gothic reality of a rural Australian landscape, it is not so much Orpheus’ error, nor her own hypnosis that draw her back, but the inevitability of the well-known narrative. This play telling the story of itself calls to mind the Brecht’s “learning Plays” where he would have one actor play two conflicting roles, only to reveal the impossibility of one performer fooling himself. Orpheus and Eurydice are condemned to the story of Orpheus and Eurydice, both within the nightly repetition of the play itself and in the passed down spoken history that has survived and revived itself from the Greeks. And yet no music will be made, no beautiful songs sung, no art created without the repeated and endless sacrifice of Orpheus losing Eurydice and Eurydice embracing the nether world to leave Orpheus to his transformative pain. As Michael Dean reveals to us, it is the artists’ lot to be drawn into the radical pain that will form them. The journey will seem new but each artists follows in the footsteps of the thousands gone before them to experience what is the same old thing but that will forge the creation of something new. In this way, Orpheus and Eurydice are partners in making all we attribute to Orpheus alone, co-creators through self-denial.

This production is typically lush fare by the Lies Lies and Propaganda Theatre company. Cocooned in the bohemian stretch of the Blood Moon Theatre, Liam O’Keefe has managed to impose a complex lighting structure that evokes the Gothic nature of the work, supported by the music of Michael Yore, sound being so central to the story of Orpheus. The skewed, strangely flowing narrative stretches from the joint creativity of director Michael Dean, co-director Jasper Garner Gore and the cast themselves, collaboratively imposing a dream scape over the discombobulated smoulder of sublimation. If society is the order we need to help facilitate the articulation our own inner chaos, then this production of Orpheus allows us to see social convention as its own perversity moulded and shaped not by denial, but by its collaborative partnership in burying what we hope will remain hidden.

The cast are thrilling and diverse, with Daniel Monks as a beautiful Orpheus, his enormous physical presence sometimes incorporating the narrative and sometimes standing above and over it. He is complimented by the sweetness of Lana Kershaw as Eurydice, a doe-eyed floating beauty moving in and out of a self-hypnosis. Michael Yore and Curly Fernandez are each dramatic figures as Hades and Persephone, imposing their symbolic will over the story structure. In this they are supported by Dymphna Carew, Bodelle de Ronde and Victoria Greiner as The Furies, a saccharine sweet chorus mirroring back the kind of consensus used to bury the truth that needs to be seen. Artistic design at the hand of Catherine Steele and help from movement consultant Rachel Weiner round out the visual image that is as splendid as we have come to expect from this theatre company.

Lies Lies and Propaganda and Suspicious Woman Productions work well together to bring thrilling shows to our Sydney stages. Orpheus is another example of what a group of talented folk with a shared understanding can achieve. Orpheus is a fine addition to the 2016 Sydney theatre calendar and not to be missed.