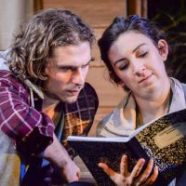 Posted by lisathatcher on July 17, 2016 in Theatre | Leave a comment 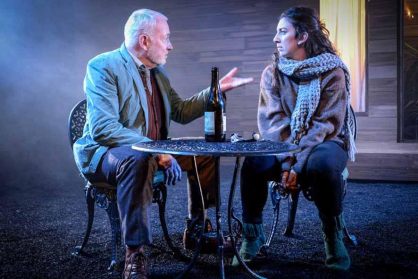 New Theatre 14 – 30 July You can grab your tickets here

What we know of genius remains a triumph of mythology over science despite many hours and dollars being spent in research via multiple fields. Abounding myths regarding genius are immortalized in our culture; geniuses are male, recognized early, productive in their youth, welcomed or rejected emphatically by peers, mentored and struck by a lightning bolt of creativity resulting in The Work. But the most prevalent myth about genius is the relationship between it and mental illness. Above all the other myths, genius’ are Emily Dickenson’s or Fyodor Dostoyevsky’s, troubled, self-destructive misfits with the most common trait of connection with the outside world being critical observation of eccentricity. This supports a popular idea that genius can’t be stopped, that it “wills out” no matter what the odds. Intellectuals such as Bertrand Russell have opined that genius can be crushed by society and needs to be given an environment in which to flourish. These notions stand in contrast to Kant for whom “Genius is a talent for producing something for which no determinate rule can be given, not a predisposition consisting of a skill for something that can be learned by following some rule or other.” Even the IQ determinate of one hundred and forty-five is now regarded as insuficient for measuring genius, as other traits such as drive and persistence are just as important. Genius’ such as physics Nobel laureates William Shockley and Luis Walter Alvarez are abandoned by the Terman studies of genius because their IQ’s are too low. In the year 2000 when David Auburn wrote Proof, studies were still following the evolutionary narrative but discrediting IQ’s, the theories of madness and the value of the Terman study. Proof then comes when the idea of genius was being radically re-imagined. 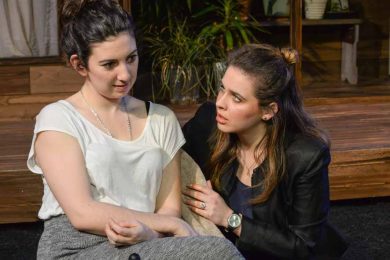 David Auburn casually debunks all but one of the myths about genius, which he subsequently disentagles slowly. His play contains two brilliant minds, a man and a woman linked genetically. While his male protagonist Robert does his best mathematical work in his youth in a university setting, his daughter Catherine does hers in her late twenties in isolation but for the inspiring presence of her father. While Robert is known to be a genius, Catherine is not. Both protagonists labor at their work, slaving away and writing tirelessly to create, defying the “lightening strike” mythology. Both are driven and both relentless. The central question of Proof however is the one about mental illness. Catherine is the age when Robert was first diagnosed. And yet, it is also the age when she has achieved a work of brilliance. On the surface, Proof appears to herald a death knell for Catherine – inherit the genius, inherit the mental illness. And yet as Proof implies, there is no evidence of Catherine’s mental illness, only what we inherit about the nature of mental illness ourselves. Before the proof of genius, Catherine appears to be mad. After the proof of genius, it is clear Catherine isn’t. Madness and genius are not synonomous. Robert didn’t die young. If Catherine has his illness, it will lead to a great body of work over a long period. At least this is what David Auburn implies in Proof.  The question of genius for David Auburn lies more in the Bertrand Russell and Kantian definitions. Catherine flourishes when supported and appears to be mad when the world works against her. She works in isolation, but under the respect and admiration of a supportive other. There is no way to prove that she is a genius, there is only the work and its consequences. Is it possible, suggests David Auburn, we are forcing mental illness on the genius for our comfort? 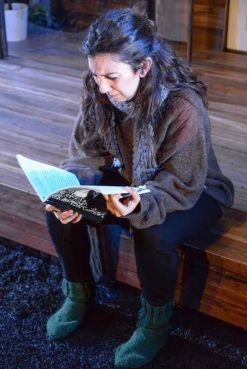 Proof as interpreted by freefall Productions is currently showing at The New theatre in Newtown. This is a faithful presentation, retaining all the nuanced complexities of the original play, such that the powerful writing shines through the great performances. Emergent are David Auburns ways of setting up movement through time and his small surprises that continue to be enchanting even if you have seen the very famous film or the play before. Ylaria Rogers is a strong Catherine, bringing her own stamp to a role previously performed by so many great actresses. She is a declarative and mature Catherine defiant and withholding rather than unsure and introverted.  Rogers plays her Catherine refusing a world that doesn’t deserve a treasure rather than a scared child retreating into the memory of her father. It’s a more modern take on the classic and it brings Catherine up to date in the rapidly changing way we perceive female intellectuals. Her sister and antagonist Claire is played to perfection by Julia  Christensen. Christensen captures Claire, given her good natured social awkwardness a dark malevolence laced in oppressive love. When the laughs come in Proof, they are more often at the hands of Christensen who has impeccable comic timing and calls forth the most from this role. Alex Brown is a cute and artless Hal, his sweetness soliciting several “Awws” from the audience on the night I saw the play. Peter Flett is a dignified Robert who makes his strong lines his own, taking full control of his difficult role. Fletts performances against Rogers are some of the highlights of the show and brings out a different dynamic to any previous incarnations of the play I’d seen. Director Derek Walker has worked a great deal with the performances and given a modern face to this much loved play. A special mention has to go to Jeremy Allen for his remarkable set design which gives the wordy play a much needed other world to transport it. Scene changes take on their own vibrancy with Alexander Berlage’s lights and some stark music posited against the structures lettered nature, but this adds to the expansive essence of the play and encourages the audience to think outside the narratives face value.

Proof is yet another great addition to the Sydney 2016 calendar which is serving up plenty of world class theatre. 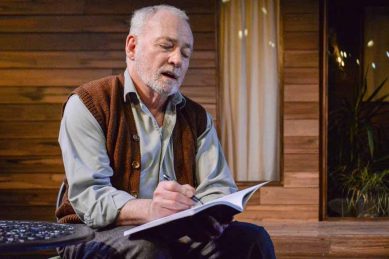