Home » Theatre » As We Forgive – Seeing ourselves in the eyes of youth. (Theatre Review) 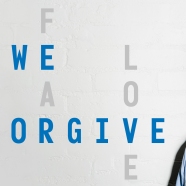 As We Forgive – Seeing ourselves in the eyes of youth. (Theatre Review)

Discover more about As We Forgive here.

It was Freud who asked not if a man is justified to be jealous of his wife, but rather why his jealousy was necessary to his sense of self worth. In a world of unexamined morality – a morality sprung from the hysterical responses to a variety of controlling mystical forces dispersed through time – Tom Holloway uses As We Forgive to ask what is Forgiveness? In three beautifully performed monologues, men examine their relationship to the concept of Forgiveness as it arises from them, an unexamined latency planted by an unseen force. The first man surprises himself by planning a physical revenge on a much younger stronger teen after an assault in his home; the second decides not to Forgive the emotional abuse exacted upon himself by a later day repentant father; the third has himself to forgive for a terrible accident that stole his children from him. Each man engages with forgiveness in the universal, each man uses it as a measure of self worth and each man is engaged with the complex relation between men and children.

Writer Tom Hollaway’s encounter with children then, in each case, interrupts a systemic order that existed (possibly through the same unexamined mysticism) to impose an adult existence over a world impossible to control. The global condition of religious hyper-fervour we witness can be seen as nothing more than a symptom of the withdrawal from freedoms of an intellectual, secular, communicative and psychosexual dimension, a stop gap solution to our worlds proliferating and competing complexities (issues of population, ecology, and sustainability of the biosphere and human communities). The same can be said for the refuge we take in intellectual thought, whose founding fathers emerged from the same mystical oceans. Even the comfort of systems representing the opposite, architectural, logical, conceptual, rhetorical, structural, semantic and subsemantic levels and elements come into conflict when an examined life is be turned on its head through a certain encounter with the Real. When Tom Holloway asks us to consider the concept of Forgiveness, he appeals to all these forces, and yet when he includes the child as respondent, we are forced to encounter a reactive environment that is more akin to play than consciousness. In this way, while each of the three protagonists has different experience, each deals with something they did not expect that interrupted the moral, logical and systemic structures counter to play and, as emerges in As We Forgive, seem structurally insistent on imposing the adult in a world where the adult may not exist as easily as we imagine.

One emerges at the end with the idea that Forgiveness is not an intellectual or spiritual construct, but a fluid response, differing with stages of life, the depth and breadth of one’s world, and a willingness to respond to the impositions of systems that insist on the adult as ideal. Is Forgiveness as real an experience as Love, that while it remains a mystery, is a condition of humanity, or is it a systemic construct that relieves the freedoms associated with play? As each of the three men encounter the child in their world, they become children themselves as they transform into different (better?) adults. Engagement with feelings inspired by a child (or childishness) reveals itself as a kind of game that affords the participants the illusion of control, allowing them to take part in (to whatever degree) in the programming and output of the system. Tom Holloway seems to suggest it is the childishness in emotionality that, via the illusion of control, allows us to become better adults. Forgiveness then, is the name we attach to one of these many processes.

The depth and potency of Tom Holloways words are brought to life through Julian Meyrick’s direction and Robert Jarman and cellist Jack Ward’s performances. The unspoken swirls around the room like smoke, shifting through Jarman carried on the resounding depth of Ward’s sound. One is gifted a strong sense of the complexity of the subject while free to indulge in a systemic interpretation or grasp at something else, less tangible. The three monologues become a moving testament, not so much to the power of the child to impact the adult, but the adult’s ability to respond to a child. Behind Jarman a rectangular light box softly defines Forgiveness according to language, image, sound and soulfulness while remaining distant enough so as not to impose. The direction is meditative, thoughtful, encouraging a still response from an audience encouraged to look deep within as much as they are to follow what is happening on stage. Jarman’s performance is measured, gentle, skillful and alluring and keeps the audience breathlessly engaged while free to associate and assimilate their own histories.

As We Forgive is a moving experience, deep and confronting rather than politically enraging or concerned with making a rational appeal. It refuses easy answers and invites the audience to hover in a reflective space that causes the mind to examine one’s own experiences or those of close friends. Its gentle touch sits with you long after the show is complete, appealing to the lonely adult inside all of us. This show has a short run at Griffin, so be sure to grab a ticket while you can. 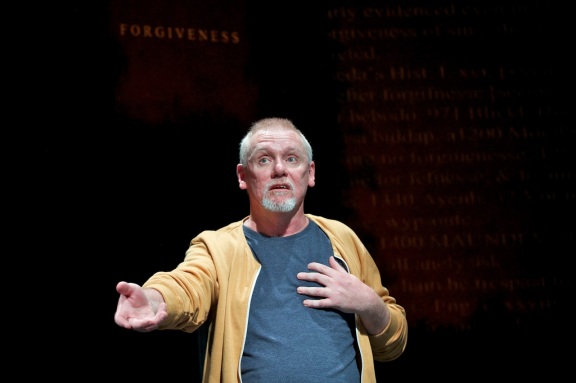