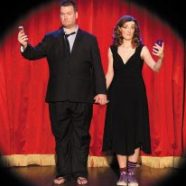 There’s No One New Around You: A Tinder Musical – Confused, tragic life makes art. (Theatre Review)

Posted by lisathatcher on April 28, 2016 in Theatre | Leave a comment 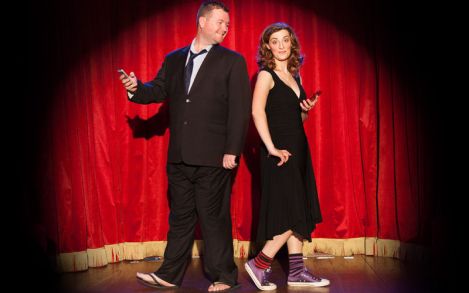 There’s No One New Around You: A Tinder Musical

Keira Daly and Mark Simpson offer a skit as the perfect opener to There’s No One New Around You: A Tinder Musical. A man and a woman sit on a train next to each other. They are both on their phones. Behind them Mark Simpson’s graphics on a screen reveal the conversation they are having unbeknownst with each other on Tinder. They swipe right and begin to playfully chat and flirt. In RL (real life) however, they are irritated by each others presence. As they jostle against each other they grimace and pull away. The real person is an intrusion into the joyful fantasy they are experiencing on line. Eventually the flirtatious couple on Tinder agrees to meet at a coffee cart. The RL couple push past east other, eager to get to the meeting place to experience their fantasy. Their mutual arrival becomes a poignant moment of realization that perfectly sums up the nature of sexual attraction on line.

If MTV heralded a time in music when the product and the advertisement became one, then surely the contemporary phenomena of online dating is a human version of the same thing. One ‘advertises’ oneself on Tinder and then searches through the advertisements of others. Placing your ad on Tinder is the price you pay for being able to shop there. Once in, you are free to scroll through the advertisements of others, judging and deciding as you would over any product. Yet, after being dragged in by that initial obsession, we find the original compulsion is replaced by the true message: she or he is making a purchase; they’re not for sale. The true test of online dating success then becomes how one can navigate that detour of an initial misunderstanding which continues to reverberate even after we reach the ‘true’ asexual meaning – which is that the woman you were just looking at as a buyer, was never on sale to you. Is she still attractive now you know that?

Everyone knows Tinder is about the fantasy. This is the ultimate difference between RL and the online world. In RL one is forced to confront the humanity and imperfection of the person in front of you. This confrontation is delayed online and the advertisement allows you to remain in object fantasy – even while conversing. Men used to retain the object fantasy of RL women but this harder to achieve with the rise of feminism. The joy of Tinder is the privilege apportioned to object fantasy. It should come as no surprise that despite anecdotal cries to the contrary, the group with all the power on Tinder is white males. Tinder then, is a reflexive fake, a desperate attempt to artificially reach/create the fantasy. Tinder offers a kind of window shopping of fantasy, an attempt to hold on to an ideal that the Other can be appropriated for your own purposes. Meeting the Other brings the fantasy into the light – keeps it at bay if you will. The ideal scenario is a mate who will help you do this. They provide enough RL to refrain from the impotent state of unrealized fantasy. When you have the hope of this freedom in front of you, the best you can do is have sex. The purpose of this sex act is to keep the fantasies at bay before they overwhelm us again. We do not dream about fucking when we cannot do it – rather, we fuck to escape and stifle the excess of the dream that would otherwise overwhelm us.

It is precisely this dichotomy between the fantasy and the real that Keira Daly places her current offering, There’s No One New Around You: A Tinder Musical. Mostly from the males perspective (rather than another cabaret show about the single woman) the story of Tinder becomes one of superficial women using Marilyn Monroe quotes, interface glitches, dick-pic-selfies and endless array of strangely pursed lips. According to Keira Dailey, Mark Simpson and Steven Kreamer the online experience itself is starting to blur the boundaries between RL and the fantasy and in very funny song after very funny song, the trio express this somehow cheerful frustration to an audience that laughs and thigh-slaps in great affinity. The three wrote the songs together, no doubt after a great deal of research, that include the horror date that goes bad, the app glitches and the aforementioned dic-pic-selfie complete with penis sock puppets. One particularly funny sketch sees Keira Daly as a prison inmate the hapless Mark Simpson has inevitably swiped. There’s No One New Around You: A Tinder Musical takes all of the deep psychological problems and pleasures of Tinder and distils them into clever pastiches of musical numbers put together and performed by three great musical talents.

Tonight is the final show of There’s No One New Around You: A Tinder Musical, but the show is so successful it’s likely to be on again sometimes soon. When it is, make sure you grab a ticket.