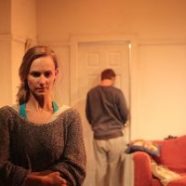 Posted by lisathatcher on April 25, 2016 in Theatre | Leave a comment 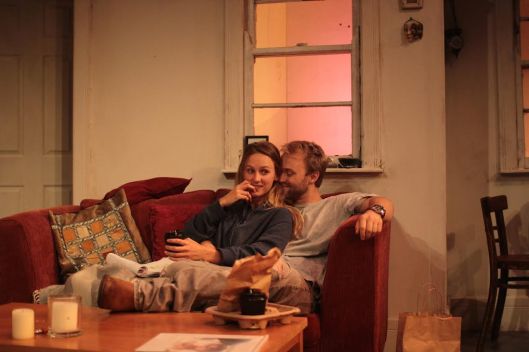 Old Fitz Theatre from 20 April to 12 May

The primary crises of Belleville are communication and desire. Desire and its lack exist in language all through the production. Zack (Josh Anderson) and Abby (Taylor Ferguson) live in Belleville, a fashionably “now” suburb of Paris. Abby has given up her French lessons because she feels the French ignore her anyway – language for her is about being heard, helped – while Zack assimilates French because language for him about controlling how he is perceived. Abby needs her phone to connect with her past and draw it into her uncertain present; Zack needs his phone to connect with a façade he has constructed for himself and avoid the future. Amina (Chantelle Jamieson) and Alioune (Aldo Mignone) speak French and English and it gives them power. They communicate with their sick baby through a baby monitor that becomes a symbol for Abby of her isolation. Zack, Abby and Alioune self medicate to avoid unpleasant confrontation with themselves and with the other in their presence. Communication, both with the other and the self, houses an idealisation that cannot be converted to reality; and good cannot be performed in the name of illusion. When reality is so separate from the ideal which houses communication, death and the ideal become partners. The death drive and the libido parallel each other. In primary narcissism, the libido is almost one with biological forces, but the death drive already occupies the same place. Abby and Zack used each other to avoid reality, instead evoking the others desire. When Abby falls to her feet with tears in her eyes and declares they can start again, she already knows, from what she has refused to tell herself, that another life is impossible for herself and Zack. 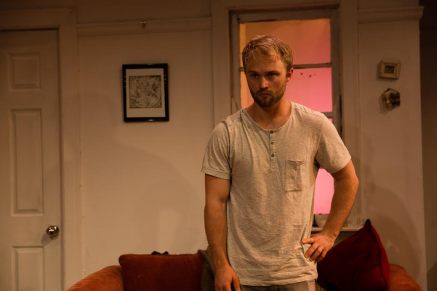 Writer Amy Herzog formulates a winding, masterful examination of the crises at the heart of the object/subject divide. Her central couple define themselves in response to the desire of the other; Amy makes herself weak and dependent for Zach, Zach makes himself a chaste knight-in-shining-armour for Amy. At a crucial juncture, illuminated toward the end of the play, surrounding an event in Amy’s life, we discover both married these fantasies, defining themselves by the object of love they saw reflected in each other’s desire. The problem here, one that Herzog brings slowly and faithfully to the surface, is the way these people cause themselves in the absence of that desire. Amy and Zack become causes to their self-made cause, looping themselves around, eventually forcing the initial event of their union to become traumatic. It is only after they have constructed selves out of fantasy they can return to the crucial moment in their past and see it as a traumatic event. The shock of Belleville is not the horrible inevitability of its final sacrifice, but the way Amy Herzog reveals the pair have constructed that inevitability out of their own object/subject crises. Amy and Zack no longer know what kind of object they have made themselves for the other, they are no longer looking for proof of their existence in the desire of the other. Because they made themselves partial objects on behalf of this desire, they are left with no choice other than to redefine their mutual history as tragedy. When Abby falls to her knees at her husband’s feet it is on behalf of their subjectivity. Desire is its own pleasure, it is never what we want. Abby sees this too late but still seeks to change the history through language by offering a future that obliterates the object roles each have built as a burden for the other. It is no accident that Amy Herzog uses the wedding as the pinnacle of this object/subject polemic, for what is the wedding other than the ultimate symbol of the ephemeral fantasy of desire and the drive to become object to court the other?

In the horror fairy tale by Hans Christian Andersen, ‘The Red Shoes,’ a poor young girl puts on a pair of magical ballet shoes that almost kill her because they never stop dancing. Her saviour comes in the form of an executioner who cuts off her feet with an axe, after which she is given wooden prosthetic feet, which help her find a kind of spiritual peace. The shoes in this tale show us what desire is; an undead partial object that functions as an impersonal willing. It uses repeat patterns in pursuit of what it wants with no regard for the subjects well being. Satisfaction at any price. In Belleville, Zack’s desire is to be Abby’s hero. It is this desire, this refusal of his subject self to remove the object he desires to see reflected in Abby’s eyes that will cause the tragic consequences we see played out in Belleville. 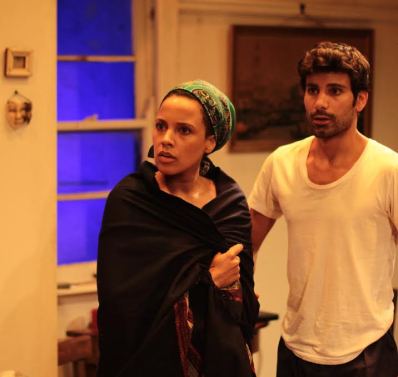 Such a complex and difficult play takes patience on behalf of the audience, for the great pay off arrives close to the end. And yet Herzog has provided us with signposts that work as a slowly burning reveal on the journey, working as thrilling suspense. Besides the masterful writing, Claudia Barrie has constructed a beautiful production that successfully expresses Herzog’s vision. Josh Anderson is particularly good as the tragic Zack, keeping all the twists and turns of his developing character in a sublime alignment that allows the audience to spiral into the depths of the human. We never sense Zack is behaving out of character despite the dramatic transformation he undergoes before our eyes, and it is this grasp of character that forms the axis upon which the rest of the play can turn. Taylor Ferguson’s Abby is a perfect hysteric. Panicked from the start under the weight of the unsayable in her world, Ferguson opens to an enormity as the young couples tragedy raises to the surface. The pair are bookend by Aldo Mignone and Chantelle Jamieson as the level headed couple, in touch with their own reality and the obvious example Zack and Abby sorely need. Barrie has them hover like satellites, symbols of what is possible and yet so far out of reach.

Jonathan Hindmarsh has built a funky set, part slumming it, part “now” environment for the chic couple to live in, while Laura Anna Lucas uses costume to convey the blurred boundaries between cultures, such an important theme of Belleville. Katelyn Shaw’s sublimated sound works as a delicate backdrop for the stage happenings while Benjamin Brockman’s lighting acts as signposts of development. The between scenes lighting in Belleville become transitional spaces, as if it signified stairwells or doorways not to freedom but as a journey to an inner darkness, thus forging an emotional connection between each scene that evokes movement and foreshadows tragedy.

Mad March Hare have done a wonderful job bringing Belleville to the Sydney stage at the Old Fitz Theatre. This is a deep, complex play directed by someone in full control of the material and her cast. It’s a great opportunity to see an Amy Herzog play if you are unfamiliar with her work and an even more chilling journey into what marriage can become and the dangerous way we can delude ourselves. Don’t miss this one. 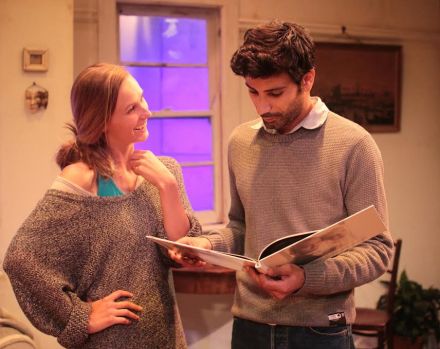