Home » Articles » The Best Brothers – Language as the vehicle for the unsayable. (Theatre Review) 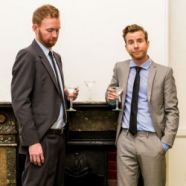 The Best Brothers – Language as the vehicle for the unsayable. (Theatre Review)

Posted by lisathatcher on April 20, 2016 in Articles | Leave a comment 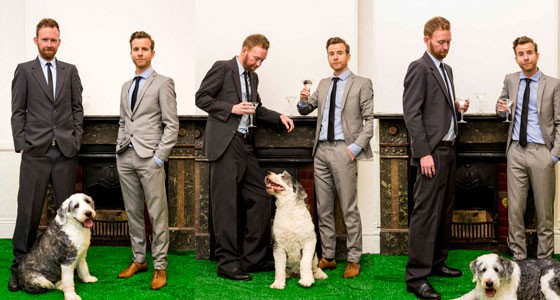 It was Wittgenstein who gave us the idea that a seemingly rash run of gibberish may be philosophically illuminating. More than this, seeing language used in a context, and understanding that context matters, may lead us to recognise necessarily ineffable metaphysical truths. Is this idea better exemplified anywhere than the family? Is it not the gibberish, the act of covering up, the automatic nature of patterned speech that you present to your family the very essence of what this idea holds? Our family is the Great Other – it is they who know you better and least (at the same time) than anyone you will ever meet. It is this dichotomy, this paradox that makes familial relations so deeply pleasurable and horribly confronting. Only your family can make you feel alone in the comfort of knowing they will always be there. Only your family can reduce you to the child you used to be while reminding you of how old you’ve grown. Only your family can understand your nonsense and can accept it with many and no questions, and mirror you back at yourself warts and all. And as Daniel MacIvor reveals in The Best Brothers, only your family can make you  feel truly loved and truly loathed at the same time.

Brothers Kyle Best (Sean Lynch) and Hamilton Best (Johann Walraven) are companions of the same parents; brothers. However, Kyle is vague, childish, enigmatic and deeply loveable, while Hamilton is respectable, sensible, responsible and difficult to love. This is the tragedy at the heart of The Best Brothers. Why is it some people are easy to love and others struggle with connection all their lives? Relationships are like communication, in that they can trick you into feeling that you have been seen, have been understood. Language is, essentially, a string of signs that have failed to symbolise; any meaning is caught between the words or in the silences that hover around what one is trying to say. It’s an interesting idea to allow communication to be this, to know that the feeling you get, that ephemeral moment when you think you understand the other before your eyes, is the best you can hope for, and the nonsense you sprout is the vehicle by which those feelings are conveyed. This is how Daniel MacIvor wants us to see Kyle and Hamilton. Kyle, bumbling, foolish crass and loveable against Hamilton, decent, proper, vulnerable, filled with doubts and unloveable, and yet both made special by their mothers exclusive and apparently wandering eye. It is in their mothers travels, her experiences, her distances that she loves her boys. Most of all it is in the unconditional love she feels for her pet, the silent potent force of love that evokes all the feelings Bunny has for her sons in his language free communication. We think animals are less than because they don’t use language. Is it possible they’ve chosen not to? 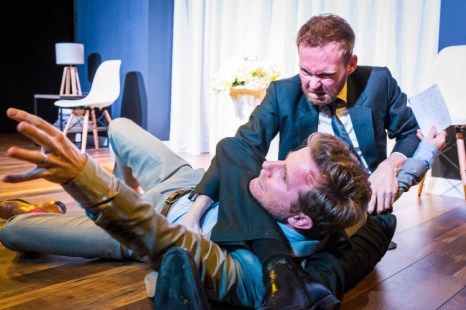 This is the essence of Daniel MacIvor’s great words and the excellent execution of them in this subtle but beautiful production. The actual words meander and appropriately, make us laugh at their tippling into absurdity. Still, we search for meaning, we want the punch line, and we hope for a meeting of the minds from these two grieving souls. But the very essence of grief is distance, and its tragedy is the lost moment. We see these brothers communicate through their patterns, through their longings, through their histories rather than through a chance to properly articulate their feelings. Language will always fall short of all you hope to say. This is not a fault at play, but a mere misunderstanding of what communication is doing and how it is revealing a version of a truth. It is not found in the words, it is found between the words. Kyle’s bumbling, loveable foolishness and Hamilton’s frustrated, unappreciated appropriateness are the essence of what is conveyed each to the other and it is those places that we need to seek the beauty of vulnerable communication. 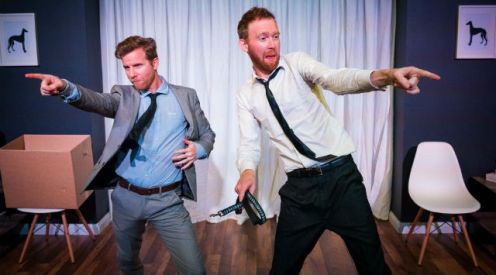 Of course it is not just words that can convey such potent meaning in a piece of theatre, but it is also direction, performance and production values that make such a complex and nuanced vision come to life. Gareth Boylan calls forth remarkably complex performances from his cast, one of which behaves exactly as he shouldn’t and solicits all our affection and the other exactly as he should and makes momentary enemies of us. Sean Lynch is beautiful, subtle and delightfully delicate in his connection with a great comedic role that takes subtlety as its greatest weapon. Johann Walraven as Hamilton stands behind Lynch, almost in his shadow even though he is the bigger, responsible brother, making himself thin and loveless by dutifully fulfilling the role that was thrust upon him. Lynch’s vague comedic distance posited against Walraven’s frustrated straight-man judgement provide a striking balance between the two actors who present convincingly as brothers but even more, convey a complicated relationship filled with warmth and a familial anxiety together. The Best Brothers is a delightful, intelligent production that has a great deal to say about communication and the way what you don’t say can keep you together just as much as what you do.

← Theatre I missed: Space Cats (Theatre review) Shut Up and Drive; or Sex, Liberty and the Automobile – Love and Lust with our cars. (Theatre Review) →