Home » Theatre » Plaything – Humour as a defense against the tragedy of being human. (Theatre review) 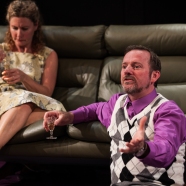 Plaything – Humour as a defense against the tragedy of being human. (Theatre review)

Posted by lisathatcher on April 9, 2016 in Theatre | Leave a comment

The Depot Theatre from 30 March to 16 April.

The question of humour and its role in our life exists at the heart of Simon Dodd’s Plaything. Two people, a female and a male, find themselves trapped on a stage – a limited world in which exists a great playwright who has given no clues as to how they are to get by nor a much-needed script to follow. This very funny play brings up questions about fate, our place in the world and what we are meant to do while we are here. But underneath the existential angst, the Beckett inspired waiting for something-to-happen-in-an-empty-room narrative, lies the essence of this reflexive play – the way we use humour as form of self-communication that deals with our encounters in the world. The tragedy for Simon Dodd’s Woman and Man is not that they have no control, but that they have limited control in a world they know nothing about. Whether this is fate sublimated to delusion or weather it is factual is irrelevant The woman and man are forced to confront the meaninglessness of the play they inhabit and their best response is to see the play as a game only worth making a jest about. By involving the audience in the play itself (the actors stare at the audience and the audience back at them and make nothing of this confrontation) we are given permission to observe our own ego from an inflated position provided by our super-ego, which in turn makes the ego look tiny and trivial. The essence of Plaything then becomes “in humour I find myself ridiculous, and I acknowledge this in laughter or even in a simple smile.” The humour in Plaything becomes a pleasurable experience of self-mocking ridicule. An antidote to the tragedy of being alive in an absurd world – the very tragedy it has revealed.

According to Freud, humour has the same formal structure as depression but it is an anti-depressant that works by the ego finding itself ridiculous. It is an identifiable cliché that comedians are often sad, tragic creatures but that is equally true of the space inhabited by the audience when engaged with the comic moment. When we watch Woman and Man floundering their way around the stage we see ourselves, as we do in all humour. We see ourselves as an abject object and instead of weeping tears at the world reflected in Simon Dodd’s mirror, we are able to laugh and find some consolation within that laughter. Humour is an anti-depressant that doesn’t work by deadening the response to life in a drug-fueled daze, or by deluding us with a transitory experience of manic or spiritual joy, but rather is a relation of self-knowledge. Humour is often dark, but it is always lucid. 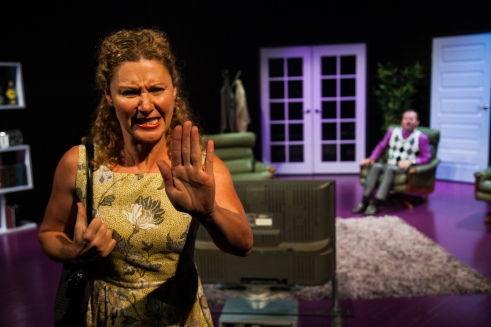 If this all sounds a little heavy, it needn’t be. Plaything is reflexive and a strange experience of meta theatre but it is also very funny and gives one a strong sense of laughing at oneself. It does take it theatrical and philosophical traditions from theatre of the absurd, but its comedy is more cerebral, less slapstick. The audience are invited to self examine, but the humour is sympathetic to our plight thereby evoking many moments of laughter. 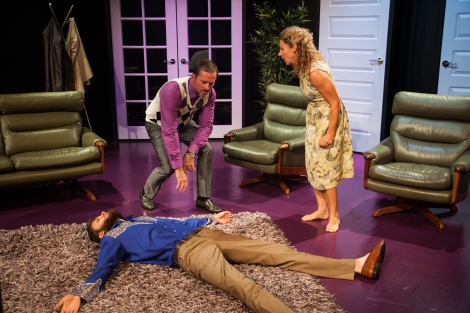 This is the second time I have seen Plaything and it made me laugh just as much the second time around boding well for repeat performances. Directed by Julie Baz this performance has a warmth that connects the audience with the stage action. She moves her cast around the stage area, sometimes with a frenzied action and sometimes with a reflective stillness that allows for the various nuances of the play to come to the fore. She is aided in this by a cast that include David Jeffrey as Man and Cherrie Whalen-David as Woman who each bring their own unique take on these important characters that are developed as the play moves along. While Jeffry’s character moves toward the absurd, Whalen-David’s is steeped in a realness that forces the two into an interesting opposition. As the dynamic between them fluctuates the audience gets a sense of the pair of actors getting closer together even as they move further apart bringing home the truth of their predicament. Spliced between their extremes is the slap stick comedy of Caspar Hardaker as Other Man, bounding in with extreme energy to further confound and intrigue the audience.

Eventually the three are met on stage with the Old Man and Old Woman, Michael Harrs and Cherilyn Price respectively who play their absurdist roles with so much abstract amusement it becomes infectious and quite suspenseful. Julie Baz moves characters on and off the stage as if they are life’s events, sometimes frenetic, sometimes playful and sometimes tragic. Under her direction Plaything takes on a complicated beauty not easily identifiable otherwise. Plaything is a wonderfully energetic fun play, but it is equally introspective and self-aware. This is one to take your capacity for fun and your intelligence to knowing that both parts of yourself will be well entertained.