Home » Articles » The Whale – the consumers guide to self destruction. (Theatre Review)

The Whale – the consumers guide to self destruction. (Theatre Review)

Posted by lisathatcher on February 16, 2016 in Articles | Leave a comment 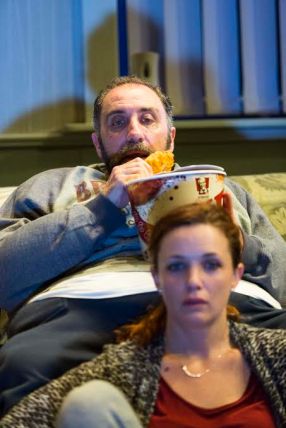 In a culture obsessed with the rights of the individual at all costs at a micro level and determined to reduce everyone to a statistic that serves the economy at the macro level, it seems one of the greatest crimes is to refuse to be beautiful. Beauty is codified into all good things; it represents health, engagement with an essential economy, self-respect and most importantly awareness of and respect for the gaze of our neighbour. Along side this sits the familiar liberal platitudes of “beauty is only skin deep” or “in the eye of the beholder” to appease our horrible guilt born of the obsession with a beautiful facade. But it is not necessarily beauty we keep in place, rather ugliness we keep at bay. A battle over obesity is raging within our culture; plus sized models, calls for the obese pay extra for health insurance, the demand to see obesity as a mental or genetic health issue, and most interesting of all, insistence that soft drink and fast food be part of the free market economy in imposing on the free individual the right not to eat the damaging product. The human body and the insistence we have that it be beautiful has become the perfect battleground for the opposing forces of the anemic left and the ravenous right. And in the meantime, obesity rises as fewer and fewer people take responsibility for their own lives in the face of a Capitalism that pretends it demands precisely that.

However, in Samuel D Hunter’s fascinating play The Whale, a way out of this dilemma is revealed. Charlie (Keith Agius) is choosing to kill himself by eating himself to death. He is lodged firmly in a grief from which he can see no escape, forged by the dueling forces of loving a man he had to leave a family he loved to be with. Charlie is the perfect embodiment of a life under capitalism in that he is driven to express his true desires for love in a permissive society only to find his soul dead with the damage his freedom of choice has caused others that he loves. In this he, like so many of us in the pursuit of an image of perfection, consumes himself to death; only his is a descent into ugliness, while the rest of us march on toward the facade of eternal youth. The political problem of witnessing this choice is exemplified in Liz (Meredith Penman) his best friend, nurse, carer and enabler, a woman constantly torn between his rights to do as he pleases and her obligations in society to help someone in need.

We meet Charlie in his last ugly days. He is bigger than he’s ever been, so much so that walking will fatally destroy his heart. He lives on the outskirts of Mormon country in Idaho, and we soon find he is dominated by the spectre of the all consuming Church and its insistence on pious beauty. Beauty becomes a central issue contrasting between the beauty of a teenagers budding awareness of the world around them through literature and the accusations of intentional ugliness that are regularly hurled at Charlie. Charlie apologizes constantly, the typical emotional stance for the thinking white liberal male. His guilt is such he can barely function. Constantly posited against his guilt is the enormous reality of his dogged insistence on killing himself by making himself repulsive – the ultimate symbolic function of Capitalist free will. Consuming Charlie as he consumes himself is the three pillars of guilt: family, church and love that together force Charlie into this relentless pursuit of the more that will destroy him. Hunter uses the joint literary imagery of Moby Dick and Jonah and the Whale to call forth the dueling battle of capitalism – the pursuit of the elusive catch and the half-life lived in the belly of that drive.

This production at The Old Fitz is directed by Shane Anthony who keeps his strong cast isolated in a small room around which the audience sit. Anthony wants to remind us that we are also consumers, encroaching in on Charlie in his last days, witnesses to that which we judge to be grotesque. It’s a wonderful device, using the small space to great effect. The cast are all strong, bringing their multiple frustrations to the bloated form of Charlie, but Hunter slightly underwrite’s his women, so the female cast members have a bit of work to do to establish depth. They are all up to the task, particularly Hannah Waterman who turns her comparatively short time on the stage into a moment of profundity upon which the entire play tilts. Colin Emmerton’s fine set is a combination of realism and suburban nightmare supported by Katelyn Shaws sound and Alexander Berlage’s lights which all work together to emphasise the often surreal impact the real can have on what seems to be normal.

The Whale is a great production at The Old Fitz and bodes well for the 2016 calendar for Red Line Productions. It comes highly recommended. Grab tickets while you can.