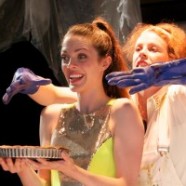 Posted by lisathatcher on November 17, 2015 in Theatre | 2 Comments

In Roadkill Confidential, moralising in all its forms, including strong characterisation, is absent. All the characters float by us. They are ephemeral creatures, existing as if they were on the end of a camera lens and we were watching them through a screen. The audience is kept distant. While we judge, it is only through the socio moral position that we judge. When Trevor is cruel to Melanie, we know it to be wrong because cruelty is wrong, not because Melanie deserves better. Melanie is an unwelcome parasite, a person attracted to art only when it has a “name” and a “repuation”that she can use to enhance her position in society. Trevor’s husband William is the same. An art professor whose legitimacy comes from the analysis of the work of others (much like a critic). Everyone in Trevor’s life, including the Government Agent pursuing her, determined to find her guilty of terrorism, is seeking his own legitimization through proximity to the artist. Trevor is used by society every way she turns. But she is who she is because she uses back.

Roadkill Confidential asks who is the artist and what are the limits of what we allow the artist to do and be for us? However it is more and less than that also. Callaghan refuses conventional theatrical tropes such hidden messages or “layers” preferencing an emotional connection to the present styling Roadkill Confidential more as a collaborative experience of unfettered creatives rather than a conventional play to be examined in a conventional way. It is no mistake that her protagonist Trevor is making art that kills people. Roadkill Confidential refuses old dead theatre and demands we kill off the part of ourselves that feeds it after midnight. It is a vibrant, alive play, combining emotions that shouldn’t go together, and using high energy as a vehicle for recognition and discernment. It’s the kind of theatre we are in desperate need of in conservative Sydney; progressive, fecund, cognizant and provocative.

Michael Dean and his group at Lies Lies and Propaganda theatre company have the ambition, skill and amplitude required to confront the material at hand, but Sheila Callaghan is a cerebral writer, so be prepared for an immersive experience that lures the mind into unknown quarters. Even as we watch, we are made aware of our desire for cohesive narrative, our need for – if not answers, at least a clear moral position – and our longing for a character to which we can connect. But even as we feel close, Sheila Cunningham and Michael Dean whisk the connection away, skewing the narrative into the abstract or absurd, while equally building a discombobulating noirish tension that demands to know what will happen. Catherine Steele has created a set that seems more like a painting or a diorama than a stage, leaving one with the feeling we are both the audience and critical judge, or tabloid reader, examining people’s lives through the lens of a cold contemporary discourse. Are artists allowed to kill people if its good art? Is the reverse allowed?

Famously, when Marina Abramovic laid benign artifacts as well as knives and a loaded pistol with real bullets at the feet of the gallery audience and invited them to use the artifacts on her, she walked away six hours later in tears dripping with blood, feeling that she was lucky to be alive. That was in 1974, two years prior to the Prostitution exhibition Michael Dean references in his notes to the play, and thirty years before Steven J. Kurtz was arrested for terrorism for accumulating DNA and other biological materials used in creative works meant to draw attention to political and social issues – the incident upon which Callaghan bases her play. How far is art allowed to go? In this country, At the time Kurtz’ case was dismissed for lack of evidence, Bill Henson was closing an exhibition at The Roslyn Gallery in Sydney due to naked photographs of a 13-year-old girl, and other children deemed to have been eroticised by Hensen’s gaze and the invitation he sent out for a “private viewing.” Even as these questions are raised Callaghan side swipes them, imposing an ephemeral glaze over Roadkill Confidential, reminding us there is a murder mystery of sorts at stake, and, of course more importantly, a paid night at the theatre. Catherine Steel’s gaze through the screen is a constant reminder of the close proximity of the artist and their audience – as if we were part of the same spectacle. Part of the same film, video or public record.

Michael Dean is supported in this ambitious work by strong performances that embrace the sense of collaborative expanse. Sinead Curry is an ebullient Melanie, that creature the art world hates, and depends upon for its life. Curry’s Melanie has a wicked innocence, a justification that comes from her adoration. It’s an exhilarating performance that calls forth the importance of the sycophant to art and the role they play in commercial society. Equally, Jasper Garner Gore’s William is the satellite intellectual, both the opposite of and identical to Melanie. Garner Gore’s self-effacing William and his useless essential analysis are a delicious affront. Nathaniel Scotcher is a wonderful child of art, a famous-for-being-famous modern-day socialite in the making. Michael Drysdale is the comic yet deadly serious agent on the trail of art, committed to exposing it as a danger to society, his loins wrapped in the flag, his performance one of a dark relentless comedic caricature. A performance so wrapped in ideology, the real human has been lost long ago. Alison Bennett is Trevor, at once the voice of reason, and the embodiment of fear art presents. She hates what she needs and bucks against a system that feeds her. Her Trevor is in constant battle with herself, aware of her power, and yet irritated when she sees it reflected in those around her.

Roadkill Confidential is one of the better productions you will see in Sydney this year. It’s breadth and scope stretch talons into the mind and expand long after the performance is over.