Posted by lisathatcher on October 7, 2015 in Theatre | 4 Comments 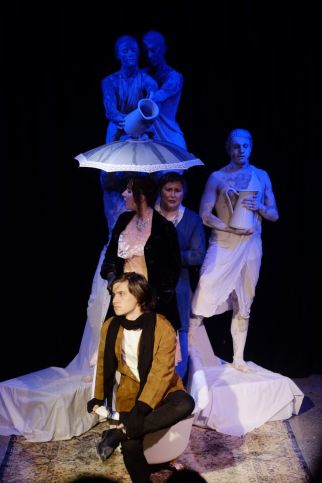 You can find out more about the production here.

It is an all too rare thing to see post-structuralism embraced in the theatre in Sydney (we labor endlessly under the weight of Analytic philosophy here at the ass end of the world) but I am thrilled to say when it does raise its head, it is usually out of the minds of our students, those people still naive (independent) enough to believe in experimentation and context. In the last couple of years some of the best theatre I’ve seen has been deconstructed texts heavily influenced, I am also thrilled to say, by the voices and creative intellect of young women. Three or four incidents over a year and a half does not a trend make, but I have good reason to feel encouraged, if not by the quantity of the work, then at least by the quality. The current addition to this fashion is UTS Backstage’s adaptation of Pygmalion as directed by Joanna Griffiths. Unfortunately at the time of writing this critique, the very short season for this production is over, but keep an eye on the Facebook page, as repeat performances are likely and this is a production worth going out of your way to see. 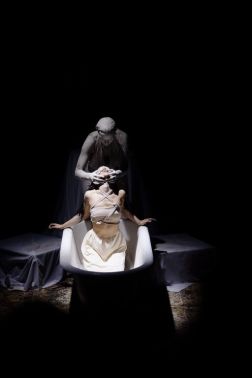 For a writer like George Bernard Shaw who wrote the very feminist Pygmalion just over one hundred years ago, the ideas embedded in his play were progressive and shocking. His open criticism of colonialism and the subjugation of women at the hands of men (I didn’t realise until I saw Joanna Griffiths adaptation how much of the binary oppositions he explores) were slightly subverted in the unique and clever idea of making the villain an enormously likeable character. Henry Higgins is so adorable, that Pygmalion’s dumber, more beautiful younger sister, My Fair Lady, refuses the idea of the original text wherein Eliza leaves him and has her return – to fetch his slippers no less. While the question of the multiple endings is one the play labours under anyway, it becomes shocking that Alan Jay Lerner sought to subvert Eliza’s emancipation at the hand of her own intellect and assumes her rightful place is at the foot of Henry Higgins. The need for the alteration of this ending, over fifty years after the original production hit the stage is realised in the film’s success. Pygmalion becomes more successful and more popular when Eliza is first emancipated and then domesticated. The rewards for Alan Jay Lerner’s flick of the wrist here are enormous, including the claim that he wrote ‘the perfect musical.’ (See, e.g., Steyn, Mark. Broadway Babies Say Goodnight: Musicals Then and Now, Routledge (1999), p. 119 ISBN 0-415-92286-0 ) Eliza’s central problem is that she is smarter than Higgins (in fact the three central female characters are) and in this lies both the seeds of her freedom, and the importance of her subjugation. Shaw has her arrive at the gates of Henry Higgins with her own money, seeking her own improvement. Henry Higgins refuses this request for a level playing field and uses his education against her immediately.

All of this is brought to the fore through Joanna Griffiths brilliant adaptation that works its way back the mythology Shaw first sought as his inspiration for the play. Griffiths takes Eliza’s street accent and makes it one of West Africa calling forth the colonialist indoctrination of Henry Higgins’ seemingly innocuous claim that learning how to speak properly (ie – education) will further you in life. Higgins seeks assimilation, appropriation and uniformity of culture – something he pretends he refuses. However, beyond this notion even lies the implications of the Pygmalion mythology itself. By evoking the Pygmalion myth, Griffiths is able to expose the depths of Shaw’s intent alongside the witty dialogue and charming comedy of errors Pygmalion is usually remembered for. Eliza is turned into a statue under Higgins’ touch, not brought to life. It is in her refusal of him she is able to breathe again. Griffiths explores this idea by bringing symbols of Parthenon sculptures to life to support and carry Eliza, as she is covered in a mask of clay that Higgins sits and a wheel and moulds. To further enhance the fear of the Other brought to the fore by difference, Griffiths has Eliza perform eastern ritual dreamscapes inspired by Artaud in place of the lengthy dialogue scenes of her ‘liberation through education.’

Yet, as she states in the notes to the production, Joanna Griffiths is faithful to Shaw’s work – faithful enough at least to retain his preferred ending. The familiar text is there related by Adam Teusner who understands where Higgins is coming from and Mikaela Rundle who embodies the weight of Shaw’s nuances through her interpretation of Eliza. This is a large cast all of whom come to life under Griffiths sure hand. The combination of mythology, history and social observation are already embedded in the text, so the additional commentary brings to remarkable fresh life a play we all thought we knew so well.

And yet all this is only the tip of the iceberg. One can’t help imagining Shaw’s delight at this production. Pygmalion was one of my favourite plays as a girl, and until I saw this production I didn’t really understand why it struck me so deeply. This production clearly articulates why we deconstruct texts, what we gain from doing so and why theatre is never about one dimension or creatives vision. Theartre is an exciting medium and a great way for the interior and exterior worlds to collide. Joanna Griffiths and her cast and production team have a strong grasp on what theatre can do and how it can provide such powerful impact on alternate perspective. If you get a chance to see this adaptation of Pygmalion go for it. It’s one of the best things I’ve seen this year.

← The Intern – Nancy Meyers on trend as usual. (Film Review) Black Mass – Deep chracterisation reveals there is no honour among theives. (Film review) →