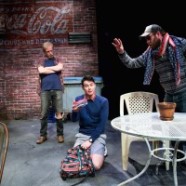 The Aliens – Outhouse Theatre and the real. (Theatre review)

Posted by lisathatcher on September 5, 2015 in Theatre | 2 Comments

Annie Baker is regularly touted as a “realist”, a title she doesn’t sit well with, and rightly so. In fact it is her depiction of very ordinary artifice, carefully layered phrase by phrase and gesture by gesture over the top of her characters attempts to be seen that act as the vehicle for honesty. It is not in the telling of our lives that we are known by the other, but in what we don’t tell, the vulnerabilities we try to bury. In this way, our personal truth, or our personal real, is called forth by our efforts to hide that same truth. We can all read the other better than we can read ourselves, and the terrifying experience of relating is that the other sees us also. The lie in the artifice is what we tell ourselves. Annie Barker is the modern-day hero of this observation, allowing her very ordinary characters to speak their piece, relying heavily on the audiences ability to see through to a deeper, unspoken humanity that lies pulsing beneath all attempts to cover it up.

For The Aliens, she deals with the notion of genius, or more specifically the backyard genius we all either know or fancy ourselves to be – most likely a little of both is Bakers unspoken contention. Her vehicle for the conversation is Charles Bukowski, the ultimate tortured back yard genius, a man who worked hard to live up to his own mythology and spent a life time obsessed with an elusive authenticity. Her three characters are only ever seen in the mouldy back yard of a cafe in Vermont under the shade of a large smelly garbage bin that acts as both emblem of embracing of an impoverished lifestyle and the means by which the trio launch themselves in and out of the yard – or on and off the stage. As Evan (James Bell) draws closer to the world of beautiful soul suffering inhabited by KJ (Ben Wood) and Jasper (Jeremy Waters) he uses the garbage bin himself to enter the small yard, rather than entering and exiting via the cafe where he works and grows a respectable life. Within each of these carefully crafted characters and the dominating monster of Bukaowski (and through him Baker) the audience gains a sense of a real hidden within each character pretending to be a fake that is pretending to be real. Evan is attracted to a certain idea of truth as a destructive force that burns within KJ and Jasper, who work hard at living each day as slackers reflecting the real which remains hidden except through the appropriation of copies of what it actually is. Bukowski then, is a ticket to this real, and it is only in KJ and Jaspers failed attempts to emulate him that they are able to succeed in a certain authenticity. The catch is, only their witness can see it. They never get to feel that realness for themselves, hence their suffering.

it is this layering and a careful identification with the driving mythologies that expose her characters in The Aliens that result in a pulsing depth of feeling and emotion the audience experiences by the slightest of nuances. Craig Baldwin directs his small cast with a strong intuitive connection to Bakers script that knows it says as much with silences as it does with words. His lightness of touch breathes through everything from the performances, to Ben Brockman’s stabbing yet gentle electric blue crackling, to Hugh O’Connors simple and highly evocative set. It must be a wonderful production to make with Bakers depth of feeling permeating everything, an experience that translates smoothly to the audience carried by the beauty of her words. Baldwin’s direction is made all the more powerful by his resistance of the temptation to “find the real and find the work” or inflict some clumsy sort of historical reductionism on the text. Instead he allows the play to be its own false reality acting as a conduit for a real the audience will inevitably find inside themselves.

It helps to have a superb list of creatives and outhouse have constructed an almost flawless production with all talents working in perfect rapport with the delicate material. Everything is subsumed by Bakers writing, educing a strong sense of the feminine, so even an all boy production (except for Eden Fordham’s stage management) never feels drowned in the masculine – something I found truly amazing, and an enormous relief. The performances are all top-notch, with James Bell bringing remarkable depth to a young man at the very start of his life, and Jeremy Waters contributing the full weight of his enormous charisma to the very alluring character of Jasper. Both are so good, and so strong, they can overshadow Ben Wood, who is their conduit and the most alien character to the audience, but like everything in this production, never do by remaining true to the subtle. A fourth of July scene is made all the more special by Brockman’s lighting inflicting a moment of the real that becomes frozen, as if the fireworks have planted a special reflection on the faces of the cast that won’t be erased.

The Aliens is one of the great Sydney productions of 2015, and another great addition to the season for Red Line Productions at The Old Fitz Theatre.

← Me Earl and the Dying Girl – Good writing is uncessesary if you tell us what we want to hear. (Film review) Articles at The Essential – The Guest →