Home » Film Reviews » Me Earl and the Dying Girl – Good writing is uncessesary if you tell us what we want to hear. (Film review)

Me Earl and the Dying Girl – Good writing is uncessesary if you tell us what we want to hear. (Film review)

Posted by lisathatcher on September 1, 2015 in Film Reviews | 2 Comments 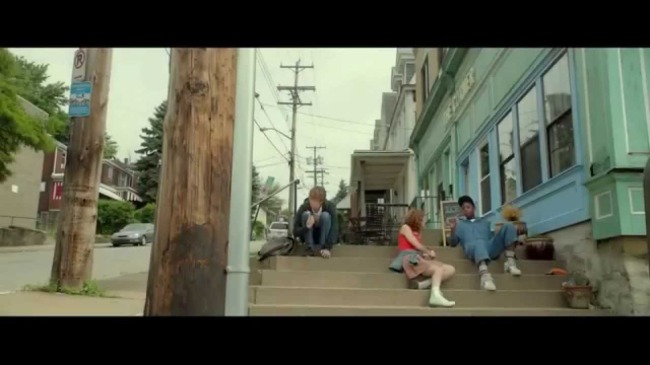 Here’s the thing about doing something clever. You’ve got to BE clever in the first place, otherwise your flash of lightning you think separates you from the rest of the population exposes you as nothing other than egoistic and naively entranced with your mind’s ability to function at the most rudimentary level. This is a problem for teenagers – and to use one of the clichés of this film, white male teenagers – who are so self-absorbed they don’t realise we all have flashes of insight, and it doesn’t make them a genius. Here we have Harvard graduate Jesse Andrew’s central conceit that he has translated faithfully to the screen. A man so deluded by his own imagined brilliance, he decides to scrawl a novel using the clichés of cinema as if, as a stand alone, they can act as an emotional vehicle. There is a place where this is kind of interesting, particularly when you take into consideration the emperors-new-clothes response of Sundance. However Andrew’s doesn’t have the wit to work out that is actually where his story lies, and instead he’s written three stereotypes that are so soul-less and uninteresting that his point about the cliché occurs as an aggressive intention to defend the tropes of bad writing. Quentin Tarantino he aint, but the central problem of Me Earl and the Dying Girl, is that Jesse Andrew’s doesn’t know this. He thinks he’s a genius.

And “look at how clever I am” becomes the central pivot upon which the entire film tilts. As the characters flail about with poorly conceived problems, faux snappy dialogue that is never able to topple into genuinely funny nor warmly insightful and every cliché imaginable from the titles not so clever joke through to the impoverished, street wise black side-kick and designated groups that tap into every other high school teen film ever made, nothign really happens. It’s telling that the best teen school films over the last several decades have had female protagonists, a signal perhaps that the clichés of highschool are more interesting when examined from the inside than observed as natural and inevitable from the outside. Jesse Andrew’s lazy point is that white male teens are perpetually on the outer, that they fit no where (now that they can’t dominate) and that this point requires no proof, no examination, no credibility  – it just is and we should all accept it in the same way we always accept the white male point of view. Greg (Thomas Mann) is criticised for being self involved without any story structure to support that criticism except that he is white and male so we should all just assume he is. He’s careful with his language now, calling everyone ‘colleagues’ in a very slight nod to the affectations of political correctness that comes off as petulant and sulky with no narrative parameters to imply he is taking a deliberate (accident or otherwise) political stand. Thomas Mann tries his darndest to make something of his remarkably boring lead character, but there is no room for another clever person and Andrew’s just won’t get out of his way. Despite the actors and director Alfonso Gomez-Rejon’s best efforts, everything about this film is at the mercy of a poorly constructed script that demands full allegiance.

As if all this confusion and blurred intention (that Andrew’s expects the audience to solve for him) isn’t bad enough, the final scene in the closing credits nails the central message home with an appeal for congratulation of Greg’s maturity, simply for noticing a female as something other than a narrative device for his own trajectory. The only hope Andrew’s has going for him is his inability to bring a point home, and the abiguity of his central message. When he does finally take a stand, it is so astonishingly the wrong stand, that any salvation the film may have evoked is dashed against the rocks. Andrew’s isn’t clever enough to work with suspense, so he directly misinforms the audience via his lead, but to disclose that removes one of the few reasons to make it to the end of Me Earl and The Dying Girl, so I can’t speak freely about the (semi) character Rachel, suffice to say we are left with knowing that not only did Greg impose himself on her, but he fully appropriates her, using her shamelessly to the point that he becomes manipulative and emotionally aggressive. He is astounded to discover (and wants to be applauded for this discovery) that Rachael is not only an artist in her own right, but a far superior one to him – something he uses as an anecdotal symbol of his own brilliant emotional advance. Rachel isn’t just a narrative device as the title implies. She is a far more interesting person / artist / mind / character that must be sublimated for Greg to have any appeal at all. Isn’t that clever?

This final rather shocking point, implies not only that misogany is a useful tool for setting women straight on the path to serving the male narrative rather than constructing their own perspective on the world, but it goes even further to imply it is the joyous natural conclusion that men need in order to shine. Forget competition, forget challenges. Men can’t compete with women, so in order to right the natural balance of the world, women must give accomplishment up and devote whatever they can of their lives to male accomplishment, and all will be right with the world. This is the only message hammered home by Me Earl and the Dying Girl, and one for which Greg gleefully seeks congratulation. It all leaves one with the impression that Andrew’s needs some serious therapy with his parents.

However worse than Jesse Andrew’s obvious problems with his inflated ego is the congratulation this poorly conceived script has received. I’m sure Jesse Andrew’s would be confused by a review such as this – bless him, he’s just not that bright. But the 80% male critical audience have something to answer for here. They either know this is a bad film and are supporting it for political reasons, or their ability to affectively criticise a film is inadequate. The same problem has occurred with his book – it received equal praise from critics. Film’s are subjective to a degree, but there is a question of craft and any undergrad film students can see huge character problems and terrible plot holes in this film. I’ve spoken before on this blog about the crises in film criticism and Me Earl and the Dying Girl is an extreme and disturbing example of a book that should never have been published through to a film that should never have been made (without extensive work shopping and editing) being given a golden ticket because it appeals to a stereotype of white male fantasy.

Olivia Cooke as “Rachel” and Thomas Mann as “Greg” in ME AND EARL AND THE DYING GIRL. Photo by Anne Marie Fox. © 2015 Twentieth Century Fox Film Corporation
All Rights Reserved

← Articles at The Essental The Aliens – Outhouse Theatre and the real. (Theatre review) →