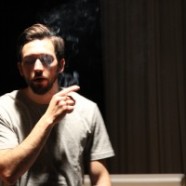 Posted by lisathatcher on July 20, 2015 in Theatre | Leave a comment 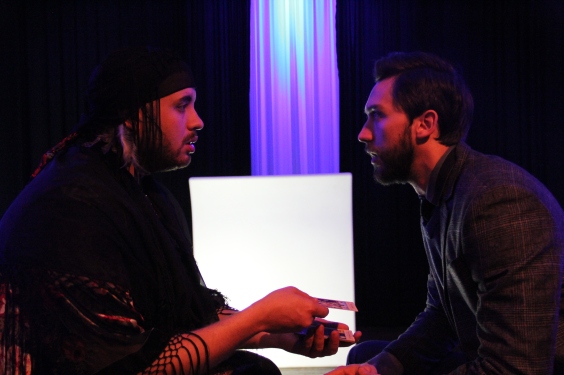 Every fear hides a wish.

Ok! In the interest of full disclosure, I need to confess to three things first up: 1. I loathe David Mamet, 2. I adore Two Peas, and three, I’ve had a fairly weighty glass of Shiraz to the tune of Ronnie Fosters ‘Two Headed Freap’, all of which absolve me of nothing, but may create a little context for my critical hysteria. With that dubious introduction I will state with great clarity that the very best thing about Edmond is the great performances and the very clever surreal direction of Glen Hamilton which rescues Mamet from his super-silly precipice of realism and plunges him into a netherworld that makes the play something very interesting and more aligned with the Two Peas philosophy of dipping us into the gutter of life. I have to say I find David Mamet’s supposedly self-reflexive ongoing expose on white liberals transparent and childish at best, embarrassingly ill-informed and naive at worst and his circular dialogue spineless rather than ambiguous. Of all his boorish plays, Edmond is possibly his worst (but then I haven’t seen all of them) and it is best served to a thinking Sydney audience with as much “David Mamet” cut out of it as possible. 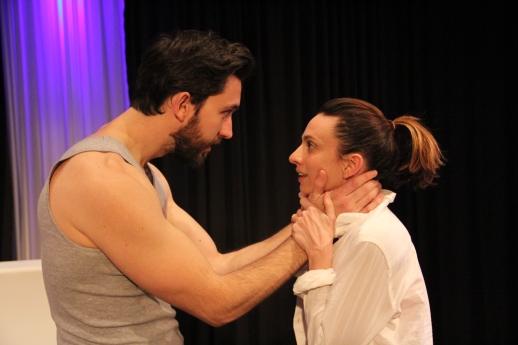 Two Peas do just this in several ways, the most important of which is by rotating all the characters around Edmond (the original play wants the wife to only play the wife, but Glen Hamilton cleverly subverts this) and by forming the building blocks of this society with white cubes that glow an eerie iridescent neon glow controlled by remotes in the actors hands – something very interesting considering Edmond’s all important descent into the seamier side of society is constructed by the characters he encounters. Without a doubt, the most interesting aspect of Edmond is the first visit to the fortune-teller that has him dramatically change his life, which subsequently causes his fall from grace amid his unpleasant true nature coming to the surface. This moment is bookended with the conversation Edmond has with his rapist at the end of the play, with whom Stockholm syndrome has placed him in a relationship, about what happens to us when we die and the nature of spirituality including everything from reincarnation and aliens through to the most fundamental spiritual beliefs about an afterlife. We’re never very sure what Mamet means by all this, but when Oleg Pupovac plays Edmond, we have a strong sense of the character permanently existing between heaven and earth in a kind of purgatory that virtually absolves him from his own inherent evil. It is the fortune-teller (wonderfully portrayed by Cheyne Fynn) who wakes Edmond up to this strange otherworldliness and Edmond’s actions that cement him there. 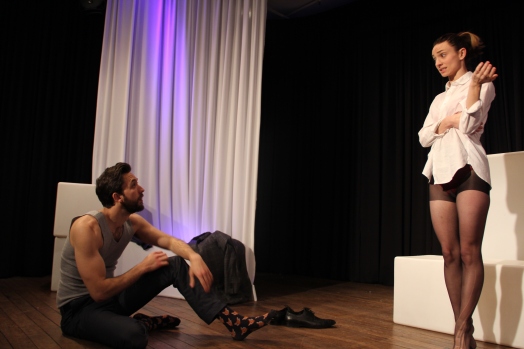 In the middle of all this, the play gets interesting, because one is never  entirely sure if we are witnessing Edmond’s journey into the night, a dream, or some fantasy concocted by him where he can speak his mind freely no matter how unpleasant his thoughts. It’s the latter scenario that seems to prevail in the small 505 theatre and as I said above, really rescues the play to a state of observation rather than engagement with its otherwise unpleasant protagonist. We get to see Edmond on the journey of his dark night that starts with the fortune-teller who informs him he is not where he belongs and subsequently sees him tossed about on an ocean of unpleasantness that is seemingly out of his control. It’s not difficult to argue that Edmond brings all his troubles upon himself, but the play is far more interesting when taken as a disconnect between nice white middle class society and the seamy underbelly that throbs beneath us. Edmond can only win by maintaining his facade, though his insistence that others equally drop their inauthentic act really boils down to Edmond preferring to label his perspective ‘truth’ and deny others’ exist – but the endless question of Edmond is do other perspectives exist anyway? 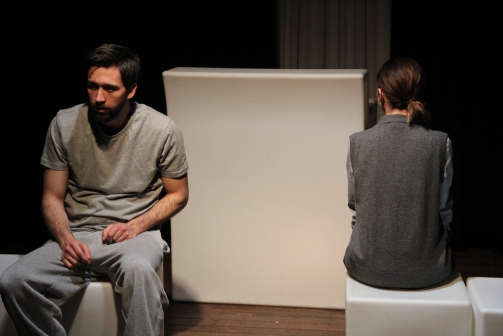 Oleg Pupovac is a great Edmond, whose large theatrical warmth manages to flesh out and make interesting the more complex aspects of the journey he portrays. This is particularly noticeable in the death scene that genuinely looks like an accident in the Two Peas offering, against for example the film, that makes it more deliberate. The ensemble who surround him by playing multiple roles (one of the aspects I really liked in the play) are Tara Clark, Cheyne Fynn and Naomi Livingstone, all on their game and all willing to become the unpleasant underworld that derails the psyche in Edmond.  Glen Hamilton uses his casts physicality against the role which equally works to highlight the surreal fantasy side of Edmond. Tegan Nichols keeps the sound relevant and Alex Holver is responsible for those cubes and the other lighting.

Edmond ends up being an unpleasant play that is well performed and interestingly rescued by a competent and committed team of creatives. If you are a David Mamet fan, Edmond is an absolute must. If you are not already a David Mamet fan, this version of Edmond is a great introduction to the play and much better than the film. A production that will give you a chance to think about this play in an expanded context that greatly enhances the original. 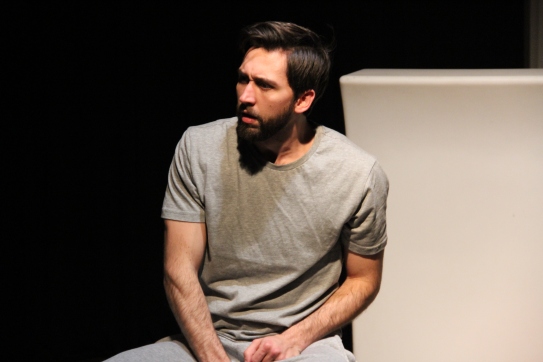 ← The Cherry Orchard – An old play about transition in a new theatre space. (Theatre review) ’71 – The eerie nature of the suburbs as a war zone. (Film review) →