The enormous and imposing image of Zoya, Ruben Guthrie’s estranged fiance, is plastered over the wall of his home acting as judge, pledge and talisman over the year of sobriety he promises her in exchange for reinstating their relationship. It is the pure sustaining of an identity through constant reference to an external representation, something Ruben Guthrie knows all about via his career in advertising, and Zoya through her career in modelling. Each reference the other and both emulate Sydney itself, a city built on the worlds most beautiful waterways that reflect the city’s image, evoking Narcissus staring into the pond. All this nothingness is sustained by the endless flow of alcohol; all this liquid used to hide the emotional currents of those who live in superficial Sydney.

It’s all very Fassbinder with mini homages to the great director peppered throughout Ruben Guthrie. Fassbinder’s play adapted to film, The Bitter Tears of Petra von Kant follows the antics of a woman turned model who has left her alcoholic husband in Sydney only to play power games with Petra, also an alcoholic. Ruben Guthrie is the play Brendan Cowell wrote and then made into a film, possibly following the great directors footsteps by writing the part of the alcoholic husband who remains in Sydney when his fiance leaves. The enormous image of Zoya encourages this link, and a connection to God’s of the Plague, Fassbinder’s story of one man redeemed from prison, struggling with his relationships as he tries to go straight. 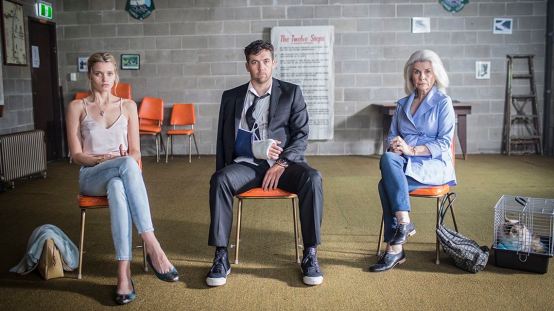 Like Rainer Werner Fassbinder, Brendan Cowell has an understated dark humour, and a remarkable talent for curving horror and terror into sly aphorism, writing so subtle it might get lost on international audiences. Ruben Guthrie is very funny, placing me in the embarrassing position where I was the loud laugher at my screening, giggling at what one might consider serious moments. But that lightness of touch is a Cowell trade mark and key to his success as a playwright. He’s brought that simplicity to Ruben Guthrie, and it has proven to translate well to the big screen coagulating with darker themes and ideas.

But one gets the impression Cowell is hampered by an Australian self-consciousness impacting on his direction. The perspective is straightforward as if he is conscious of “being a wanker” therefore pulling back from his own vision. The film shows a passion for art house peppered with the Australian desire to preference “entertainment” over “art” exemplified in the focus on advertising in the film. Artistic drive is tempered by a down-to-earth acknowledgment of an idealised working class aesthetic assumed to be uniquely Australian. Brendan Cowell seems aware of this as the highlights of his titular character (styled after his own self-imposed abstinence) attempts to express the deepest of his feelings are always cut off either by a well-meaning friend or by his female de jour. Let’s get back to selling the product shall we? After all, you’re a wanker if you aspire to more than this. This taps into the very real experience of the australian artist who wants to remain loyal to a culture that naturally excludes him. Where the European parents, and even our American cousins can praise and exalt their artists, Australians still refer to them in post cultural cringe judgement of being cash-worthy. An artist in Australia needs to make money, or what use are they? While Cowell has big ideas and strong ambitions, something (or someone) has insisted on a more mainstream approach to his subject and that perspective has flattened what was more accessible in the play.

Still, what remains strong and accurate is the portrayal of the Aussie drinking culture. Particularly distressing is a scene where Ruben (played by Patrick Brammall) is almost forced-fed alcohol by his co dependant mother (performed by Robin Nevin). One of the great strengths of Ruben Guthrie, besides the faux beauty of the false world, is his relationship with his parents (the other is the great Jack Thompson) and the frightening depiction of inter familial drunkenness. The image of his mother feeding him white wine as if it were breast milk is shocking, and a cinematic moment I will not soon forget. The similarly dark analysis of the Alcoholics Anonymous twelve-step program is powerful and provides a disturbing but fascinating insight into what the schedule imposes on its devotees.

All the performances are strong, with the only exception being Abby Lee’s odd Czech accent which is easy to forgive. Brendan Cowell can pull great performances from his cast who are well-chosen and include that edgy darkness that Cowell so successfully incorporates into all his projects. Ruben Guthrie is an Australian film to be proud of and a very interesting night at the cinema. 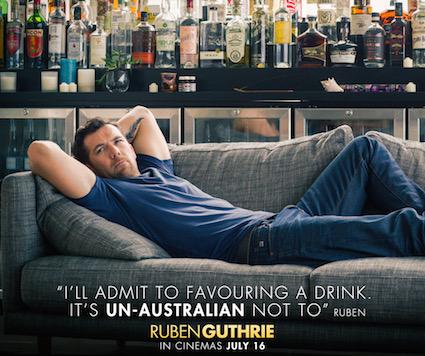