Posted by lisathatcher on June 29, 2015 in Film Reviews | Leave a comment

I published this review in 2014 on the 30th anniversary of The Terminator. Republishing now, due to the endless rise of the sequal…

The machines rose from the ashes of the nuclear fire. Their war to exterminate mankind had raged for decades, but the final battle would not be fought in the future. It would be fought here, in our present.

The story goes, that off the back of Piranha 2:the Spawning, James Cameron managed to land the chance to write two of the most important sequels of the 80’s, Aliens and Rambo: First Blood part 2. If’ you’ve been unlucky enough to see the sequel to Piranha, its difficult to understand how this came about;  it absolutely no doubt had something to do with his romantic attachment to woman-of-the-moment Gale Anne Hurd whose new but highly respected production company would give much needed credibility to Aliens and The Terminator, who he would then go on to marry in ’85. As it turns out, Sylvester Stallone decides he can’t trust Cameron and hijacks the Rambo film to his detriment, leaving Cameron with co-writing credits of dubious accomplishment. However, while James Cameron is working on Aliens and Rambo, he and Hurd (she has writing credits though he claims she contributed nothing, but he will be successfully sued in later years for stealing the story from Harlan Ellison, so his word has little credibility on that subject) come up with this little script about a creepy robot who comes back from the future to try to kill a woman who one day will become, not “just” the mother, but the defining creative force in fashioning the a great revolutionary of the future. The reason Sarah Connor must be killed is not just because she gives birth, but because she trains and teaches John Connor – that’s why the story doesn’t start with Terminator 2, being sent back in time just to kill the man when he is a kid. This premise will introduce us to a James Cameron “problem” that will be debated for years. Does he create feminist icons, or does he work into a deeper layer of misogyny?

The central premise of The Terminator (and not it’s squeal) is birth control rights and the obligation two anonymous men from the future feel inside themselves to interfere with the reproductive future of one Sarah Connor. This is even referenced by Doctor Silberman who jokes that the Terminator (you see that name in a whole new light now, right) is a kind of “retroactive abortion machine”. The Terminator, or the abortionist, is trying to terminate a pregnancy before it happens (a kind of super contraceptive) in order to prevent a Christ like figure from occurring. Sarah Connor herself says to Reese, “you better tell me something about John’s father so I don’t tell him to get lost when he turns up,” a signpost that women can’t always tell whose child they should and shouldn’t carry. What is at stake in the prevention of this contraceptive/abortion? Why the entire future of the human race of course. Sarah Connor must fulfill her duties as a mother if the human race is to survive, with no interruption. 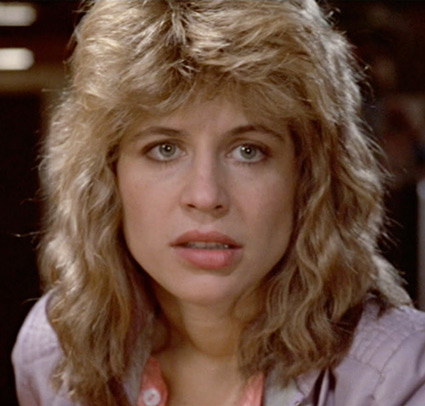 However, accompanying this image of the female as a reproductive machine that makes or doesn’t make babies according to the interests of the most powerful male, is the essential, iconic Linda Hamilton single mother who can raise the ultimate “man’s man” alone. Unlike Terminator 2, when she is regularly put in her place by males who have power over her (son, psychiatrist, good terminator, bad terminator) even though she looks more bad-ass than any of them, Sarah Connor becomes the revolutionary before our eyes in The Terminator, and of course, famously kills the machine herself in the end. It is true that she chooses life on behalf of her unborn (but now conceived) child, but she also becomes her own version of a killing machine, taking on the trappings of the masculine in order to raise the ultimate revolutionary. John Connor will never be a mummies boy – lets put it that way and the reason for this falls solely on the shoulders of his mother.

Still, there is no doubt that Cameron needs to turn powerful women into mothers, because he will get to and fix Ripley in the same way in Aliens. But equally, there is no doubt that the Sarah Connor character is an enormous break with the suspense/action film trope of the helpless female. Linda Hamilton is never subjected to the male gaze; even when we see her breasts in the love making scene, the shot is sentimentalised, not sexualised. Her image will change famously in the second film, as will her performance, which is still outstanding in the first, too often eclipsed by the iconic Schwarzenegger robot (one of my favorite things about terminator is his pure ARYAN GERMAN human experiment – I know he’s actually Austrian, but you get my drift here – no accent changes for Arnie) and Michael Biehn’s fabulously wily Kyle Reese. Sarah Connor is never an ordinary girl: She rides a 1984 Honda Scooter on the footpath, when she is stood up by her boyfriend (who owns a Porsche) she doesn’t stay home and sulk but takes herself out for movies and dinner, she has a pet iguana, she works out she is third in the phone book before the cops, she is clever enough to ask “why me” very early on, and she gets her shit together fast when under pressure. Cameron and Hurd give us a really interesting woman right from the get-go, in whom we see the revolutionary figure immediately. Sarah Connor is enormously popular with women, and there is no doubt that she broke the mold for us in terms of what we can look forward to at the movies.

Despite all of the above, like so many people, I still love this film, and am still blown away by its cleverness thirty years on. The war with machines is beautiful signposted, with machines both assisting humans and getting in the way in almost every scene – from the answering machine that gives away Sarah’s location and Gingers headphones that prevent her escape from danger, through to the garbage disposal unit controlled by the human taking out the trash when Schwarzenegger first turns up, machines are right along side humans, helping and hindering progress – and they’re not computers (except for the future machine himself). It’s an impeccable manifesto on our relationship with technology, a daily lament being “And these are supposed to make our lives easier!” all summed up in the perfectly named dance club Tech Noir. Besides this, the self referencing is seamless and immaculate – Sarah’s co worker ironically claiming “in one hundred years, whose gonna care?”, the Terminator’s parking on top of the blue truck, Sarah’s voice on the answering machine stating “Hi!… fooled you, you’re actually talking to a machine,” just to name a few. Even the police car Reece steals says “To care and to protect” on the side rather than using the word “serve”. The film is a master class in action suspense, it being a full thirty minutes in before we know who is good and who is bad and what the hell is going on anyway. It is a flawless example of economy of scale, something Cameron will not be famous for in the future, with every word, every scene, every second of the entire film being necessary, driven by the narrative arc, and the overarching primary perspectives. If the sci fi special effects look a little dated today, eternal is Stan Winston’s epochal endoskeleton that still packs that punch when the now rubbery flesh is removed with that scalpel in that small hotel room. Above all Brad Fiedel’s incredible score – it’s worth watching this film again for that alone – with its thumping, heart beat bass pushing the film along under the wobbly synthy creepy almost melodies. The gut-punching solitary drone of the futuristic machine music, as ominous as can be, haunting those grader travels over the top of skulls is where all the power in those scenes lie, as becomes obvious when the dated special effects are just as frightening as ever.

The Terminator is such a good film, such a flawless, perfect example of its genre that it did the impossible, and obliterated James Cameron’s woeful first efforts in the no-longer-to-be-mentioned Piranha film. There’s not a lot of films that have the power to redeem a very new, very hopeless director, but The Terminator catapulted Cameron out of his failure into the land of the giants.