Home » Articles » Articles at The Essential – An analysis of the adaptation of Henry and June (book) to the Kaufman film. (Article) 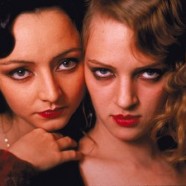 Articles at The Essential – An analysis of the adaptation of Henry and June (book) to the Kaufman film. (Article)

Posted by lisathatcher on May 31, 2015 in Articles | Leave a comment

It’s been published over at The Essential.

Film director Philip Kaufman came under some criticism for bringing the film Henry & June to the big screen after his enormous successes with films such as The Unbearable Lightness of Being, The Right Stuff,The Outlaw Josey Wales (screenwriter) Raiders of the Lost Ark (screenwriter) and Invasion of the Body Snatchers. Of all the criticisms from critics, the most consistent regarded making a film about writer Henry Miller from the point of view of Anaïs Nin. Never mind that Nin’s book is titled Henry & June, or that the film was a profound labor of love for an (at the time) under-recognised female artist who created a truly beautiful work of art out of her relationship with her lover Miller (something Miller did himself at the same time about his wife); it was annoying that the cool, straightforward masculine voice of Henry Miller was engulfed in all that feminine watery flounce that embarrassingly appropriated the talents of the writer into the existence of his muse. For up until Kaufman’s film, Anaïs Nin was more famous for being Henry Miller’s muse, one of his first publishers and a benefactor of sorts. It is easily argued that the faithful adaptation of the book into the film has assisted in the awareness of Nin and her as yet under-developed critical attention.

There is little critical analysis of Anaïs Nin, but it would not be difficult to argue her influence on women and on female writers far exceeds the reach of Henry Miller, and all the beat writers combined. The rise of erotic romance owes a great deal of its success to Nin’s profound ability to take the feminine mystique and empower it into self-expression. As a feminist, Nin was deeply aware of the cage femininity provided women, and within its bounds she rallied against it, using its tropes as a voice for female assertion. She never apologized for imposing it on her life as a form of narcissism and indulgent constant self-creation. She was a brilliant woman, remarkably under-recognized, whose life was a profound commitment to a female phrase.

You can read the rest of the article here.

← Song One – The music of our united isolation. (film review) Articles at The Essential – My take on “The Rock” at San Andreas. (Film Review) →