“We are made to need other people, we have no choice, yet we don’t know how to be with them. Not safely.” (From The bitter tears of Petra Von Kant, Play by Fassbinder)

To imagine Clouds Of Sils Maria is a film about aging and the way an older actress might see herself reflected in the younger woman, is a banal and tired judgement that misses Assayas point; time is an arbitrary thing and even the so called documents of time – that fearsome monster we all imagine is recording our every move, the internet – cannot be trusted to tell all versions of truth. The vehicle for subterranean meaning in Sils Maria is definitely Maria Enders (Juliette Binoche) confrontation with age as exemplified in her taking the role of a weaker, older woman in a play made famous by herself playing the younger powerful woman at the start of her career, but to critically approach the film as if it were “only” about this then insist that the film be divided into three sections that have little to do with each other, consumed by plot holes and stilted narrative flow, become criticisms of a film maker who is far too good to be making those kinds of problems. Given the already existing difficulty audiences (both critical and lay) have with perspective when complex female relationships are presented, Assayas has taken a great risk (perhaps it is not so great in France) in detailing a relationship that is frankly, almost completely impossible to access unless you have lived it, which of course almost everyone over forty has.

The questions become, what is Sils Maria really about, what is Assayas trying to say to an audience who erroneously expects older women to be struggling with their age, and how do we get over ourselves enough to let the clouds of perception to roll in and out again as we bear witness? 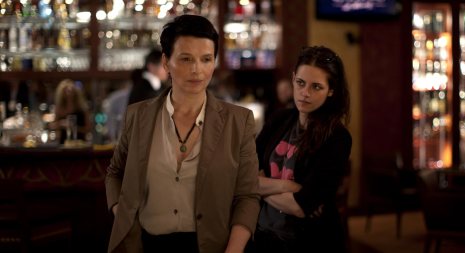 Heading back down the tunnel to influence holds some of the key to the subterranean points of Sils Maria. It helps to know about the influence of Fassbinder’s films on Assayas, particularly Beware of a Holy Whore which profoundly impacts the film, but also The bitter Tears of Petra Von Kant, a film based on Fassbinder’s own play of the same name, and which Assayas loosely re-wrote in a simpler version so as not to impose itself too strongly on the primary narrative. Include in this the influence of Bergman on Clouds of Sils Maria, and you have a film that evokes a potent commentary on the power age has over youth, not only financially, but in experiential terms, particularly when examined through the lens of memory and maturity. Given this access, one can see subtle shifts of power away from the two younger women influencing Maria’s life back toward Maria, as her experience, her self-awareness and her grasp on reality outweigh the promise that youth and beauty claims to make. The final scenes, when Maria sees flaws in Jo-Ann’s (Chloë Grace Moretz) performance and offers assistance that the younger woman ruefully mistakes as weakness, is flawlessly captures the moment of awareness and we know that Maria has found the access to Helena that she had been struggling for. Access that the younger women around her could not help her find, because they don’t know it exists.

Seen through this lens, the film becomes a masterpiece of relationship intricacy both exposed and hidden that the three central women fall into but co-create through the lens of their experience, which is greatly weighted in Maria’s favour. Assays pulls superb performances from his three leads, subtle, yet chilling and precise. The back and forth between Maria and Valentine (Kristen Stewart) is precisely wreathed with its threats of bursting into something destructive constantly subverted by politesse and a genuine care for the other. The sexual tension between the pair is flawlessly portrayed, as if the male gaze were constantly imposing itself on their relationship, and their perpetual battle to thwart it – something as a woman I understood immediately – that might appear as a clumsy attempt to impose “lesbian” over a stilted narrative to a perspective itself immersed in the male gaze, is a brilliant piece of reflexive film making.

The film beautifully encapsulates the problems of being a heterosexual female immersed in the struggle to be fully realised in a constructed world that works against her. The male gaze is so strongly evoked between the three women, it occurs almost as a character of its own, or rather Assayas has the intelligence to work his own direction against the very brilliant performances. In this interview he claims to have stepped back and allowed Stewart and Binoche to work together within their roles, sometimes letting takes run for as long as seven minutes. In these scenes, a great subtlety thrives beneath the imposing structure and the bulk of the story is conveyed through eye movement, sighs, grunts of frustration and the small turning away from the other. this is the language of female battles and while a man might wonder at Valentines shocking departure, a woman understands precisely why she left. I may be crediting Assays with too much insight – if that is the case, it is remains to his credit that he recognised what lay in the performance of his brilliant actresses.

As Valentine claims, “The text is like an object. Its going to change perspective depending on where you’re standing.” So Clouds of Sils Maria becomes a study in perspective, a film whose emotional entanglements are so mosaic they come very close to the real and enormously interesting question of how it is to be a woman. Combine this with excellent performances from its cast (I happen to think Kristen Stewart was already a very good actress, so what she does here wasn’t a surprise to me – but she does well against the great Binoche) particularly Juliette Binoche who plays against the prevailing white hetro male perspective and is therefore doomed to have the deeper nuances of her performance missed. She is always an imposing and masterful presence, and Assayas takes full advantage of all that she brings.

Clouds of Sils Maria is a standout on the (so far) depressingly dull 2015 calendar and a film you can watch many times over.