Posted by lisathatcher on May 5, 2015 in Theatre | Leave a comment

ATYP – The State Library of NSW

“Isn’t it marvelous what a man can put up with and yet be happy.”

We hear all the time, in the many attempts to bring us closer to the heart and soul of the young Australian soldier on the shores of Gallipoli about boys forced to become men in the blink of an eye, and yet through Ross Mueller vision and his intuitive connection with the diaries and letters he used to write this play, we see another possible perspective.  The larrikinism Australian’s are so famous for can be seen as a refusal to become a man, a small quiet revolution against the weighty of notion of “hero”. When the ANZACs left our shores for war, they understood less of what was before them than we might know today – they had no television, no internet, no international newspapers, not even many immigrant neighbors who might be offering an alternate perspective to the propaganda ridden message of the homeland – only that each and every boy goes to war to become a man and a hero and to hold his head up high when he returns home. While Ross Mueller retains the dignity and respect due to the many young men who wrote about their experience in the war, he is unafraid to move into territory previously only known to those who ventured into the State Library to read the documents for themselves. By bringing the very words of these young men to life, spoken by appropriately talented performers, a new access to their inner world is given to the audience, that leaves one breathless with an intimacy previously unavailable. 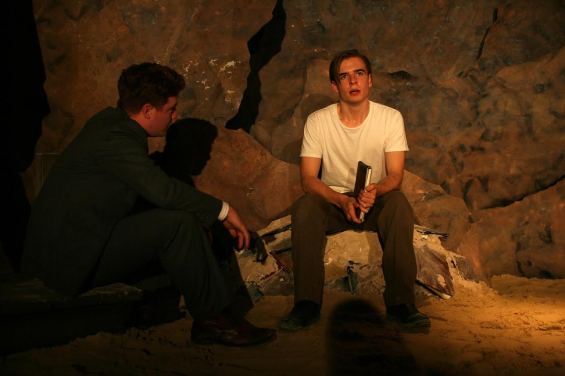 The story is familiar, so Mueller laces the play with back and forth movement through time and history – first we see a young man jokingly preparing with his friends for war, next we see him maimed, serious and troubled in a doctor’s office frustratingly dealing with a professional who can’t possibly understand him. If this was a time when little information about their future experience was available, then that is also true for the professionals assigned to assist them on their return. Include in that mix, the lack of empathy and scientific knowledge about the emotional and mental problems war can cause, and you have a complex cocktail of misunderstandings that are reinterpreted as heroic escapades, offered as a strange reward to a deeply wounded psyche desperate only for a true and honest listener. It is this fascinating and heart wrenching problem that Mueller taps into, by taking a bunch of documents and forging real characters, who tell their story in the words they chose, in a time that hardly understood them. A Town Named War Boy isn’t only a play using the words of those we’ve lost to war and time, it is a gift, and offer after all these years of an open and honest listener with a world of new knowledge through which to embrace these story tellers. One has the very powerful experience of catharsis while hearing these young men open up their hearts to the joys, the horrors, the fears and most of all the effect on the self that war can be. We can’t give the true gift of listening to them in person, but we can hear them with more clarity one hundred years on than might have ever been possible before.

This is the level of connection Mueller injects into his construction from the original texts, an intimacy further enhanced through the direction of Fraser Corfield and the striking, close performances he brings out in his cast of four young men. Joshua Brennan (M.Rock – ATYP & STC, Parers War – ABC1), Simon Croker (Dead Man Walking – State Theatre), Brandon McClelland (Suddenly Last Summer – STC, ANZAC Girls – ABC1, 2015 Most Outstanding Newcomer TV Week Logie Nominee) and Edward McKenna (Actors Centre 2014) are all confident in their difficult roles, each bringing a different take on the ANZAC hero to life, while remaining true to the  transformative power of Meullers text. All four actors, and Corfield himself seem to be conscious of the difficulty in telling a story that has been told so many times before, and yet so rarely with the weight and impact of immediate experience this play brings. Separating the ANZAC from the legend is a difficult task, laced with ones own internal battle to balance an aware sympathy with admiration and respect for valor. These young men have the confidence in their performance and in the text required to guide the audience through all the various journeys with respect and empathy.

Add to this, Adrienn Lord’s powerful set that manages to encompass both immediacy and passing years and the strong sound and light work of Alistair Wallace and Emma Lockhart-Wilson, and you have a sensory experience of being close to the action they speak of, while successfully incorporating the physical distances of time and geography. So much care and respect has gone into this production, at every level, the source material and subject matter handled with grace and that adventurous creative eye that we so want from our artists, that it becomes the defining work to bring the individual as close as possible to the extraordinary experience of these very beautifully ordinary young men.