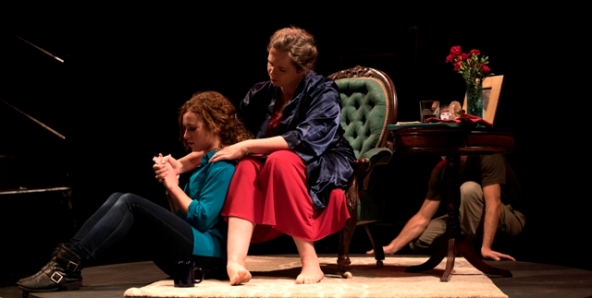 PACT theatre from 23 April to 2 May. You can grab your tickets here.

Just when I was starting to despair that I was seeing too few truly exciting theatrical productions in Sydney in 2015, along comes Théâtre Excentrique’s interpretation of Antigone (pronounced ‘on-tee-gone’ when the Anouilh version is on the stage) pulsing with cheeky wit, clever observations about our current political situation and room filled with loud, gloriously enthusiastic young actresses. This production is more than a breath of fresh air, it is that (all too currently rare) exciting manifestation of true artistic integrity, that on the stage has the remarkable ability to overcome any aesthetic obstacles – not that there are many to be had in this lovely production. Anna Jahjah has directed this Anouilh version of Antigone with a mature connection to the writer and what he intended with this play, written at a specific time of great trouble in France. Anouilh delivers a subversive message about the dangers of political compliance – a message crucial to thinking Australian’s in 2015 – and he delivers it in a pitched verbal battle between a spirited, defiant princess and her reasoned, articulate, far too convincing uncle the King. Jahjah understands this play very well, seeing herself in the young spirited woman, but also exhibiting a great deal of sympathy for a King who feels that great political acts are beyond his grasp and he would do better to keep the status quo, make sure the money flows free and that turmoil is as absent as possible. Sound familiar? 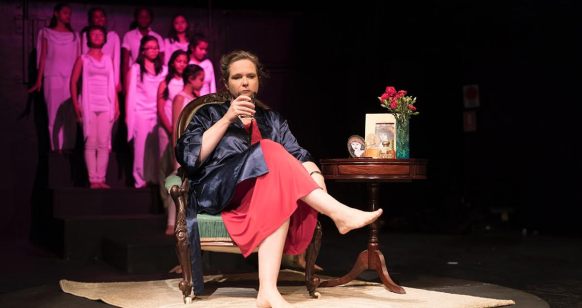 So much thought has gone into this production, so many details attended to, so much devotion to the multi-layered vision of Jahjah without compromise, that it is one of the many pleasures to fall into the play entirely – something so difficult to achieve with a well-worn text. It starts with an all girl Greek Chorus speaking only in French, clad in white, multicultural daughters, all from Blacktown Girls High School, beautifully representing the transitional space of time and culture whose layers bless the writing and all the interpretations of it. Kristy Jordan interprets for the mono lingual, but there is barely a need, as the message the girls impart, at every manifestation, couldn’t be clearer. Jordan is our host and our guide, her strong, enthusiastic performance impossible to resist. She is a potent presence, but the power of the production lies with Ellen Williams as Antigone. This is one of the best performances I’ve seen this year, as Jahjah directs Williams to a perfect combination of youthful defiance and a strange rudderless wisdom that has yet to find its foundations, but is clung to nonetheless. It’s a striking performance revealing to the audience that defiance is not always stubbornness and courage is not always ignorance.

Pitted against the unsettling gentle reassurances of Neil Modra as Creon, one is left with a deeply personal message that becomes frighteningly contemporary. At first, Modra can seem too insipid, too gently caring to be the King of Thebes, but Jahjah knows precisely what she is doing when she isolates the character, and supports Modra as he lifts Creon out of Thebes and places him in our metaphorical living room. We are not offered the reassuring distance a more commanding performance would have provided, and so we are delightfully condemned to seeing ourselves in Antigone fighting against a much-loved parent and worse, mirrored in Creon who knows how to make a success of a mindlessly ruthless day, in our very disturbing modern world. It’s a clever turn of an unfriendly card by Jahjah who has taken us too deep to escape once consciousness overwhelms us. With the audience split down the middle by the river of a stage, the Greek Chorus urging Antigone on in her wayward integrity, a rather shocking version of modern life is presented as we realise to be true to ourselves means we will almost never be understood and rewarded.

The staging is its own delight, as Gerry Sont (who also plays a great comic relief) has constructed a mini stage on wheels, a large wheel in itself, that spins and turns with the narrative flow, adding to the overall daunting knowing that time and culture move, but some things remain stubbornly the same. We watch, constantly engaged with the gentle flowing evolution that like a soft whirlpool erodes our expectations and replaces them with the pleasurable surprise truly good theatre can impart. Over the top of the production resides Roslyn Blake as the tragic Eurydice, knitting her blood-red wool, watching in a deathly feminine silence that has only one possible outcome. The PACT theatre is always an imposing presence with its strange balconies, its unique vantage points and its pitch blackness, and this great space is used to full advantage in delivering this rather shocking message. Staging is well aided by Larry Kelly’s lighting and Yvonne Hocothee’s costume design that each in its way, contributes to the remarkable sense of timelessness this production manifests.

Part of the packed punch of this production of Antigone lies in the translation by Kris Shalvey and Anna Jahjah such that the play moves carefully under the control of its talented director. This is exciting theatre, beautifully brought to life under great direction with a very talented group of cast and creatives who have insisted on excellence at every turn, and taken risks for no other reason than to appeal to those of us so willing to inspired by great art. Consciousness is such a rare thing anyway, it should be grasped and appreciated when it appears.

Antigone is only at the PACT until 2 May. Make sure you get a chance to see it. Highly reccommended.