Posted by lisathatcher on March 19, 2015 in Theatre | Leave a comment 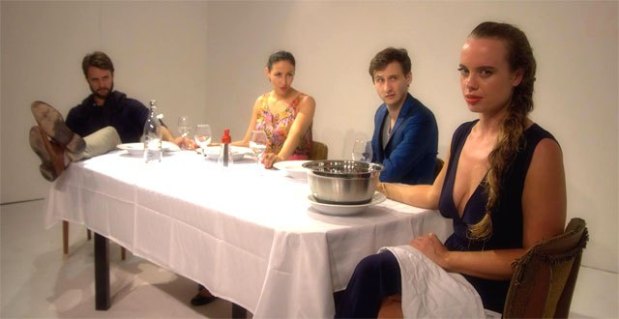 John Patrick Shanley is definitely a romantic. His heroes always have to perform a grand sweeping gesture that involves some sort of love connection to resolve the problem a residue of build up from the difficulties life sludged over their psyches. His heroes are often maimed, but at the very least, tortured inside. It is the grand sweeping act of love, that almost always counters societal expectations (to which he has been unsuccessfully conforming) that will transform him from the inept confused bag of attempts at “masculinity” he manifested previously. No where is this philosophy as perfectly manifest as in The Big Funk, where Shanley’s hero is an artist on a kind of hunt for himself and his heroine is a woman who literally allows herself to be covered in grease (the sludge of human existence) by abusive males who resemble her father. While The Big Funk can be very obtuse, it is also one of Shanley’s most direct plays, where metaphor becomes a direct action.

This contains its own message. As Joe in Joe V’s The Volcano had to walk out of his life in order to reveal something previously hidden, so Austin and Jill take actions that become a soothing balm on internal strife. Jill’s father used to smear butter on her (!) and so now she is attracted to males who treat her poorly and cover her in oily condiments. “Grease is not love” are the words Austin will say to her that change her life. How does he know? Because when he found her in a cafe, covered in Vaseline after a particularly nasty encounter, he takes her home and without seduction, gives her a large bath washing her clean. It’s all very John the Baptist, as Jill will in turn become Austin’s saviour when he also removes his clothes before her as a declaration of vulnerability and his own attempt at re-birth (all before a mirror).

Against the metaphorical re-birthing to which Austin and Jill are subjecting each other, is the very real new birth happening to Omar and Fifi. Omar throws knives for a living, and tosses metaphorical barbs as a hobby. Fifi is a loving, supportive wife, but there is a cost attached to so much loving attention, as Omar finds out when his wife declares she’s pregnant with twins who “will be born tomorrow.” If Austen and Jill discover themselves in a rebirth they actively pursued, Omar finds himself embroiled in the birthing he didn’t want to face. 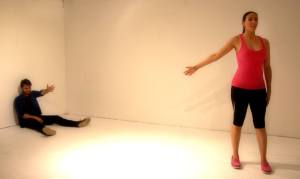 But the real magic of The Big Funk, and the reason it was such a natural fit for director Michael Dean, is its theatrical odes that hearken back to the classical. There is a greek chorus style of monologue delivered as characters have their moments of imparting great wisdom to the audience. This is always tongue-in-cheek, but these speeches don’t occur as preachy moments from fourth wall breaking characters, but rather as accompanying the overall story line. Annabel Blackman has designed a minimalist set into which props are moved back and forth, very much along the lines of a turn of the century Von Trier film. The walls are white with red lines on the floor sometimes representing where a prop is to be placed, other times symbolising movement, for example following the route of Omar’s knives. Shanley is famous for his human-as-the-universe characters, and on such a set with such a director, each of the characters expands into the philosophy they represent. Where Shanley is in great danger of pretentiousness with this play, in Michael Dean’s hands his intentions are perfectly expressed and instead he comes across as exuberant, firing a unique lust for life. 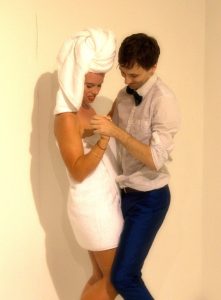 Over the top of all this is a beautifully performed production, with great music – some of it Shanley’s, some of it Dean’s (the bath scene is lovingly enfolded in the coos of Astrud Gilberto while a funny scene of men preparing for a big night is ironically enhanced with Queen’s ‘Don’t stop Me Now’) – that does great justice to its OTT material. Alixandra Kupcik is Jill, a complex mix of the very funny and rather tragic but always hyper aware modern woman, complicit in her attacks but never at fault. Kupcik has a very commanding stage presence from which she sources an inner strength for Jill, making a very interesting statement about what essentially is an abused woman, in a way rescuing the character from what can be seen as a sly judgement on the part of Shanley.

Jasper Garner-Gore carries the weight of the plays philosophies as Austin keeping it light when in danger of moving toward pretension yet adding gravitas when the flavour is in danger of getting frivolous. He does a great job with the infamous bath scene, giving it a charming modern touch if it threatens to get a little sleazy. He literally mirrors this scene at his own catharsis later, managing to keep Shanley’s point the prevailing experience when a lot is happening. Jess Loudon is Fifi, a charming caricature of the compliant housewife. Loudon plays an overly sweet Fifi, having a great deal of fun with the irony inherent in the character. Again, if Shanley might draw his females a little thin, these actors have a great capacity to make something deeper and more interesting of their roles, and a particular high point in the production is when the women have a very slight, but intense stand off at dinner. Michael Drysdale works well with a difficult Shanley character whose refusal to accept his wife’s pregnancy threatens to make Omar a little outdated, but Drysdale covers this well, giving off the idea he really loves his wife and can rejoice in his situation.

Bali Padda makes a brief appearance, but it is as a man who smears a woman with grease, so understandably, it packs a punch.
You only have a few nights left to catch The Big Funk.
Make sure you do.