10 March to 11 April Old Fitz Theatre – You can grab your tickets here.

The Australian gothic has a rich, yet still under explored history in our countries artistic culture, usually recognisable in films from the 1970’s forward, and these days more likely to punctuate more popular genres like horror or bizarre/absurdist terror than it is examined in its own right. It’s difficult to pin down what makes the depiction of Australian gothic so unique, suffice to say we know it when we see it, and it is very Australian. Peter Weir is one of the first film makers to bring Australian gothic forward as a specific genre (think of films such as Picnic at Hanging Rock – 1975 and The Cars That Ate Paris – 1974) along with film makers like Nicholas Roeg (Walkabout – 1971). But the Australian gothic was being explored by playwrights earlier than this, particularly Patrick White in his plays, as well as in his play/screenplay The Night, The Prowler.

There can’t be any doubt Marshal Napier has many of these films and plays in mind when he wrote Freak Winds, because he includes many of the basic elements of Australian gothic, creating an exploratory mish-mash of slices of Australian gothic film and literature, particularly from Peter Weir’s Homesdale (1971), Ken Hannam’s Summersfield and Weir’s The Plumber. Each film deals with visitors to the home and the home as a fortress that betrays its occupants by either being dangerous when they thought it was safe, or an innocent lair used to capture victims. Each uses long drawn out plots where psychological rather than supernatural forces are prime movers ensuring protagonists are neither sure of their neighbour nor themselves. However, what makes the style of gothic used by Napier in Freak Winds so intrinsically Australian, is the perversion of the mundane as what ought to remain hidden has come to light. A familiar cultural environment is used to enhance the dark and pathological nature of both the setting and the characters. Napier’s beautifully written and yet excruciatingly drawn out journey toward his protagonists fate is as much about the normal circumstances that drew him to it, as it is about the event we all anticipate. First written in 1999, the play would have been thrilling enough to see, but revived in 2015 (and starring Napier himself) gives the play a gravitas that highlights the history of the genre particularly when we are so far in time from this style of Australian film and theatre.

And Marshal Napier is a true and passionate fan of Australian gothic, so the homage is accurate (for want of a better word) and imbued with a piercing loyalty. None of the three characters talk about Australia, but the country is there, in the intense freak southerly buster that almost seems to work in tandem with the sinister intentions of web spinners Ernest and Myra. Australians know about freak winds in a way no other country experiences, and it is the wild Australian weather that captures Harry Crumb and deposits him like a fly in the tangleweb of his very peculiar hosts. As soon as Harry knows he is trapped (early in the play) Napier plays with his prey as if he were one of the staff at Homesdale, every strange conversation, every deeper experience of fear dragging Harry closer to his real self. For an audience sanitized by horror films and rapid CGI, the mental torture carries all the more weight and poignancy as over and over we wonder why Ernest and Myra are “playing with their food,” so to speak. Napier imbues the dialogue with a surreal absurdist comic touch that lightens the pounding march toward the inevitable. 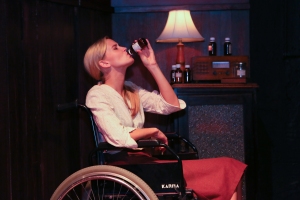 For fans of the genre (as I clearly am) this night at the theatre is a real treat. If you know and love the films and plays I’ve mentioned, you will have a wonderful time at Freak Winds, and if you don’t – go anyway. Napier is sporting an injury, and so the reliance on a walking frame is a new addition, but it works splendidly adjacent to Myra (Anna Bamford) who is confined to a wheelchair. Bamford uses her lovely looks to great effect, easily convincing the audience she is Ernst and Harry’s saviour, and then their enemy each in turn. Her looks are used constantly against audience reaction and expectation, particularly when she suddenly appears in a school girl uniform. Napier himself as Ernest is a commanding presence, flawlessly vacillating between friend and foe as he meticulously unravels Harry’s psyche. Harry is played by Ben O’Toole, very much in a contemporary style, almost as if he is an audience member himself, speaking for our confusion and being too polite when his senses tell him he’s in danger.

Environment is essential to the Australian gothic aesthetic (think of the girls school in Hanging Rock, the Hunting Lodge in Homesdale and Sofala in The Cars That Ate Paris) so Freak Winds places great emphasis on set. Lisa Mimmocchi has designed a moldy red basement home for Ernst and Myra complete with rotting floor boards and dusty windows that enhance the raging lightning storm outside. The set is bold and large and like many of the plays performed at this venue, incorporate the entrance point spliced between the audience as part of the set. Freak Winds is a longish play, but it makes vibrant and exciting use of the theatre, adding to the already strong sense of suspense the play naturally evokes, and keeping the visual connection to narrative consistent.

Freak Winds is a fantastic opportunity to see a great Australian play, performed and directed by the writer, who really understands a unique and potent genre. Don’t miss it. 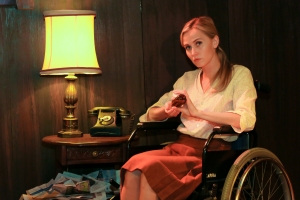