Posted by lisathatcher on March 3, 2015 in Theatre | Leave a comment

“When I was most unhappy I lashed out rather than whined.”

Given the profound difficulties all women have in Hollywood these days, it’s very hard to understand how Bette Davis secured the success, choices and freedoms she did for the fifty or so years she reigned as a Hollywood legend. For the most part, the story seems to be one of catching them with their pants down, as Davis used her considerable wit and talent to take advantage of the distraction the movement to talkies was creating, and worked out very early that making money for the studios was the way to get hired. There is no doubt that she fought hard for every break, that she was a commanding presence that refused to be crushed and that she moved passionately forward when she was constantly accused of the most anti-feminine behaviours, but even so, many women in Hollywood have these skills and they are not tolerated in the way Bette Davis was. Still, she encountered all the usual dismissals in her early days, told she wasn’t beautiful enough, sexy enough, and that she was trying to seduce the director when she wore an ill-fitting costume that fell a little too low in the chest. None of this stopped her, none of it tainted her opinion of herself and when her first few opportunities came to nothing because of her poor performance, she worked harder, finally taking her big break by the balls (so to speak) when it did arrive. Bette Davis was painfully aware of misogyny, she just didn’t let it affect her opinion about herself.

Now, in an astonishing performance that captures Bette Davis as both a trail blazer and an astoundingly intelligent human being, Jeanette Cronin brings the woman to life after the success of manifesting Bette in the Ensemble theatres Dark Voyager in 2014. Not only does Cronin look remarkably like Bette Davis but she embodies her to the extent that a deeply complicated version of the screen goddess emerges, truly making the one hour show seem like an intimate tete-a-tete with the woman usually kept at such a profound distance by the screens frame, and time itself. The old 505 Theatre has seen fit to locate this monologue at Gay Mardi Gras time, which is a great idea, but to be honest, the actress needs this sort of impassioned revival outside of those boundaries as well. Cronin offers us a Bette Davis that is a reflection of herself, a woman incapable of being restrained, as in love with the female dark side as she was bored with the feminine mystique. She performs alone on the stage, but the room is decorated with the paraphernalia of image, including costumes, carefully positioned lighting and a large dressing table and mirror that reflects the audience back against the themselves. As Cronin becomes Bette in Queen Bette, she tells us about a life when a woman remarkably lived exactly as she wanted. 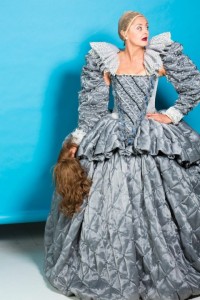 Peter Mountford is a director with a strong eye for movement. Cleverly, much of the way Bette Davis’ determination is captured by Cronin is the result of her physicality, strides, deft pauses, attempts to commandeer the audience with the sharp turn and that always existent commanding presence. We see Bette Davis as strong-willed and in forward motion, not running from something, or haunted by fear. Mountford is aware of the accusations against her, and he includes them as misinterpretations; where we imaged there to be anger, we see a cheerful refusal to comply, where we imagine her to indifferent we see a passion interpreted through objects. Mountford and Cronin’s Queen Bette is not cold, distanced or bitter. She is aggressively seeking, as though her nerve endings smoulder, the intelligent spark in her eye fueling her bodies actions. Cronin uses the entire stage, striding from here to there, as enormously comfortable with the intimacy of theatre as she is with the movement of the camera. Bette Davis was always about eyes. Those of the beholder, those of the camera, those of the audience and of course, her own. Mountford and Cronin create a Davis who never stoops to court the watcher, but who commands the perpetual gaze nonetheless.

The 2015 Mardi Gras season has produced some wonderful works that experiment with ideas that develop beyond the heteronormative response to ‘gay-ness’ and Queen Bette is another contribution to more facets of what it means to be GLBT in a predominately hetro-enfored society. Bette Davis has been appropriated as a gay icon, and with a performance like Queen Bette it is easy to understand why she is so loved by the outsider. Whether you go to get closer to this important and interesting female, or to see Cronin’s astonishing performance and manifestation, just make sure you go. This is a night you won’t forget in a hurry.

“The real female should be partly male and the real male should be partly female anyway. So if you ever run into that in either sex, you run into something very very fine I think… There is a new sex starting, I think. There is neither man nor woman. It’s a very independent male creature that lives alone. And a lot of independent females who live alone as well. It’s very sad, but its much easier for both sexes to do it this way nowadays… this is the way the world is going. There’s no question about it.” 1963 Interview.