Home » Theatre » Cock – What are relationships for? (Theatre review) 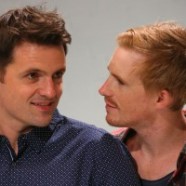 Cock – What are relationships for? (Theatre review)

Posted by lisathatcher on February 17, 2015 in Theatre | Leave a comment

Feminists and the gay community have been at odds for decades over the question of nature v’s nurture. It is essential to the feminist oeuvre that women are made not born and it is equally essential to the GLBT political position that gay is born not made, and the two are battling, all too often, for the same territory as patriarchy and its dictates continue to demand people conform to its emotional needs. In Cock there is really only one reason John has to choose at all – because patriarchy along-side heteronormativity are insisting on certain conditions in order to bestow their powerful acknowledgement of relationship, an acknowledgement that in the case of all of the protagonists, may result in a peaceful life – depending of course on the irrational whims of patriarchy, which holds all the political, legislative and societal power.

John is in an emotionally abusive relationship with his male lover, that reeks of a co-dependence rather than the attack of a vicious human over another. Right from scene one, we see that John accepts the infantilism with his own petty anemic barbs. The men are trapped. Trapped by their love for one another and trapped by their inability to reignite a spark that gives them a reason to be together. When John takes the initiative and leaves, he finds himself attracted to, of all things, a woman and suddenly becomes embroiled in a mess of politically charged sexual labels and an insistence that he choose between the two humans before him, both of whom want a monogamous relationship.

But John is forced by his own desire for monogamy, and interestingly his choices comes down to a political direction as he could equally settle for either partner and be equally as miserable with both. Mike Bartlett writes John as a man driven into emotional manipulation by the complexity of his choice. Unthinkably he forces his two love interests into a dinner party by lying to both – an act I found reprehensible (and frankly one that would turn me off John for life)  – but the point remains that John looks more and more anemic, smarmy and unconsciously calculating because he simply doesn’t have the maturity and life experience to deal with the difficult problem before him – one that heteronormativity refuses and pretends doesn’t exist in its own infantile oversimplifications.

Mike Bartlett has provided us with a wonderful play, very contemporary in its subject matter, and a particularly brave choice for Red Line Theatre Company to put on at Mardi Gras (a choice I applaud) even if it is a bit scattered and vague with its intentions. Cock didn’t need to solve John’s dilemma, but a bit more spine in the examination would have been welcome, as I found myself empathising with John less and less, feeling like he needed a good hard metaphorical slap and some time alone more than anything else, which does weaken the marvellous subject matter. A particularly overlong dinner party scene started to grate as the same conversation goes around in circles and the marvellous, pulsing core of Cock drifted further and further away into Bartlett’s not so subtle amazement with himself. However, these are petty concerns in light of the ‘now’ subject matter (good for him for tackling something so contempo-shocking) and the excitement the audience feel for ideas they may not have considered in any depth, or get to see with fresh eyes, is worth the ticket and makes Cock a must see as a part of this Mardi Gras season.

Whatever problems I had with Barlett’s script however, are overshadowed by a remarkable performances, particularly Matilda Ridgeway whose subtlety of presence and on stage transformation are a revelation. Bartlett writes her with a little too much arch-angel innocence, but Ridgeway cleverly deals with this by expressing herself more as flawed philosopher rather than spiritual healer and therefore the script problems float off virtually unnoticed. Ridgeway is so at home with her character that she naturally exudes a connection with the audience that enfolds them into her well written language. A clever twist of Bartlett’s is that Ridgeway’s character seems almost hampered with the trappings of her sexuality, and when she tries to seduce with the promise of babies and the white picket fence, there is an undertone of disbelief that Ridgeway turns into a triumph of hope over impossibility. Her’s is a standout performance.

Michael Whalley and Matt Minto give compelling performances as John and his lover. Whalley conveys with patient conviction the position of John, who can appear miserably wishy-washy at times. He is an anti-hero and it is to Whalley’s credit that we care about John and remain interested in his choice while we struggle for maintaining our respect. John is an everyman, flawed and relying on others for his salvation, but Whalley brings a much-needed humanity to him so that we are left with a sense that John will be his own man in the end. Matt Minto plays John’s emotionally cruel and yet clinging partner, managing to inject his role with all the humour the script offers (and it is a funny script) and like John, keeping our interest and empathy with a character that is not always likeable. In one of my favourite moments in the play, he reveals he has invited his father to the dinner party John has arranged, successfully balancing the manipulations of John. It made me think John and he were better suited, rather than John be rescued by the saintly virtues of his girlfriend. Brian Meeghan, stepping in at the last-minute as the father is strong in his role, literally bringing the weight of a self satisfied patriarchy into the room. Again, he does a great job of making a rather unpleasant character interesting and someone we can feel for.

Director Shane Bosher has done a wonderful job with his actors, drawing fantastic performances, keeping a very minimal set that uses movement and emotion to convey key themes, which works well. Cock has a lot to say and mostly says it with clarity and strength, butting heads fealessly with contemporary controversies. It’s a great addition to our Mardi Gras festival, and a must see night at the theatre.

← Boy Mets Girl – We are all imposing sterotypes. (Mardi Gras Film Festival Review) Short and Sweet Week 7, where I put it all out there and direct. (Article) →