Posted by lisathatcher on January 22, 2015 in Film Reviews | Leave a comment 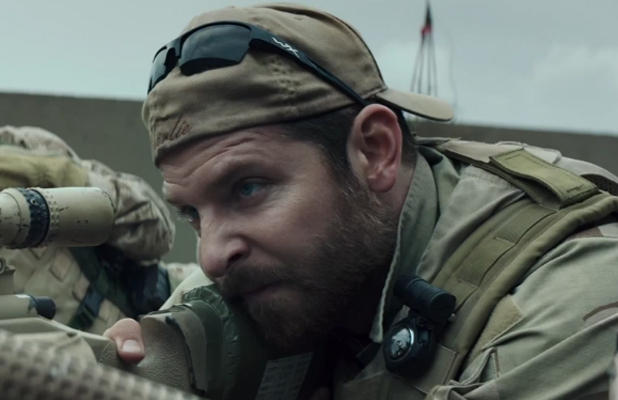 American Sniper is a tribute eulogy to Chris Kyle, fetishising the American hero in the most calculated ways, not the least of which is linking him to The Man With No Name and Dirty Harry. It is a disturbing propaganda piece, of which the man himself would most likely approve, painting a horribly gray morality in simplistic black and white terms. However the biggest underlying inauthenticity of this tale is the treatment of Chris Kyle’s metaphorical death, at the hands of a fellow veteran, on a gun range, a death about which we unsurprisingly know little and even less surprisingly has been indelicately tossed about on the social media pages, as everyone seems desperate to enlist the memory of Chris Kyle as the poster boy for their own particular soap box.

And that above all is, is the story of the American Hero – appropriated symbol used as a vehicle to create, mask and reveal what we clumsily refer to as the truth. After a man like Chris Kyle has been used as a symbol all his life, whose morality has been formed by a strict adherence to God and Country, there is little left for him other than to be used by those icons even after his death. A far more interesting and fresh question about Chris Kyle would be the one about fame and notoriety, and the cost of devoting a life to living up to a symbol that can never be realised. Then, the question around his death and what his fame might have contributed to that. 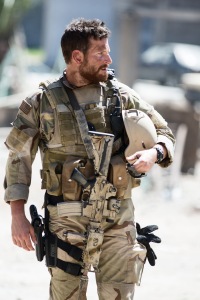 American Sniper is the story of Chris Kyle, a Texas boy who enlisted after 9/11 because he wanted to “kill terrorists”. Kyle becomes a Navy Seal and goes on to achieve his own level of fame for his number of confirmed kills as a sniper in Iraq. The pain of war haunts him, and he suffers his own TSD, eventually finding the courage to leave the war (where he was a day-to-day super man) and be with his wife and family, where he took daily solace working with war veterans and writing his biography after which the film follows. Eventually, he and a friend were killed, after taking a severely mentally ill veteran to a shooting range. Eddie Ray Routh claims he killed Chris Kyle because he was afraid for his life.

So American Sniper is a film that dwells uncomfortably on the horrors of war (one particularly horrible scene, perpetuated by an Iraqi known as ‘The Butcher’ is replayed through flashbacks and references throughout the entire film) and the man’s man world of Chris Kyle (who I will add, does seem to be a very warm and likeable person) skirting around the complexities of Kyle’s post traumatic stress and his very public tragic death. Clint Eastwood has no problem manifesting the dubious heroes he has played in the past through small dialogue and action clichés linking himself very comfortably with Kyle, which is fitting in a way, because as American Sniper shows, there is little difference between the hero as films portray them and heroes in real life. In other words, Dirty Harry and A fist full of Dollars are telling the truth, and men like Chris Kyle are stifled and buried if you don’t give them events like war in order for them to play out their brilliance.

In this way, American Sniper does make a strong link between film and the war veteran, and the importance of each role in perpetuating the mythologies of the heroe archetype. It reminded me of Josh Oppenheimer film The Act of Killing, when vigilantes killing communists (now treated as celebrity national heroes in Indonesia just as Chris Kyle is in American) watched old film noir gangster films before they would embark on a murder spree. Eastwood moves for something only slightly subtler when he makes this film, the implication being Eastwood is the right man to make a film about Chris Kyle, because as an actor playing Dirty Harry, he knows what it is like to be a hero and can get into Kyle’s psyche better than anyone. Unfortunately that is probably true to an extent, but American Sniper is anything but a journey through a man’s psyche, rather it is the insistence that truth justice and the American way can heal all wounds and that even dying at the hand of a fellow soldier so damaged by their mutual experience he can no longer tell friend from foe, is a noble end for a man who believes.

Bradley Cooper does his best with the material, and he has obviously been chosen for his nice boy persona, to be a modern version of the old Eastwood heroes, but he struggles to make something of so light weight and empty a script. All the best moments are when Cooper says nothing, but stares and the audience are left to place their own interpretation on events. He has one of those frustrating mumble accents that means many words are left out anyway, as he big-blokes his way through event after event designed to make him look more and more like the humble hero.

Sienna Miller does her best with the worst of clichéd roles, as the wife who demands the hero become a good father or else she’ll leave him, making it appear that ‘all those folk back home just don’t understand’. For the most part she is just another shrill, shrewish woman, who is unbearably thin – hereos eat first it seems. Her character couldn’t be more poorly written, going from feisty chick in a bar, refusing Cooper’s advances to happy bride, and stay home mum in two or three barely noticeable steps. One aspect of the film that strikes a note is the perfectly routine conversations between Kyle and his wife as he is dodging bullets in a war zone, giving a startling insight into the realities of modern warfare.

So American Sniper is a film that uses Chris Kyle, yet again as a poster boy, but as I said above, it’s a use already sanctioned by Kyle in his life, so one can’t accuse it of deceit in that sense. It engages with the most superficial aspects of Chris Kyle’s life while abandoning anything more complex in order to pretend they don’t exist. I guess the films value is determined by your peace with that. 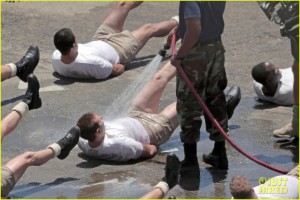