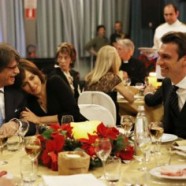 Posted by lisathatcher on December 6, 2014 in Film Reviews | Leave a comment

Human Capital is showing at The Sydney Film Festival

Human Capital is the title given to the result of a process by insurance assessors to estimate a victim’s net worth at the point of pay out. It’s a great term for a film about the struggles of a middle class wannabee and a capitalist mogul who head up families they really have no control over. Director Paolo Virzi, whose two better known works, Caterina in the Big City and Il Caimano I am unfamiliar with copped a lot of bad press pre screenings over the way he and cinematographer Jérôme Alméras depict Brianza, near Milan as a cold area, alternately whitewashed with an unforgiving snow and a grey pallid sludge. The film has left-wing overtones, but its one of those clever pieces that has managed to balance negative right-wing accusations of bias against negative left-wing accusations of anemic posturing, so that it inevitably comes across as fairly balanced. Human Capital has taken the book ‘Human Capital’ by American writer Stephen Amidon as its foundation, seamlessly transporting it to Italy, and including structural changes such as a repeat of the plot from four different chapter perspectives that works remarkably well. But the true strength of Human Capital is in Virzi’s characterisation as well as a restrained editing that contributes to plot suspense that makes the film unusually engrossing.

A man is riding his push bike along a road at night. He rides alone and wears a muted red jacket with almost no reflectors or lights on him. As he rides, cars whizz by, and eventually one of these, a motley SUV, hits him on the road, pushing him into a ditch where he lays wounded as the vehicle continues to drive into the night. The film then moves to the next day when Dino (Fabrizio Bentivoglio) drops his daughter Serena (Matilde Gioli) off at her boyfriend’s house. Her boyfriend is Massimiliano Bernaschi (Guglielmo Pinelli) a playboy-in-the-making son of capitalist moguls Giovani and Carla Bernaschi (Fabrizio Gifuni and Valeria Bruni Tedeschi) a local privileged family whose wealth and reputation immediately impress Dino into embarrassingly forcing his way into a tennis match in order to strike a friendship with the impressively wealthy Giovani. Soon he is asking to buy into their hedge fund, and reluctantly, but still relatively easily, Giovani agrees.Thus begins the journey through Dino’s story, a man who will gamble everything, even the roof over his head while his wife Valeria Golino (Roberta Morelli) is pregnant with their twins. At one point he even accuses her of being “oversensitive” when she insists on him taking her to the hospital and away from a snooty reception because she is afraid she is having early contractions. 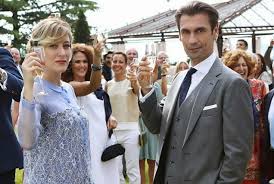 This story is posited against that of Carla Bernaschi,  and the chapter move to her story strikes a rather significant change in tone, unsettling if it weren’t for the commanding performance of Valeria Bruni Tedeschi, who plays the hopelessly impotent trophy wife of Giovani trapped between her easy life as a woman who never had to worry and her far too late desire to engage in a project for herself.  A scene of her in tears in her car when her husband ruthlessly strips money away from her is spectacular and beautifully wrought, her anguish coming from the awareness of years of a useless life. Even her voice is high-pitched and squeaky, like a little girls, and she has no power to prevent her bully of a husband attacking her and her son in the name of keeping their lifestyle afloat as he watches his hedge fund going down. The SUV belongs to her son Massimiliano, who claims he wasn’t driving it at the time, yet his father, determined to see him as worthless insists that he has performed a hit and run. Serena was in the car with Massimiliano at the time, and so the two families, trapped in their impending economic demise bang against each other in desperation. Suspense rises as pressure is applied to each family, and the audience want to know who would hit a man on a bike with a car and then drive off. 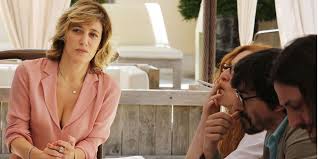 At this point the film changes its trajectory again, but the depth of characterisation and the fascination built up by Virzi ensure no sense of  discomposure occurs as the story unfolds through the young Serena’s eyes, partially due to another great performance by newcomer Matilde Gioli as the daughter trapped in the middle of it all.  Jérôme Alméras changes the visual style as the different stories come through and Serena’s is secreted in a darkness we all feel as the narrative moves toward its unpredictable climax. The tone is sharply contrasted with Carla’s story, whose frames are shrouded in the muted bluish glow of light reflected off the snow. The strength of Human Capital is that we learn more about each character, previously in the background or presented through the interpretation of the protagonist, as the different stories or perspectives come to the fore, and what is most startling is how different they are from our first assumptions when we saw them through anothers eyes. Because of Virzi’s great command of subject matter and the very cleverly constructed editing, we have many stories in one revolving around us, coming to the foreground in key moments, keeping us breathlessly entranced with the lives of people we may not even like very much. It makes for gripping, beautifully constructed cinema. 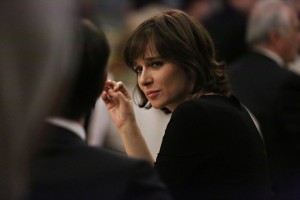