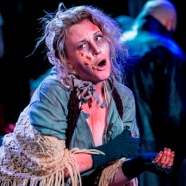 Posted by lisathatcher on December 5, 2014 in Theatre | Leave a comment 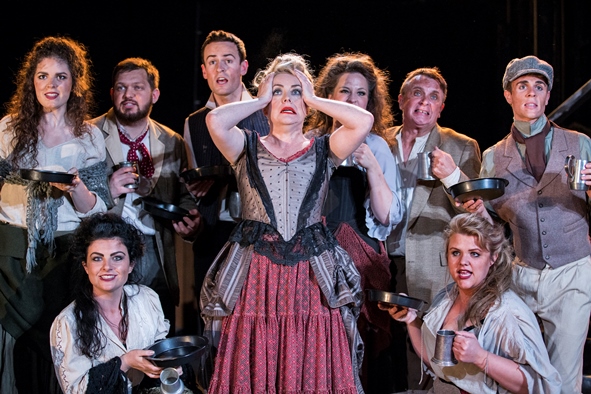 Stephen Sondheim has said Sweeny Todd is a tale of obsession and revenge and how vengeance can consume a person prone to it. It has also been said to be about capitalism, the tyranny of class and the assumed privilege of the wealthy. However, this perspective changes when the play is observed through female eyes, and  Sweeny Todd becomes about the prize of female virginity, a value decided by men, based on the female as a commodity to enhance social standing, ego orientation and the males remarkable ability to convert a virgin to an adoring slave. Joanna is valuable because she is untouched, and it is assumed that the man who touches her with his magic penis will own her forever, whereas Mrs Lovett and Lucy have each lost their value because of the penis traffic already passing through them; they seem shockingly immune to penis power, in their struggle for survival. The behaviours of the three women revolve around them adapting to their lot to avoid starvation (or a razor, or a fire) simply because the men around them, for whatever arbitrary reason, toss them to the side, eliminating any possibility of success in the game of survival of the most able to adapt. In this case, it is not at all about revenge, but rather ego and the lengths a man will go to in order to right the wrong caused by another man who defeated him in a game he set up.

There is a great deal of emphasis placed on the esoteric might of the penis in Sweeny Todd. It had the power to destroy Lucy forever, it had the power to rob Benjamin Barker of his much-loved wife, subsequently blinding him to her in any guise other than “pre-defilement” and it has the power to bind Joanna to whomever gets between her legs first. The two great penis symbols are the razor and the gavel (Sweeny Todd even calls his razor an extension of his arms he raises it, as if we need reminding it has become a body part) each used in a swashbuckling style to duke it out over the prize, which is an idealised version of a female that can be controlled and tamed by mystical penis power. It’s a ludicrous premise saved only by a kitsch reaching back to the days of the Grand Guignol, a pirate-esque (at least it is now Johnny Depp has taken possession) sheen and the setting of  1846 to save it – a decade or so before Sigmund Freud was born, a man who would have had a lot to say about Sweeny Todd I’m guessing. A cigar is never just a cigar in Sondheim and Wheelers Sweeny Todd, and a razor is never just a razor.

Still, I contend on the top of all that, when recognised for what it is, Sweeny Todd is improved by this observation, certainly funnier, and revealing something much more interesting about the question of violence in our society. Psychoanalysis have been telling us for decades that male pattern violence is about penis envy and insecurity, and rarely do we get the pleasure of seeing this as clearly on display as we do in Sweeny Todd. It is superbly manifest currently at The New Theatre in Newtown under the enormously competent direction of Giles Gartrell-Mills and perhaps it is the clever campiness of this particular version that brings all this to light? In his directors notes, Gartrell-Mills emphasises the transformation of Sweeny Todd after spending his “Fifteen years, rotting in a living hell, dreaming…” in a horrible place called Australia. His fifteen years of toil were not enough for hm to experience any kind of love for our country – something artists down under not-so-secretly empathise with – but instead they were put to the good use of planning and organising vengeance on behalf of his offended penis. However, in his desire to properly represent the dark night of the soul so many of the characters in Sweeny Todd experience, Gartrell-Mills has included the Judge’s version of ‘Johanna’ and the Beggar Woman’s ‘Lullaby’, two pieces often left out when smaller scale productions are ambitious enough to tackle such a large work.

Whatever your opinions of Sweeny Todd and the pleasures of ruminating on its subterranean messages, this is a terrific version of the now very famous play/musical/opera, with a strong cast, great ensemble and astonishingly potent contribution by Liam Kemp as musical director. Kemp pounds away relentlessly on piano and organ as Anastasya Lonergan and Laura Mackinnon meticulously craft a large orchestral feel through their violin and bass, properly alternating between evocative performance and subtle support with the kind of ease that only comes from practised skill. The cast is well selected, the highlight of which is Lucy Miller (what a year she’s had) as Mrs Lovett, whose ‘Worst Pies in London’ rivals Angela Lansbury’s. Justin Cotta is an enigmatic Sweeny, his dark talents perfectly suited for this role as he so easily embodies the villain we fear and love in equal measure. Cotta and Miller are large theatre presences, and supported by Kemp’s well-rounded sound, one always has the sense this production is far larger than the sum of its parts. There isn’t a step out of place here, with even Byron Watson as Judge Turpin, initially thought to be too slight to play the super-villian coming forth strongly with his beautiful voice. Sweeny Todd is a large play, with complex musical structures and blurred genre tropes, musically forging its way into something new, even if it assumes an ability from the male physiognomy that, rationally is well beyond its ‘grasp.’ It’s a great play, and an important one, and this production at The New Theatre is an excellent addition to its long and fruitful life.

PS – MUST mention amazing set design by Anthony Suggs and Jo Jewitt, thrilling costumes by Brodie Simpson and superb choreography by Trent Kidd. So many talented people go into making this a wonderful night at the theatre.)

← Articles at the Essential Human Capital – Paolo Virzi and the layers under Human Skin. (Film Review) →