Home » Articles » A sad farewell to SITCO and the end of an era at the Old Fitz Theatre. (Article) 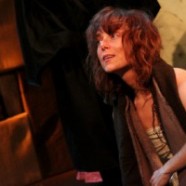 A sad farewell to SITCO and the end of an era at the Old Fitz Theatre. (Article)

Posted by lisathatcher on November 24, 2014 in Articles | Leave a comment

They say all good things must come to an end, and while this is nearly always true, very rarely do things come to as abrupt an end as the one forced on the successful Sydney Independent Theatre Company, the enormously experienced talent of Julie Baz and David Jeffrey. It heralds the end of a fantastic relationship between SITCO and the gorgeous Old Fitz Theatre that will never be back, and in the circles I’ve been moving in, lamentations for that  – up until recently at least – perfect marriage have hit hard. There are many high quality indie theatres in Sydney, each with its own unique style, some almost underground, others mostly professional, but the value of the theatre space always lies in its relationship to the theatre company, and rarely has that been as simply and yet powerfully expressed as all that SITCO brought to the Old Fitz theatre. So, we’ve lost that forever, and whatever new companies come and go in the future, they have a lot of work cut out for them to match the wit, bohemian vibe and professionalism of SITCO. 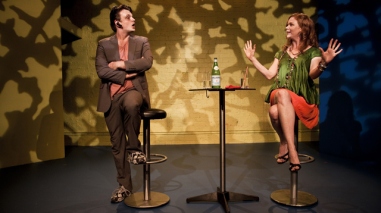 However, this is an article to think back over all that SITCO has achieved at The Old Fitz. I had a chance to talk to Julie and David about their reflections on their Old Fitz experience, and it gave me a chance to think about some of the brilliant productions, directors performances, set and costume designs I’ve been lucky enough to see on that stage. SITCO housed one of my two favourite productions of 2014 (Scenes from an Execution with the incredible Lucy Miller) as well as other favourites such as Wittenberg and Joan Again. SITCO have had brilliant productions by great Australian writers such as Daniela Georgi’s Friday and Lies, Love and Hitler by Elizabeth Avery Scott. They’ve housed some great Shakespeare, my particular favourite being 2013’s King Lear (Jasper Garner-Gore’s fool still haunts me) and searing monologues such as Thom Pain with David Jeffrey and Brevity theatre companies Fully committed with the fantastic Nick Curnow. They’ve seen incredible established directors like Kate Gaul and Rodney Fisher do great things on their stage, but they’ve also nurtured fresh creative talents like Richard Hilliar, and the fantastic collaborative direction of Samantha Young, Andrew Wilson, Peter Mountford, Alistair Wallace on Neil LaBute’s The Mercy Seat, another production I loved in 2014. 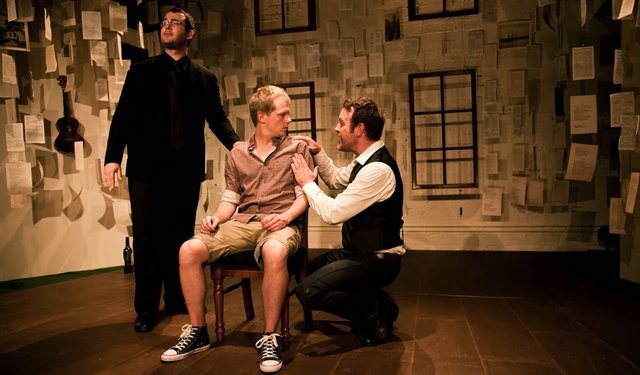 So, I had a chance to ask Julie and David about some of their favourite moments at The Old Fitz Theatre, which they gave me,  with Julie’s reliable eloquence and Dave’s unbeatable dry wit.

Lisa – Which SITCO production at The Old Fitz do you remember the most, and why is that?

Julie – the very first one we did – we had 6 weeks to renovate the theatre, find, cast, design and rehearse our first play which ended up being a Sydney premiere of an Australian period piece – it was a very intense, but rewarding time.

Dave –  Thom Pain (based on nothing). It was the most challenging text I have ever had to work with, and my first one man show. A true love hate experience. But the hate has all gone now. 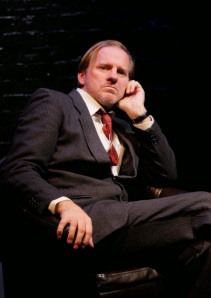 Lisa – What, do you think, are the great successes of SITCO’s time at The Old Fitz?

Julie – Our wonderfully supportive audiences, who we’ve had the pleasure of entertaining with over 30 productions, including several new Australian works, during our tenure at the Old Fitzroy Theatre. We also revitalized the theatre, made the stage area more versatile, comfortable and accessible for both audiences and indie companies using it. As well, we connected with many of the local characters in the hotel – all of whom we will miss very much when we leave.

Lisa – What do you love about independent theatre and why is it important to Sydney’s culture?

Julie – I love the intensity and creativity necessary to make theatre with high production values on small budgets and with limited resources. Indie theatre is important to Sydney’s culture because it provides opportunities for 95% of Sydney’s arts practitioners. It also enables audience to immerse themselves in the thrill of live theatre in the small venues where indie theatre takes place, meet the actors, and really feel a part of Sydney’s cultural life.

Dave –  The freedom to stage almost anything. 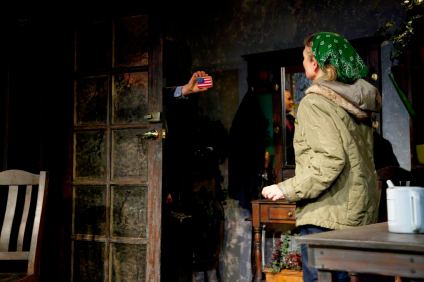 Lisa – We all know about the difficulties in performing, directing and producing theatre, but what are the insane pleasures that keep two such talented people as yourselves committed to the all too often thankless tasks?

Julie – Pure necessity, and if I’m honest, I’m a complete control freak, so wearing many hats is usually OK with me. Although the lack of sleep is a problem at times!

Dave – Doing something with your life that involves all of your faculties at once with a deadline looming. Ohh the pressure! But what a payoff when you finally open. 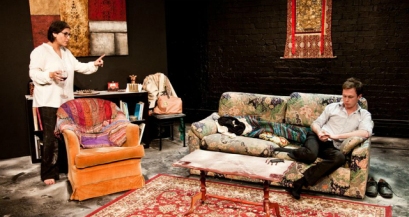 Lisa – Do you have a favourite production over the Old Fitz years? Which one? Why?

Julie – Taking our own productions out of the equation, my favourite was Lies, Love and Hitler by Elizabeth Avery-Scott. It was the Sydney premiere of an Australian play by Canberra based CADA Productions. Besides being well written and performed, the company were a pleasure to deal with. The most impressive thing about the production and those involved for me was, that despite the high-brow subject matter, everything about the production lacked pretension, and was brimming with integrity and a pure love of theatre – in my mind, these things are more valuable than anything else.

Lisa – Theatre is more than precise production values. What qualities, outside of “well rehearsed” do you think matter most in a successful production?

Julie – Learning how to achieve high production values, with limited resources happens over time to those who value these things (and we certainly do). But what matters most to me as per my answer to Q5 is no pretension, lots of integrity, and a pure love of theatre.

Dave – A happy audience when the curtain comes down. 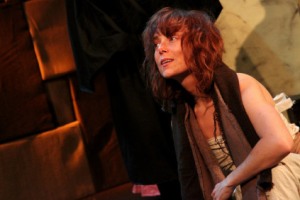 Lisa – What’s next for SITCO?

Julie – We are currently in the process of securing another independent theatre venue in Sydney for 2015. We very much look forward to being a part of and helping the indie theatre sector thrive for many years to come.

Dave – Excitement for the venture just around the corner, but a few nights off in between will be very relaxing. 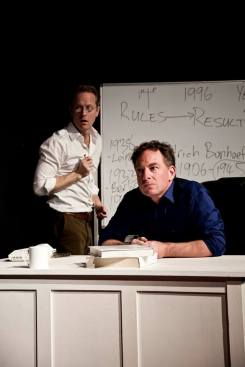 I then had a chance to ask Julie some questions:

Lisa – One of the things I loved the most about SITCO at The Old Fitz was the sense of warmth you projected toward all the artists that was the perfect balance between a bohemian Kings Cross aesthetic and professional theatre company. How did you keep your composure and your generosity through a time that must have included a lot of frustration for those same artists?

Julie – We’ve collaborated with some incredible people and have been truly inspired by the dedication and breadth of talent among Australia’s independent theatre makers. However, there is always lots of ‘drama at drama’ as I like to word it in independent theatre. The people management skills required are enormous – I am better at this at some times than others. It’s not always possible, but ultimately, we try to work with like-minded people who (as I mentioned previously) lack pretension, have integrity and have a pure love of theatre.

Lisa – What do you like the most about discovering new writing?

Julie – It’s an obvious thing to say, but new work is exciting because it’s never been seen or heard before by anyone. This said, in my opinion you have to treat every production like it’s the first time it has been performed. Otherwise the authenticity of all elements risk being compromised. The difference is that you can (and should) research previous productions, what’s written about them etc.  When developing new work, everything (except perhaps the genre of the work) is untested – the level of innovation, invention and risk required is intensified – and that’s really exciting – though unfortunately not usually commercially viable – human nature’s propensity to be risk averse means that people often find new work difficult to trust.

Lisa – Do you prefer performing, stage design and directing or production? You seem to fit so easily into all those roles, and yet they are each so different and have such a different relationship to a play.

Dave – Acting is what I love more than all, I love to let a character evolve from the text & direction. It’s an inside out thing with me, and so I try not to force anything.

Lisa – Your marvelous pre-show call to abandon phones, empty the theatre at half time so “we can fluff the pillows” and don’t forget to feed the cast alcohol in the front bar after the show will be sorely missed at The Old Fitz. I always have the sense I’m being ushered onto a rollercoaster when you so casually introduce each show with that glint in your eye. How do you keep that cheeky freshness when so much of what SITCO does at The Old Fitz is carefully planned and organized?

Dave – My history with improv & street theatre kicks in whenever I have a captive audience. I do love a stage!

And we have loved SITCO at The Old Fitzroy Theatre.

Thanks so much to Julie and Dave for their hard work, and don’t forget to take a second to tell them which was your favourite production of the glory years at The Old Fitz and why. 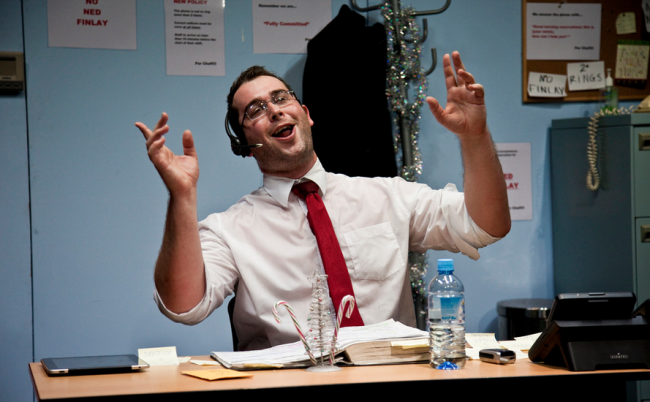