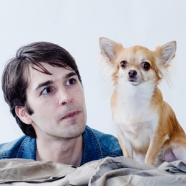 Posted by lisathatcher on November 9, 2014 in Theatre | Leave a comment

Unhappen  – You can buy your tickets here.

One of the most surprising and brilliant confrontations in Rob Hayes’ Awkward Conversations with Animals I’ve Fucked, is that the title isn’t a metaphor or allegory, and that isn’t a problem. I’m not sure if this constitutes a spoiler, but there are five conversations Bobby (Heath Ivey-Law) will have with his animal lovers starting with the play’s immediate opening of Bobby and a dog on a bed embarking upon the post-coital chat. In other versions of this play, Bobby will write ‘dog’ on a board or indicate dog in some way, but to add to our discomfort, director James Dalton brings performers in with masks who act like the animals they are. Bobby’s dog monologue includes PC overtones and questions of discrimination, making it clear that Bobby is conscious of exploitation and that possibly this behavior is more acceptable than our culture currently deems. This, along side Bobby’s obviously harmless loneliness and desire for deep connection with a significant other rather remarkably obliterate any feelings of revulsion we might have for the style of sex the pair have just engaged in. This, when we are rarely spared details that repeatedly bring us close to the act and away from the safety of allegory. In fact, Rob Hayes manages the make the play lonely, and yet deeply lovely including some very clear statements about the ability sex has to separate us from each other, just as it can unite us.

However, any intention to derive meaning from Awkward Conversations with Animals I’ve Fucked or to relate it to one’s own sexual experiences (!) is constantly interrupted by the changing trajectory of Hayes monologue. He clearly never wants the audience to settle into passivity, and moves the narrative arc away from our need to frame it at every turn. If we think its about socially rejected sexual perversions (such as pedophilia) he overemphasises the animals consent. Just as we think it is about loneliness, mental illness, or patricide, he shifts it all again into the realm of sex and death, only to turn back to subjecting oneself to the pleasure of others for the sake of connection. Mostly, what becomes important is that we can’t tell who Bobby is, not by his behaviors, nor by his awkward conversations, and we are better to resist the urge to try. We live in a world that is trying to understand those on the margins before we categorise or judge them. Maybe Bobby is one of those?

Although a series of monologues, James Dalton directs Awkward Conversations with Animals I’ve Fucked as real encounters with present animal others, played by Fran Middleton and Cody Ross. Middleton and Ross perform as animals bringing the very real concept of zoophilia into the room with their pithy performances. Heath Ivey-Law is Bobby, a character drastically caught in the unlikely crossover between the intimacy of theatre and the horror of social outcast, who draws us into his quixotic psyche, shocking us with its similarities to our own. Ivey-Law is handsome, charismatic and unnervingly convincing as a man romantically attracted to animals, whose performance regularly evokes that strange relationship we have with domesticated pets who we label as ‘ours’ even though morally we should never claim them as chattels. As I said above, Rob Hayes is too clever to let us rest with any particular meaning, so the play is never ‘about’ the health of our connection to our domestic animal friends, but Ivey-Law is so every-man and no-man at the same time, we can’t help but equate his alien experiences to our own romantic attachments with lovers and even, at times, our platonic relationship with our pets. By avoiding meaning, Hayes invites every interpretation and this, in its own way, realises the danger of theatre in revealing aspects of yourself you’d really rather not examine.

This is all-importantly framed by single lines of Ben Brockman lights, acting as both social context (they convert easily from Bobby’s apartment to his barn) and surreal ambiance for the increasing strangeness of Bobby’s internal world as he allows himself to delve deeper and deeper into his search for intimacy. The sex acts themselves (yes, they’re there) are solo actions (isn’t all sex with another ultimately a solitary act?) that take place in the transitional space of a lit doorway, the emotionally charged moments exemplified by strobe-noir flashes of light all over Bobby’s convulsing body. James Dalton, always an optic director, successfully extends Bobby’s world far beyond his mind into the resplendent trauma of those crucial actions we take that turn themselves into defining events. Theatre with James Dalton is always big, challenging and defiant, as much as it is through-provoking and disarmingly charming and this production is no different.

Awkward Conversations with Animals I’ve Fucked is another winner for the Unhappen group. This run at the Old 505 theatre is short, so grab a chance to see it if you can.

← Dalylight Saving – Nick Enright and the dominance of the sitcom. (Theatre review) Interstellar – It’s better than you think. (Film review) →